What’s going on with the dollar?

The dollar has pulled back in recent days after its US elections-inspired rally faded as investors made a more sober assessment of the whole political and economic situation there and realised that the currency had gone up too far, too fast...

The dollar has pulled back in recent days after its US elections-inspired rally faded as investors made a more sober assessment of the whole political and economic situation there and realised that the currency had gone up too far, too fast. In the US nothing has changed yet and it will be a while before president-elect Donald Trump’s fiscal plans will be put into action. Investors have also realised that a potential rate rise in December was already baked in the price, which may also explain why the dollar has refused to go further higher despite the release more forecast-beating economic data out of the US. Among other things, we’ve seen in recent days an upward revision in third quarter GDP, decent monthly employment figures and the latest ISM services PMI came in well ahead of expectations as it rose for the 82nd month in a row. Yet the Dollar Index has fallen back to around 100 from its highs of 102 a couple of weeks ago.

It appears as though investors are waiting to find out how aggressive or otherwise the Fed will be in tightening its policy in 2017. We will have an indication of that at the Fed’s last meeting of the year next week. In addition to the dollar weakness, foreign currencies have also bounced back. The euro and pound, for example, have both found good support in recent days. The euro has stabilised somewhat due to improvement in Eurozone data and ahead of the ECB meeting on Thursday when Mario Draghi may talk up the prospects of extending QE. If so, this could trigger a sell-off in the EUR/USD exchange rate and underpin the Dollar Index. Conversely, any tapering talk could send the EUR/USD surging higher, and DXY lower.

But fundamentally, our long term bullish outlook on the dollar has not changed. We think that the widening disparity between monetary policy stances in the US with Europe, UK and Japan will keep the dollar underpinned for a long time. Thus what we are seeing right now could be a normal retracement rather than a trend reversal for the dollar.

In fact the Dollar Index could very well bounce back if the broken resistance area in the 100.00 region turns into support now. It is a massive level, make no mistake about it. There is the potential that it will create a false breakdown to trap the sellers before it bounces back, so watch out for that possibility. It could for example break 100 and drop to 99.00/10 area (old resistance) before bouncing back strongly. In any case, a move back above 100.50 or ideally 101.50 would re-establish the bullish trend. Our technical bullish bias would become invalid however if the DXY breaks below support at 99.00. 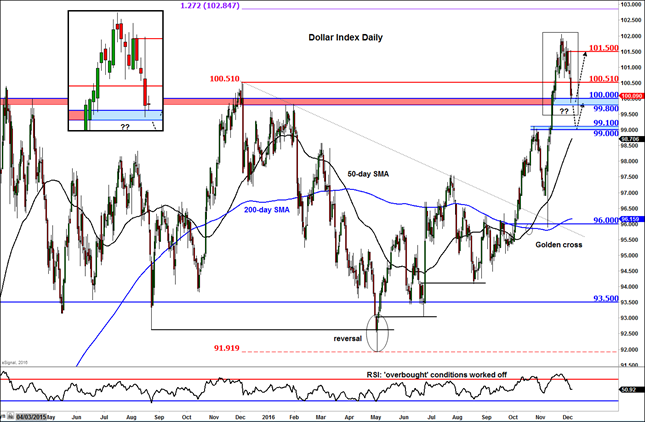