Alibaba Q1 preview: Where next for BABA stock?

Alibaba shares remain under pressure amid Covid-19 disruption and slower economic growth in China, against a wider backdrop of rising US-China tensions.

When will Alibaba release Q1 earnings?

Alibaba is scheduled to release first quarter earnings before US markets open on Thursday August 4. The Chinese company, which is dual listed in the US and Hong Kong, will hold a conference call on the same day at 0730 ET, or 1930 in Hong Kong.

Wall Street forecasts Alibaba will report a 1% year-on-year drop in revenue to RMB203,698 million and expect adjusted earnings per ADS to plunge 38% to RMB10.22.

Alibaba reported the slowest revenue growth on record in the last quarter, when it also suspended its guidance as China’s zero-tolerance approach to Covid-19 continues to plague the outlook. Things are set to remain tough this time around considering analysts believe it will report the first drop in sales on record since it went public back in 2014.

The drop in revenue will be driven by a 60% drop in sales from its international ecommerce arm and a 3.8% decline in demand digital media and entertainment division. This will only be partly countered by tepid 0.9% ecommerce sales growth from its core operation in China, higher demand for its delivery services like Ele.me, and a 14% jump in cloud computing revenue. Analysts expect Alibaba to have ended June with 913.6 million annual active consumers, up over 10% from the year before but a notable drop from the 1.31 billion it had at the end of March.

With this in mind, it is worth remembering that only its core ecommerce unit in China and its much smaller but higher-margin cloud computing unit generate profits, enough to offset the losses from its broad array of other ventures.

And those profits are being squeezed as the growth in the Chinese economy slows, partly thanks to the country’s zero-tolerance approach toward Covid-19, and costs continue to rise. Its adjusted Ebitda margin is forecast to come in at just 17% in the first quarter compared to 24% the year before.

Although there is no guidance to go on, investors will be hoping for rosier commentary around its prospects as Covid-19 restrictions in China have eased. Analysts believe sales will recover and grow some 7.7% over the full financial year to the end of March 2023, although adjusted earnings are forecast to decline 17.8%, marking the second consecutive annual drop, as inflation continues to push up costs.

Alibaba recently said it was upgrading to a primary listing in Hong Kong amid the threat it could be forced to delist from US exchanges alongside hundreds of other Chinese stocks. Alibaba is among those on a list of companies that are failing to meet US audit requirements that could force them all to be booted off American exchanges.

The US requires all listed companies to be audited by regulators, but China has blocked access to foreign entities. Both countries have been negotiating in the hope of finding a resolution, which now looks vital if Alibaba and others are going to remain listed in the US. The fact there is now a shift as companies try to shore-up listings elsewhere, predominantly in Hong Kong, should not be surprising. It is important to remember they do not want to abandon their presence in the US, but the unwelcome environment forcing them to take action. Alibaba has said it is striving to maintain both its listings in New York and Hong Kong.

That feeds into wider political and regulatory turmoil for Chinese companies, which have seen hundreds of billions wiped off their valuations in recent years thanks to a regulatory crackdown as China tries to get a better grip over the power of the country’s largest and most influential tech companies. Although there were hopes that the government was set to draw a line under the crackdown earlier this year, the threat of further action still lingers.

With that in mind, the latest blow could be one of the biggest yet after the Wall Street Journal reported Alibaba’s founder Jack Ma – who has vanished from public view since stepping down as Alibaba’s chair in 2019 after butting heads with regulators – is set to cede control of Ant Group. Ant Group is the financial services giant that was due to complete a blockbuster IPO – which would have been the world’s largest-ever listing - back in 2020 before it was scuppered by Chinese regulators that has since forced it restructure itself and review its listing plans.

Ma is thought to directly own around 10% of Ant Group but has ultimate control with over a 50% stake through other entities and some of his voting power could be transferred to other directors, including CEO Eric Jing, the WSJ said. The restructuring of Ant Group could allow it to finally achieve its ambitions of going public, but the fear is that a change in voting power could weaken Alibaba’s influence over the business, in which it owns a stake of around 33%. We have already seen evidence that Alibaba and Ant Group are decoupling themselves to address the concerns of regulators, but Alibaba’s stake in the company is still a huge asset that investors need to keep an eye on amid the political pressure.

Alibaba shares have been in consolidation mode since sinking to its lowest level in over six years back in March, with the range having tightened between a floor of $81 and a high of $123. The stock has briefly broken above these levels during the last four months but has swiftly returned.

That provides scope for the update this week to provide a new catalyst that can allow it breakout of this range. The stock has been losing ground after coming under renewed pressure during the past month, and the fact trading volumes have increased during the latest leg of the downtrend suggests this could be gaining traction. The $81 floor should hold firm considering the RSI has slipped into oversold territory below here, but if doesn’t hold then the six-year low of $73.30 will come back into play. Any fall below here opens the door to levels not seen since 2016.

On the upside, the stock needs to break the $123 ceiling that has capped the stock since March and it will have to recapture the 50-day and 100-day moving averages in the meantime. The next target beyond there is $129. The 47 brokers that cover Alibaba believe the selloff has been greatly overdone with an average target price of $159, showing they believe there is over 80% potential upside over the next 12 months. 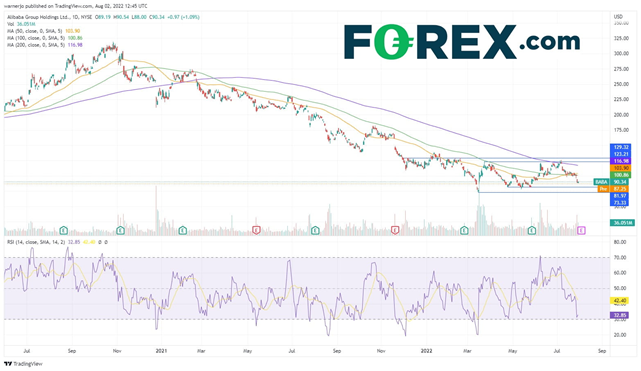