Amazon Q2 preview: where next for Amazon shares?

Amazon is expected to deliver strong growth thanks to Prime Day sales event being brought forward, anticipated growth in its subscription business and growing demand for AWS. We explain the key figures to look out for and consider how Amazon shares could react.

When are the Amazon Q2 earnings?

Amazon will release second quarter results after the markets close on Thursday July 29.

Amazon Q2 earnings: what to expect from the results

Amazon’s guidance issued at the end of the first quarter shows the company is aiming to grow quarterly net sales by 24% to 30% year-on-year to between $110.0 billion and $116.0 billion and for operating income to come in between $4.5 billion and $8.0 billion compared to the $5.8 billion booked the year before.

Analysts are expecting Amazon to hit the top-end of its guidance, anticipating quarterly net sales of $115.14 billion and operating income of $7.7 billion. Building on that, Wall Street expects net income per share to rise to $12.32 per diluted share from $10.30 the year before.

Prime Day, its major annual sales event that is usually held in the third quarter but was brought forward and held on June 21 and 22 this year, will be a major contributor towards its financial targets in the quarter. Globally, over 250 million items were purchased in total by Prime members, more than any previous year. We already know it was the biggest Prime Day event ever for its third-party sellers and that growth for other businesses outpaced that of Amazon’s own retail business. Still, Amazon said its Fire TV Stick 4K and Alexa Voice Remote were the two best-selling products across its platform, which should also help boost the number of people buying-into its subscription ecosystem.

The Prime subscription business is important for Amazon as it boasts a higher-margin compared to its core ecommerce operation. Streaming hours were up 70% in the first quarter and Amazon has stepped up investment in content for its streaming service, and investors will be hoping the launch of new titles such as The Tomorrow War helped attract new users during the quarter.

Amazon Web Services, its cloud-computing business that is the single-biggest driver to the bottom-line, is also expected to deliver strong growth after beating expectations in the last quarter and reporting a growing backlog of work. Bloomberg estimates AWS could deliver constant-currency revenue growth of over 30% as businesses continue to ramp-up their IT spending and sectors such as travel and hospitality reopen.

Amazon shares may have hit fresh all-time highs earlier this month, but brokers remain bullish that the stock can go on to find higher ground. The 53 brokers covering the stock have an average Buy rating on Amazon and a target price of $4264.77 – some 15% higher than the current share price. 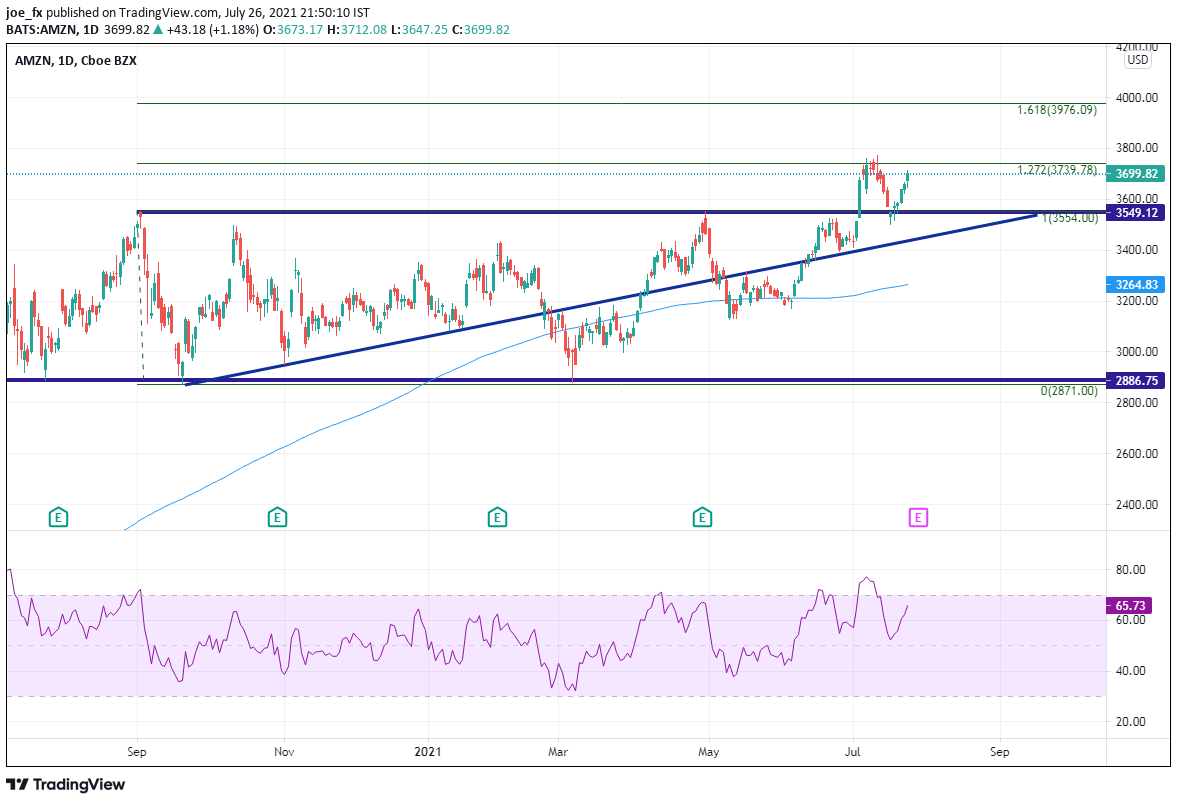