Apple Q2 preview: Where next for Apple stock?

Some analysts believe Apple could moderate its growth expectations for the full year this week amid supply chain headwinds and a cutback in consumer spending.

When will Apple release Q2 2022 earnings?

Apple will publish earnings covering the second quarter of its financial year after US markets close on Thursday April 28.

Sales of hardware, ranging from iPhones and iPads to its Mac computers and wearable devices, is expected to rise just 3.7% from last year to $75.4 billion. That would mark the fifth consecutive quarter of slower year-on-year growth as it continues to come up against tough comparatives from the year before, when product sales soared over 60% as people rushed to buy tech during the pandemic.

Sales of iPhones, which generated over 57% of overall revenue in the last quarter, is expected to nudge up 2.6% to $49.2 billion. Wall Street believes Mac sales will rise 1.4% and that sales of its wearables and home accessories will continue to grow at a faster pace of 15%. That will counter weakness in demand for iPads, which is expected to suffer its second consecutive quarter of lower sales.

The biggest threat to the second quarter results comes from the supply chain. Apple has proven to be resilient amid the challenges facing the tech industry that has been grappling with a shortage in chips and other components as well as bottlenecks and rising costs, all of which have been exacerbated recently by more factories temporarily closing down in China amid fresh Covid-19 outbreaks. Just this week, we saw one of Apple’s major suppliers, Foxconn, temporarily shutdown two more plants in China due to the virus, although it said disruption should be minimal as it has managed to shift production to other sites.

Apple’s services business, encompassing everything from the Apple App Store to its music and TV services, is forecast to report a 17% rise in sales to $19.8 billion. This currently accounts for less than 16% of Apple’s total revenue but the company sees it as key to its long-term prospects as it looks to tap into the billions of people using Apple devices and push higher-margin services onto them.

While markets were previously worried about the problems plaguing supply, concerns have also grown about demand this year amid the inflationary environment and whether the anticipated cutback in consumer spending this year as a result of the cost-of-living crisis could hurt sales of both Apple products and services. Will it prompt people to delay upgrading their iPhone, or force them to cancel subscriptions and digital services?

JPMorgan said in a research note this week that it believes it was a slow start for the global smartphone market in 2022, hurt by weak consumer spending and slowing demand for devices in China. The bank believes Apple could moderate its full year sales guidance this week to reflect ‘both the slowdown in consumer spending as well as tough compares’. It said it forecasts revenue will rise just 2% in the third quarter, which is markedly below the 6% currently pencilled-in by markets. That came just days after a separate report from Counterpoint Research warned demand could also soften in the US.

Costs will also be on the radar as analysts believe total operating expenses will be over 19% higher than last year in the second quarter at $12.6 billion. Costs continue to grow at a markedly faster rate than revenue and that will also cause concern that profitability could suffer after its operating margin contracted in the previous quarter for the first time in over a year.

On a brighter note, some analysts have suggested Apple could leverage its $200 billion in gross cash ($80 billion net) to accelerate its share buyback programme this year, which in turn would help boost EPS and its share price by reducing the number of shares in issue and help counter any weakness in earnings growth this year.

With that in mind, current consensus figures suggest Apple can deliver an 8.2% rise in annual revenue and a 9.5% increase in EPS in 2022, building on the record figures reported last year.

Apple shares have experienced a wild ride since the start of 2022, having swung from all-time record highs of $183 to as low as $150. The stock currently trades at $163.

Shares tested the 200-day sma at $159 before swiftly rebounding yesterday. This has proven to be a reliable floor for the stock since the start of the pandemic back in March 2019. We could see the stock temporarily slip to as low as $150 again depending on how markets react to the results this week but the moving average should hold. 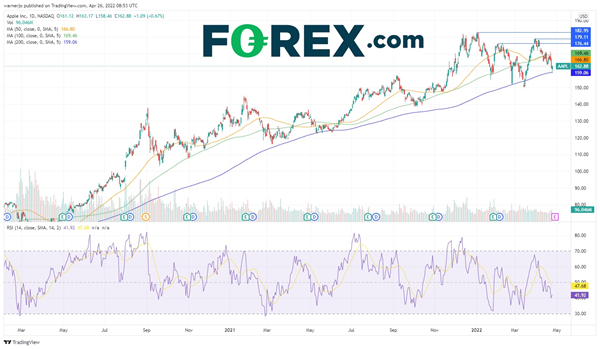