Where next for easyJet shares ahead of its quarterly results?

Airline easyJet is expected to reveal an improved performance when it releases its quarterly results as the travel industry continues to steadily reopen, but passenger numbers will remain well below pre-pandemic levels. We consider where easyJet shares are headed this week.

When will easyJet release its Q3 results?

Airline easyJet is scheduled to release a third-quarter trading update on the morning of Tuesday July 20. This will cover the three months to the end of June.

What to expect from the easyJet results

The situation for easyJet and other airlines continues to steadily improve as countries try to get the travel industry back up and running this summer, but it is far from returning to pre-pandemic levels of activity. EasyJet said it only expected to operate 15% of its pre-pandemic capacity in the third quarter, barely an improvement from the 14% reported in the first half.

Analysts are expecting easyJet to report third-quarter revenue of £206.4 million. This will be a huge improvement from the £7 million booked the year before when virtually all travel was off the table and it compares favourably to the £240.0 million in revenue booked during the entirety of the first half. Still, that would fall far short of the £1.76 billion booked in the third quarter of 2019, before the coronavirus had surfaced.

The airline has said it is utilising ‘significant flexibility’ to adjust capacity to meet the ever-changing travel restrictions across Europe, allowing it to ramp up-or-down as necessary. This is important considering easyJet is expecting capacity to start increasing ‘from June onwards’. However, it warned the ramp-up will lead to an increase in variable costs in the third quarter as it brings pilots and crew off of furlough to prepare for the peak summer season in the fourth quarter.

‘Late announcements of changes to travel restrictions will impact load factors due to late capacity additions/cancellations to meet surges in demand, driving an even later booking behaviour,’ easyJet warned in May.

Still, easyJet has said it is focused on operating a ‘disciplined schedule of cash generative flying’ and is aiming to deliver £500 million of cost savings in the current financial year to help cushion the blow.

The airline, like the wider industry, has refrained from providing any firm guidance for the year due to the uncertain outlook. There is a chance that easyJet could provide some insight into what it expects for the full-year now it has entered the final three months, but investors shouldn’t be surprised if it continues to tread carefully with its outlook considering the rapidly-changing rules for the industry.

The last few weeks have been frustrating for airlines and travellers, with rules chopping and changing week-by-week. The UK has attempted to smoothen out the rules for holidaymakers by allowing double-jabbed passengers to travel to countries on its green and amber lists without the need to quarantine, but the benefits of this are likely to be limited considering other European countries are remaining more cautious.

Most countries remain unaligned when it comes to travel restrictions, making it difficult for travellers, but transport secretary Grant Shapps has said he hopes the European Union and the US will both introduce similar rules for vaccinated travellers ‘later this summer’.

Brokers still believe easyJet is hugely undervalued given its recovery prospects. Brokers currently have a Buy rating on the stock with an average target price of 1095.78 pence per share – some 39% higher than easyJet’s current share price.

Looking at the chart, easyJet shares still haven’t recovered to their pre-COVID highs and, more worryingly for bulls, just broke back below their 200-day exponential moving average last week, extending a two-month series of lower highs and lower lows.

The 14-day RSI indicator is at its lowest level in nearly a full year, signaling strong selling pressure in the stock. While stronger results in this week’s earnings report could help the shares stabilize, the bearish bias will remain intact as long as EZJ remains below its two-month bearish trend line and the 200-day EMA.

Meanwhile, a disappointing earnings release could open the door for a steeper decline toward the confluence of Q1 support and the 61.8% Fibonacci retracement near 700.00 in the coming weeks. 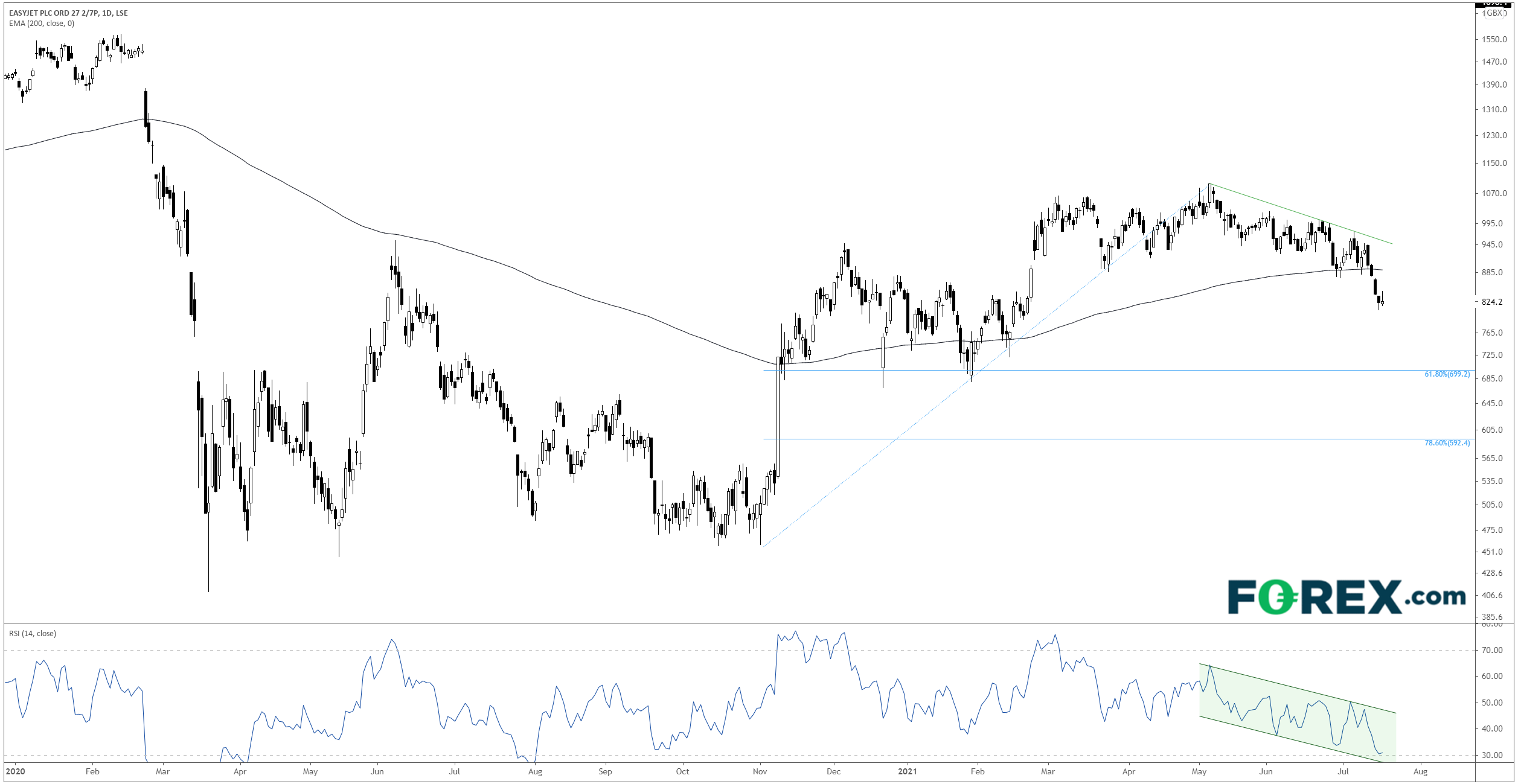 How to trade easyJet shares