Facebook is expected to deliver stellar rates of topline growth in the second quarter, driven by demand for online advertising, but has warned things will become tougher as the year goes on. We outline what to expect and consider how the Facebook share price could react.

Facebook Q2 earnings preview: what to expect from the results

Facebook is expected to continue delivering strong growth in the second quarter of 2021, having beaten expectations for four consecutive quarters. Advertising is set to continue to spur-on topline growth, with Facebook capitalising on a rebound in demand as the economy reopens with higher prices that should be the main driver for revenue growth for the rest of the year.

Overall revenue grew by 48% in the first quarter and Facebook said it expected to see the same pace of growth or for it to ‘modestly accelerate’ in the second. This will be partly helped by the fact it will start to come up against weaker comparable growth from the year before when the pandemic hit.

Daily active users grew by 8% in the first quarter and this number will also be closely watched, especially as investors are keen to know if people remain as engaged with Facebook as the economy reopens and people’s social options open up.

Analysts are expecting Facebook’s quarterly revenue to rise to $27.87 billion from $18.68 billion the year before. Wall Street anticipates net income will jump to $8.73 billion from $5.17 billion and for EPS to surge to $3.03 from $1.80 the year before, with margins expected to continue improving.

Still, there are several potential headwinds that could weigh on growth in the second quarter and subsequent quarters. Regulatory pressure continues to build on the business, and the recent launch of Apple’s new operating system update, iOS 14.5, which has given users the option to stop Facebook and other online advertisers from tracking their web activity, are set to start to bite in the second quarter. However, Facebook has said these challenges have been factored into its outlook.

Plus, the weak comparatives won’t last for long considering Facebook has warned it is expecting revenue growth rates to ‘significantly deaccelerate’ in the third and fourth quarters of the year as it starts to lap increasingly strong growth seen in the latter half of 2020.  So the outlook will be closely watched.

Brokers are bullish on Facebook and its prospects, with 55 brokers touting an average Buy rating on the stock. That is comprised of 19 Strong Buys, 27 Buys, 7 Holds and 2 Sells. However, the average target price of $391.39 suggests there is only around 5.8% potential upside from the current share price.

Facebook enters earnings near recent all-time highs.  Price has been moving higher since putting in pandemic lows in March 2020, near 137.10.  In August 2020, FB put in a new all-time high at 304.67, then pulled back to the 200 Day Moving Average support near 244.61. This began the next up leg of the move and began the start of an ascending wedge (blue). Price took out the previous highs on April 1st and continued moving higher within the wedge in an orderly upward sloping channel (red).

On Friday, Facebook gapped above recent highs at 358.79 and tested the upward sloping trendline of the wedge, near 366.50.  Expectations of ascending wedge are that price will break lower and retrace 100% of the move.  Resistance above is that the top trendline of the channel near 375.00.  However, note that the RSI has been diverging with price since the beginning of April.  Could this be the time for a pullback? First support is at the previous highs near 358.79 then the confluence of horizontal support and the bottom trendline of the channel near 333.25/335.00. 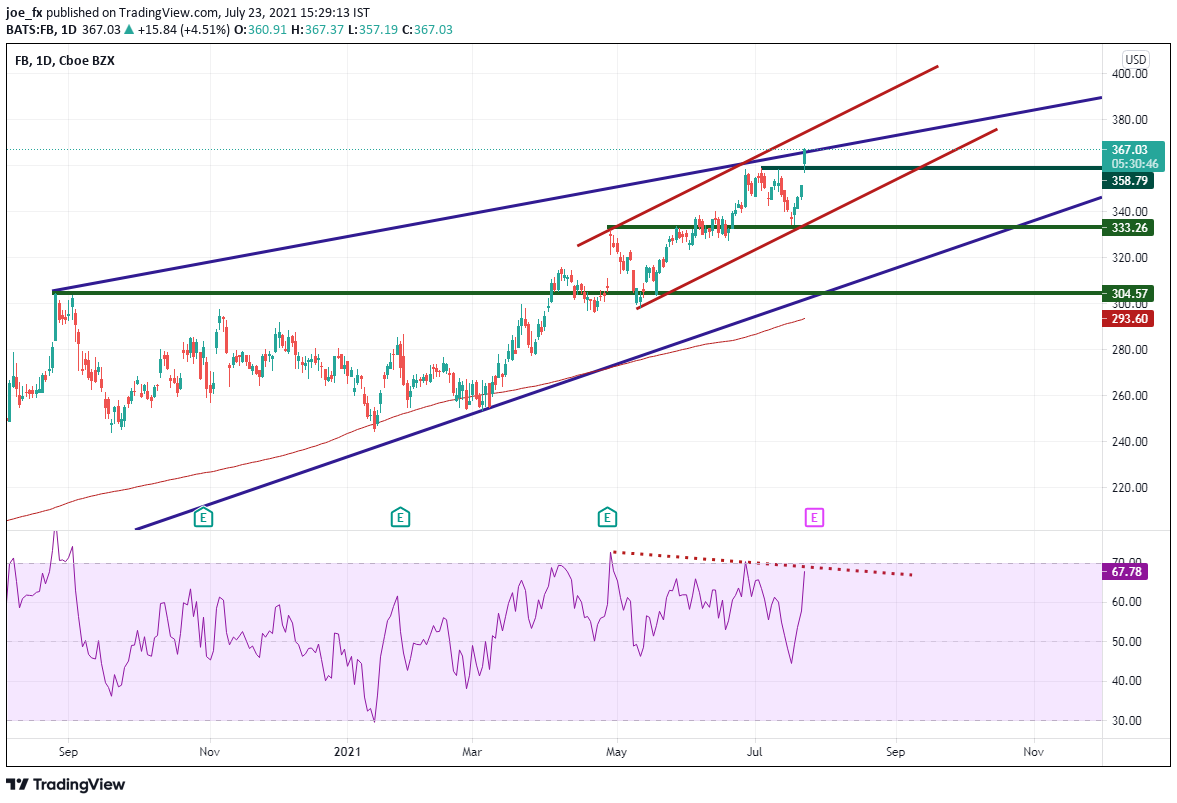 You can trade Facebook shares with Forex.com in just four steps: