JPMorgan Q1 preview: Where next for JPM stock?

JPMorgan will kick off US earnings season, with markets keenly watching to see how the bank is performing amid a myriad of challenges.

When will JPMorgan release Q1 2022 earnings?

JPMorgan is scheduled to publish first quarter earnings before US markets open on Wednesday April 13.

It will be the first major US bank to report, kicking-off the new earnings season. Wells Fargo, Morgan Stanley, Goldman Sachs, Citigroup and US Bancorp are all scheduled to report first quarter earnings before the opening bell on Thursday April 14.

You can read our earnings look ahead for the banking industry ahead of the results here.

US banks reported record revenue and bumper earnings in 2021 as they unlocked large provisions put aside during the tough times when the pandemic dominated the year before and investment arms reaped rewards from highly active markets.

But the outlook for 2022 is being bogged-down by a fresh array of threats. Just last week, JPMorgan CEO Jamie Dimon published his closely-watched annual letter to shareholders that warned the banking industry is ‘facing challenges at every turn’, from an uncertain economic outlook and rampant inflation to the global crisis that has erupted following Russia’s invasion of Ukraine.

Dimon provided the first glimpse into the cost of the Ukraine crisis within his letter, stating the bank is ‘not worried about our direct exposure to Russia’ while warning it is still expecting to lose ‘about $1 billion over time’. We may see the first impact of this start to filter through when the first quarter results are released.

Plus, the industry will face tough comparatives this year that will make it tougher to impress markets following the record numbers seen in 2021. For example, over $9 billion of the $48 billion in profits that JPMorgan booked last year came from one-off release of credit reserves and while we may see further unwinding of provisions in 2022, it will be nowhere near the level investors have become accustomed to over the past year or so.

On the brighter side for US banks, mounting inflation – which currently sits at a 40-year high at around 8% and is well above the 2% target set by the US Federal Reserve – should lead the central bank to hike interest rates on several occasions this year, which in turn should boost the profits that banks can make on the likes of loans and mortgages. The Fed raised rates for the first time since 2018 last month and that is expected to continue going forward, which will help offset lower credit releases and the normalisation of trading from its capital markets division.

Dimon has said that while he supported the Fed’s decision to undertake dramatic actions to protect the economy during the pandemic, the fiscal spending and QE was ‘probably too much and lasted too long’.

‘I do not envy the Fed for what it must do next: The stronger the recovery, the higher the rates that follow (I believe that this could be significantly higher than the markets expect) and the stronger the quantitative tightening,’ Dimon said in his shareholder letter.  He said the Fed needs to breakaway from the view that it needs to raise rates by 25 basis points at a time and at regular intervals, urging for the central bank to be more reactive to economic data and events in real time rather than following a pre-determined plan.

While US banks await higher interest rates, there is a big focus on how they keep a lid on costs and protect profitability in the meantime. Costs are currently growing at a much faster pace than income. With this in mind, analysts believe JPMorgan’s return on equity will plunge closer to 12.1% in the first quarter compared to the 16% delivered in the last three months of 2021. That would also be down markedly from the 23% ROE reported a year earlier. Return on tangible common equity (ROTCE) is expected to fall to 14.6% from 29% the year before.

That is being exacerbated by the fact costs are rising at a time when JPMorgan is also ramping-up investment on technology and an expansion into UK retail banking, with investment spending set to soar 30% in 2022 to around $15 billion. This is a bone of contention with some investors considering JPMorgan has said it may miss its medium-term 17% ROE target this year and possibly even next year as a result. There has been a suggestion that shareholders are unhappy with the lack of detail released about its spending plans, which may pressure the bank to unveil further information when it releases results this week. However, some believe investors may have to wait until the bank holds its investor day that is pencilled-in for May 23 to find out more.

Wall Street forecasts JPMorgan will report a 6.1% year-on-year decline in managed revenue in the first quarter to $31.1 billion and that EPS will plunge over 39% to $2.73 from $4.50 the year before.

Having climbed to new all-time highs in 2021 as it delivered record numbers, JPMorgan shares have been under pressure over the last three months and the stock has fallen 22% since mid-January.

We could see JPMorgan shares continue to fall toward the 14-month closing low of $128 amid the latest leg of the downtrend that started this month. That floor needs to hold in order to avoid opening the door to the $124 level of resistance seen in late 2020.

The RSI is firmly in bearish territory to suggest the stock could come under further pressure and this is supported by a mild uptick in volumes over the past five days compared to the 10-day average. We saw the 100-day sma sink below the 200-day sma a month ago and the 50-day sma continues to sink further south of both metrics.

On the upside, the 50-day sma, which currently sits at $142 and is in-line with the March-highs, has proven to be a ceiling during the last five months, with shares only managing to briefly move above the moving average. Having fallen significantly below this ceiling in April, we are likely to see it recover back toward this level once the current downtrend begins to reverse. This is the first upside target it needs to break above in order to install confidence of a move higher toward the 100-day sma at $151 and then the 200-day sma at $156, in-line with the February-high.

Brokers remain bullish on JPMorgan and the 29 brokers that cover the company currently have an average Buy rating and a target price of $167 – implying there is over 27% potential upside from the current share price over the next 12 months and that it can recover back toward the 2022-high. 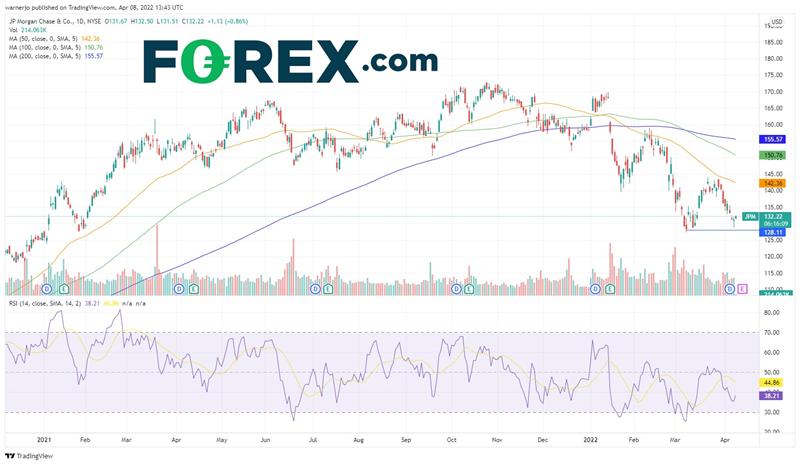 How to trade JPM Stock