Lloyds H1 earnings preview: where next for Lloyds shares?

Lloyds Banking Group is expected to reveal its new dividend plan when it releases results this week after the last of the restrictions on payouts were removed. We explain what to expect from the earnings and consider where Lloyds shares could be headed.

When will the Lloyds H1 earnings be released?

Lloyds Banking Group will release its interim results on the morning of Thursday July 29.

Lloyds H1 earnings preview: what to expect from the results

The primary focus will be on the bank’s plan for returning cash to shareholders this year, having said it is accruing dividends with the intention of resuming a ‘progressive and sustainable ordinary dividend policy’ later this year.

Investors will have high expectations considering the Bank of England removed the last of the guardrails limiting dividends that could be paid by UK banks during the pandemic earlier this month. That is a firm sign that the BoE is happy the sector has enough cash to weather whatever the pandemic has left to throw at the economy whilst giving them freedom to return as much cash as they wish. Lloyds paid the maximum amount it was allowed when it issued its final dividend for the last financial year.

Lloyds has said it intends to resume dividends ‘at a higher level than 2020’. The fact Lloyds has been building capital when those accruing dividends are excluded sets expectations even higher. Estimates from Bloomberg suggests Lloyds has £4 billion to £5 billion in excess capital.

That decision has been ultimately underpinned by an improving economic picture as vaccination programmes progress and lockdown eases, allowing Lloyds and other banks to boost profits by releasing reserves that have been put aside to cover any potential bad loans spawning from the coronavirus crisis. Lloyds released £459 million from its reserves in the first quarter, which translated to a net credit of £323 million. This figure will be closely-watched as it will go a long way in deciding the overall result for the period.

Investors will want to see Lloyds remain on track for the full year after the bank raised expectations back in April. It is targeting a net interest margin of at least 2.45%, for operating costs to drop to £7.5 billion, and for its statutory return on tangible equity to be between 8% and 10%.

The 24 brokers that cover Lloyds currently have an average Buy rating on the stock with a target price of 52.47p, implying there is up to 13.8% potential upside from the current Lloyds share price.

Lloyds stock price sold off as the UK headed into the pandemic in the winter of 2020. Price held near the lows, eventually touching 23.64 on September 24. However, as it became more apparent that Brexit was going to happen and as inflation expectations began to rise, so did the share price of Lloyds. Price traded in an orderly, upward sloping channel from early October 2020 until June 1, to a high of 50.56. Since then, price pulled back to test the bottom trendline of the channel and bounced. 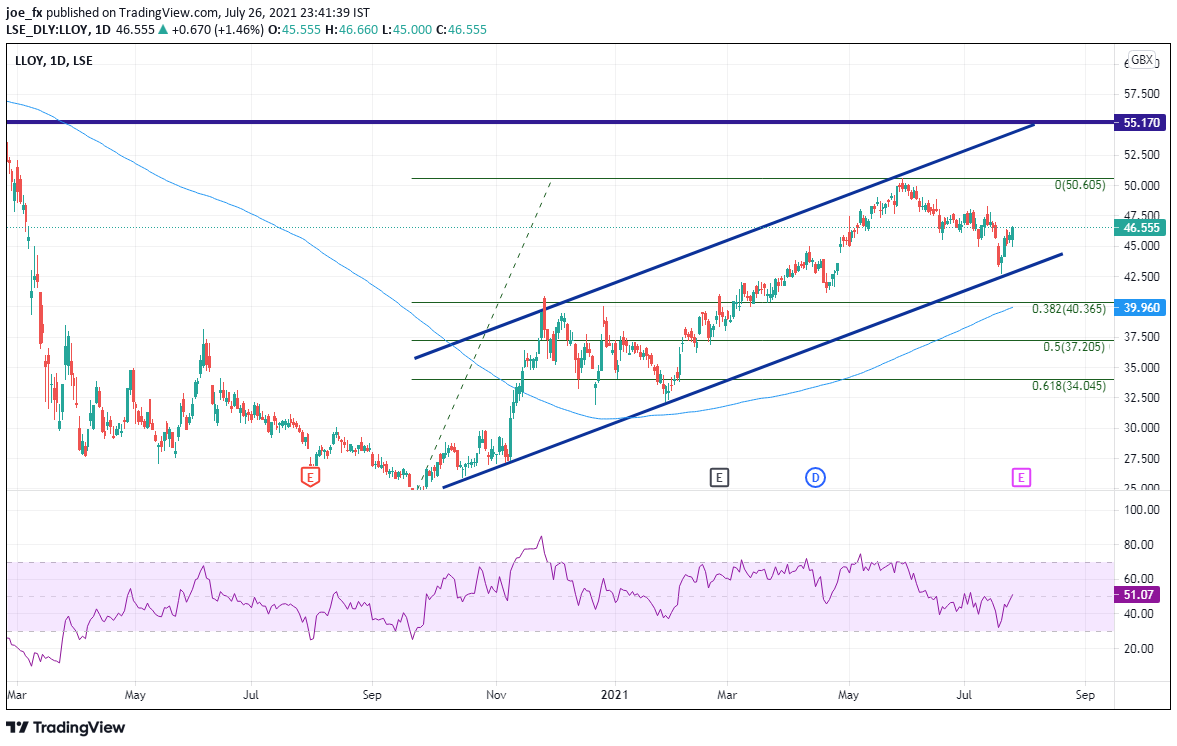 How to trade Lloyds shares