Netflix Q2 preview: Where next for Netflix stock?

Netflix is bleeding subscribers, but can a new cheaper, ad-supported version of its streaming service revive growth?

When will Netflix release Q2 earnings?

Netflix is scheduled to release second quarter earnings after US markets close on Tuesday July 19.

Wall Street forecasts revenue will rise 9.6% to just over $8.0 billion in the second quarter, with diluted EPS expected to fall 1.3% from last year to $2.93.

Netflix shocked the markets when it revealed subscriber numbers fell for the first time in over a decade earlier this year. It lost 200,000 subscribers in the first quarter and this trend is set to continue in the second after Netflix warned it expected to shed another 2 million. That warning sent shares into freefall earlier this year. With the stock down over 70% since the start of 2022, it has been the worst performer in the entire S&P 500 this year.

The withdrawal from Russia was the main driver of the decline in user numbers in the first quarter. In fact, subscribers would have grown in the period if it wasn’t for the loss of 700,000 subscribers in the country. However, the weak outlook for the second quarter shows that bigger headwinds are at play. Pandemic-induced demand is unwinding, increased competition is starting to take its toll, and price hikes are contributing to the loss of subscribers – all of which could be exacerbated as the cost-of-living crisis starts to stretch people’s budgets. Netflix is expected to keep growing revenue this quarter even if it is bleeding subscribers thanks to higher prices. On average, analysts believe the cost of the average annual subscription to Netflix cost an average of $220.76 in the quarter, around 6% higher than a year ago.

Netflix is forecast to shed 1.2 million subscribers in the US and Canada, around 759,000 in Europe, the Middle East and Africa (this also includes Russia) and another 625,000 in Latin America during the second quarter. Asia is the only region where Netflix is expected to continue growing subscribers, with 523,000 additions pencilled-in by analysts.

The outlook for the third quarter will be pivotal in deciding how markets react to the update. Wall Street currently believes the streaming giant can start growing subscribers once again in the third quarter of 2022, forecasting it can add around 2.2 million in the period. Analysts remain confident that the growth will continue in the fourth and believe Netflix will add around 7.2 million subscribers during 2022 as a whole.

The loss of subscribers in 2022 is placing pressure on Netflix to crackdown on account sharing, with up to 100 million households accessing Netflix by using somebody else’s account, as well as launching a cheaper, ad-supported version of its service in an effort to revive growth. While Netflix is also slowly exploring opportunities in the video game space, the company has a major job to do in convincing shareholders it can find new catalysts.

We already know that Netflix has partnered with Microsoft to help get its new ad-supported version up and running quickly given the tight timeframe it is working to. The company said Microsoft has ‘the proven ability to support all our advertising needs’ and will allow Netflix to scale-up the new service over time. The surprise partnership has been welcomed by markets and some analysts believe the opportunity could be bigger than anticipated, with Bloomberg Intelligence suggesting an ad-supported platform could add $3 billion in annual revenue in the US and Canada alone, or around $1.25 billion under a conservative scenario. However, analysts have warned it could take time to scale-up its ad business, but believe the opportunity overseas could be even greater and allow it to become a major player in the global advertising market.

Netflix has said it is trying to protect profitability and has vowed to keep its ‘minimum’ operating margin at around 19% to 20%. This came in at 25.1% in the first quarter and this is expected to drop to 21.5% in the second. Investors will want to see this goal reiterated this week as fears mount that Netflix may have to sacrifice profitability in order to revive growth. An ad-supported version, which some analysts believe will be launched before the fourth quarter, would weaken its margin. Netflix has also promised to remain cash generative even as the brakes are applied to growth and it budgets some $17 billion on content this year, although the need to invest in new ventures could also swallow up cash going forward. Markets currently believe Netflix can deliver free cashflow of around $700 million in 2022, which would mark an improvement from the $132 million outflow seen in 2021.

Netflix shares have lost almost three-quarters of their value since peaking at all-time highs last year. The stock is now in consolidation mode following the heavy selloff and the upcoming earnings could deliver a breakout.

The selloff was sharp and sent the stock to a five-year low of $162.70 back in May, but the stock has started to settle and has managed to remain above $170 over the past three weeks, making this the initial floor. If these two levels fail to hold then we could see Netflix unravel as low as $138, which was last hit back in April 2017. Below there, sub-$123 comes into view.

On the upside, the 50-day moving average, which currently sits at $185, has proven to be a firm ceiling for the stock since the selloff began. A sustained break above here would be significant and allow it to target $205 before eyeing the June-high of $207.40. The 47 brokers that cover Netflix believe there is a huge opportunity following the heavy selloff this year and see 65% potential upside from current levels with an average target price of $289.87. 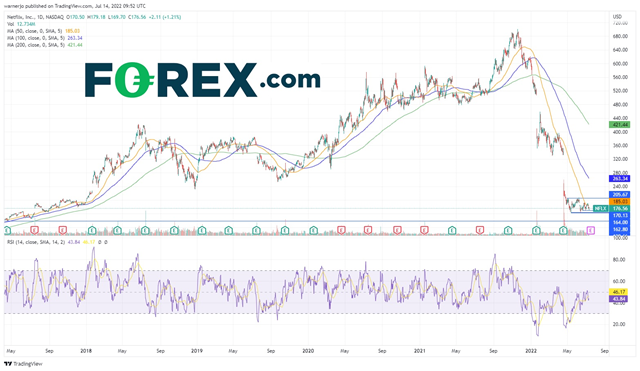