Tesco share price: where next ahead of its annual results?

Tesco shares will be in focus later this week when it releases its preliminary full-year results, with investors hoping the UK’s largest supermarket can continue to outperform its peers.

When will Tesco release its full-year results?

Tesco will release preliminary full-year results at 0700 BST on Wednesday April 14. This will cover the financial year that ran until late February 2021.

Tesco earnings consensus: what to expect

Tesco has performed strongly during the pandemic. With its stores having remained open and demand for online and click-and-collect services rising during the pandemic, Tesco reported a record Christmas and outperformed its peers with a ‘market-leading performance’.

However, whilst Tesco and other supermarkets have been among the few retailers allowed to stay open during lockdown, it has also led to a huge increase in costs. Supermarkets have had to ramp-up their lower-margin online operations and spend more on making their stores safe, hiring more staff and covering the cost of increased sickness and absences from existing ones. In January, Tesco warned it expected to incur £810 million in Covid-19 costs over the full-year, up from its previous estimate of £725 million.

Still, Tesco has said retail operating profit ‘is likely to be at least at the same level as in 2019/20’, which came in at £2.75 billion. However, that guidance excludes the £585 million worth of business rates relief that it is repaying to the Treasury.

A Reuters-compiled earnings consensus shows analysts are expecting lower revenue and profits across the board. Note that the adjusted operating figure below is typically reported by Tesco as operating profit before exceptional items and amortisation of acquired intagibles.

What is the outlook for Tesco as the economy reopens?

Tesco entered a new chapter last year when major changes were made to the board as fresh faces took over major roles and this will be the first set of full-year results to be presented by chief executive Ken Murphy, who took over at the helm last October.

His immediate job will be to convince shareholders that the supermarket remains well-placed as the economy starts returning to normal. It will have to adapt again as behaviour changes again. For example, people will be eating less at home now that restaurants and the hospitality industry reopens. However, Tesco boasts diversity and can capitalise through wholesaler Booker, which performed well during the Eat Out to Help scheme but has suffered since the hospitality industry was closed.

Operationally, Tesco and other supermarkets have made huge progress during the most disruptive year on record, challenged by the pandemic and Brexit. But investors want clarity on when financials will follow.

They will also want to know how dividends will fare going forward. Analysts are expecting the ordinary payout to fall year-on-year, although investors will take some comfort from the £5 billion that was returned via a special dividend in February, funded by the sale of its businesses in Thailand and Malaysia.

Also watch out for any news on Tesco Bank. The loss-making unit is likely to be sold-off in the future considering Tesco has already started separating the unit from its results and sold-off its mortgage book to Lloyds last year.

Tesco’s share price hit a yearly high of 260p before tumbling lower and finding a floor at 217p.

The price has been trending higher from 217 hit on March 5. It trades above its 6 week ascending trendline but failed to break through resistance at 236 the November high and December high 2020. The RSI is also supportive of further gains whilst it remains out of overbought territory. Although both the 50 & 100 EMA are flat suggesting that the longer term bias is neutral.

Immediate support can be seen at 230 which is the confluence of the ascending trend line and the 50 & 100 EMA. This could prove a tough nut to crack. A break below this level could see the sellers gain momentum towards 217 the yearly low. 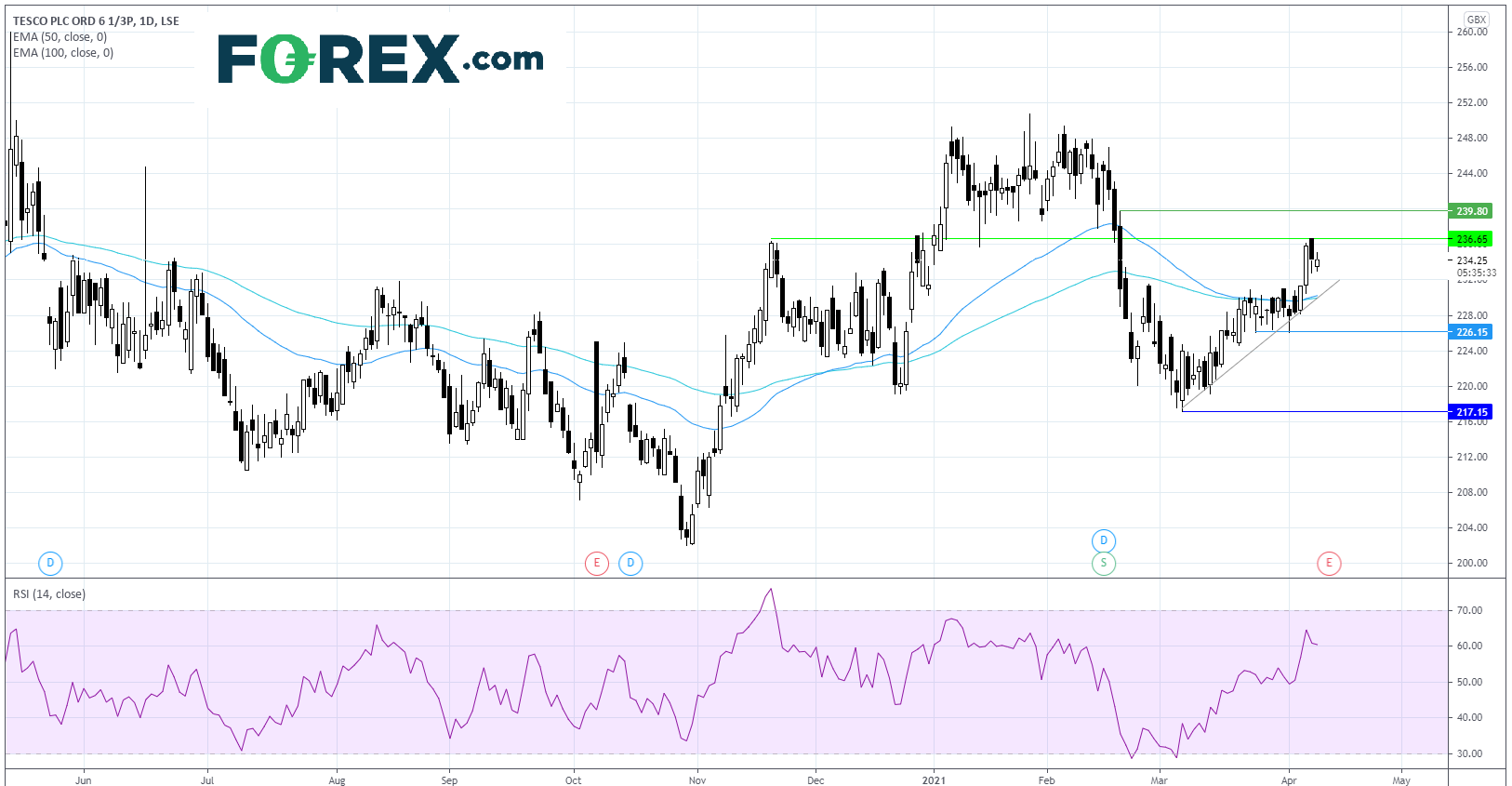 How to trade Tesco shares

You can trade Tesco shares with Forex.com using CFDs, with tight spreads from 1 pt on UK shares available.