Twitter is expected to have continued to grow its user base and revenue in the second quarter. We outline all the key figures to look out for and consider how the earnings could impact the Twitter share price.

Twitter will release second-quarter results after the markets close on Thursday July 22.

Growth in monetizable daily active users (mDAU) will be closely watched as always. Twitter reported 20% year-on-year growth in the first quarter and ended March with 199 million mDAU. A Bloomberg-compiled consensus shows analysts are expecting a 10% jump in mDAU in the second-quarter, driven by theories that the resumption of live events and sports has raised engagement with users.

Twitter has said revenue will be between $980.0 million and $1.08 billion in the second quarter and that it will book an operating loss of $120 million to $170 million. That would compare to the $683.4 million in revenue and $124 million loss reported in the second quarter of 2020. Analysts are expecting Twitter to hit the upper-end of that range with revenue of $1.06 billion, according to a Reuters-compiled consensus.

The weak numbers from the year before will flatter the second-quarter results. Still, it is anticipated that sales growth will be supported by a rise in ad-impression pricing during the quarter and the return in demand from businesses looking to advertise as the economy reopens.

Building on the company’s guidance, the consensus is expecting its net loss to narrow to $96.4 million from the $1.22 billion loss reported the year before, and for the diluted loss per share to follow by shrinking to $0.13 from $1.56.

Twitter is also expected to provide guidance for the third quarter that will be closely watched by investors. The current consensus, which can be used as a benchmark, anticipates Twitter will deliver revenue of $1.17 billion in the third quarter.

Twitter has not provided much in terms of full-year guidance and is likely to stick to providing it on a quarterly basis. Currently, it has only said that it expects revenue to grow faster than costs in 2021, that capex will be between $900 million and $950 million, and that stock-based compensation will amount to around $600 million.

Brokers currently have a Hold recommendation on Twitter with an average price target of $62.17, some 4.7% lower than the current share price.

The Nasdaq 100 (orange line) had been outpacing TWTR through the first 2 months of this year.  However, as the stock put in a high of 80.75 on February 25, that trend reversed, and the Nasdaq 100 began outpacing TWTR.  After price gapped lower on April 30th from 65.09 to 56.00, TWTR began forming a rising wedge pattern, and finally with the larger index once again. As TWTR neared the apex, it peaked on July 14 at 72.07 with a shooting star (bearish) and a divergent RSI (bearish).

That may have the final nail in the coffin, as price broke lower and traded below the bottom trendline of the rising wedge.  The target for the completion of a rising wedge is a 100% retracement of the pattern, which is near 49.12.  However, price must first break the Fibonacci retracement levels at 63.30, 60.60, and 57.89 before reaching that level!

Near term resistance is above at the bottom trendline of the rising wedge near 67.50 and then the July 14 highs of 72.07.  Notice the NASDAQ 100 turned lower as well.  Look to the NASDAQ 100 for additional clues as to where TWTR may be headed next. 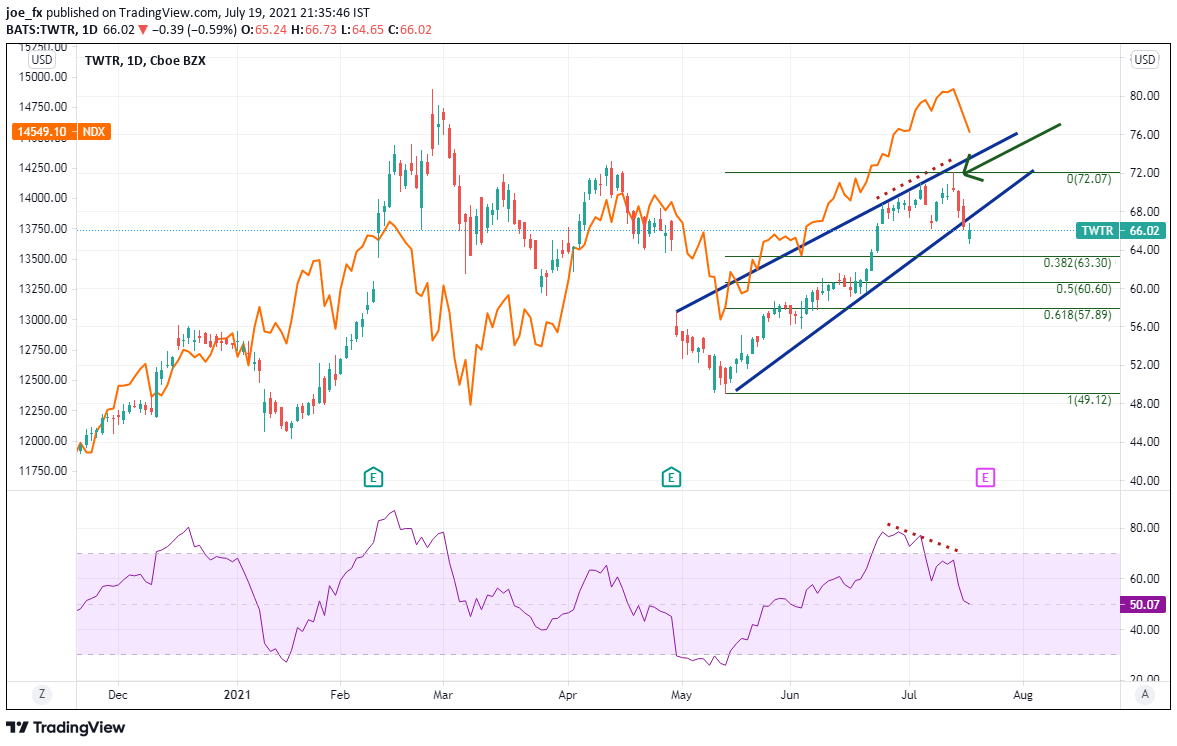 You can trade Twitter shares with Forex.com by following these four easy steps: