Why are US 10-year yields nearing all-time lows…and what does it mean?

<p>Nothing like a crazy day in the markets to get the old blood flowing again. In our research here, we typically focus on specific opportunities in the FX, commodity, and equity markets, but we would be remiss if we didn’t mention the massive move taking place in one of the world’s most important (and some would say “smartest”) market: bonds.</p>

Nothing like a crazy day in the markets to get the old blood flowing again. In our research here, we typically focus on specific opportunities in the FX, commodity, and equity markets, but we would be remiss if we didn’t mention the massive move taking place in one of the world’s most important (and some would say "smartest") market: bonds.

Despite all the talk in the media about preparing for a "rising interest rate enviroment," medium- and longer-term bond yields are actually at or approaching their lowest levels ever. Earlier this week, the 10-year JGB (Japanese government bond) went negative for the first time on record, and yields in Germany, another global safe haven, aren’t far behind at 0.19% as of writing.

Perhaps in that context, the current 10-year US Treasury bond yield of 1.64% looks reasonable, but that figure is also within striking distance of the all-time low of 1.53% set in July 2012. Indeed, that yield is down nearly 20bps already this week, so just one more day of global market panic could conceivably take the benchmark yield to all-time lows in the US as well.

So what does that mean for traders?

At the most basic level, a portion  of the decline can be chalked up to a decline in the "risk-neutral" yield component, which reflects expectations for the federal funds rate over the next decade. In other words, the decline in US bond yields confirms that traders think the Federal Reserve will be less likely to raise interest rates aggressively, mainly due to fading inflation expectations.

However, there is another component of the 10-year yield that has nothing to do with the Federal Reserve. The so-called "term premium," or the extra return that lenders demand to hold a longer-term bond instead of investing in a series of short-term securities. Locking up your money for a longer period of time is more inconvenient, so traders demand a higher return for doing so the vast majority of the time. In this case, the term premium also appears to be falling dramatically, presumably due to safe-haven demand.

Therefore, as long as global markets remain volatile, US treasury yields will likely remain subdued; conversely, US treasury yields may start to rise if the current bout of global liquidty subsides, even without traders anticipating a particularly rate hike schedule from the Federal Reserve. 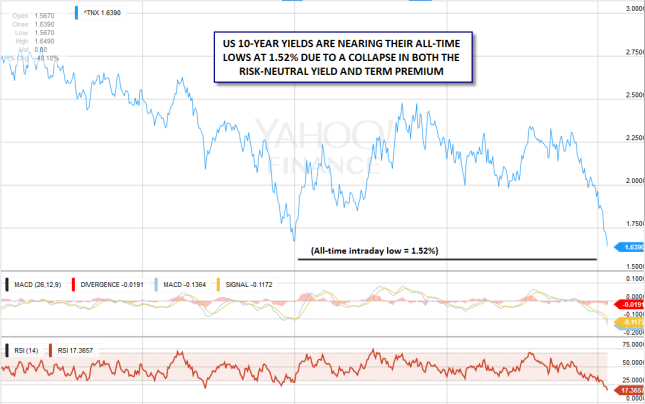