Will gains in Q2 indices continue throughout Q3?

During the beginning of Q3, equity indices could pick up where they ended Q2, which was moving higher

Since central banks began providing stimulus after the early days of the pandemic, stock indices have been on fire!  Equity Indices have continued posting gains throughout Q2, 2021, with most reaching all-time new highs.  Q2 gains in our most widely traded stock indices are as follows:

But with many central banks beginning to taper bond purchases (reducing stimulus) or discussing when they should begin tapering, stock indices may be nearing a top.  During Q3, July is typically a slow month as many traders take advantage of the warmer months to travel and go on holiday.  August could be “hit or miss”.  At times, August may have some volatility, especially near the Jackson Hole Symposium.  However, during other years, it could be dull, especially the week before the Labor Day holiday in the US. Volatility usually picks up in September, with traders returning to their desks and trying to get ahead of what they hope will be a big Q4 run.  There is also an important FOMC meeting this September traders will be waiting for.  Markets will be watching intently to see how committee members will adjust their outlook on growth, inflation, and interest rates.   Below are levels to watch for in our most widely traded indices:

The Dow Jones Industrial Average had been moving higher since the early days of monetary stimulus in March 2020.  The widely followed US stock index briefly traded above the top rising trendline of an ascending wedge and reached an all-time high of 35,091 on May 10th.  Price has pulled back into the ascending wedge, in what currently appears to be a corrective.  There is still room to put in new highs without going above the upper trendline of the rising wedge.  However, the DJI will first have to break above the corrective channel trendline at 34,500.  Above, resistance is at the top trendline of the wedge and the May 10th highs near 35,091. Above there, resistance is at the 127.2% Fibonacci extension from the June 7th highs to the June 18th lows near 35,301.  Support is at the June 18th lows near 33.271, then the bottom downward sloping trendline of the corrective channel near 32,890. Below, horizontal support crosses near 32,009. 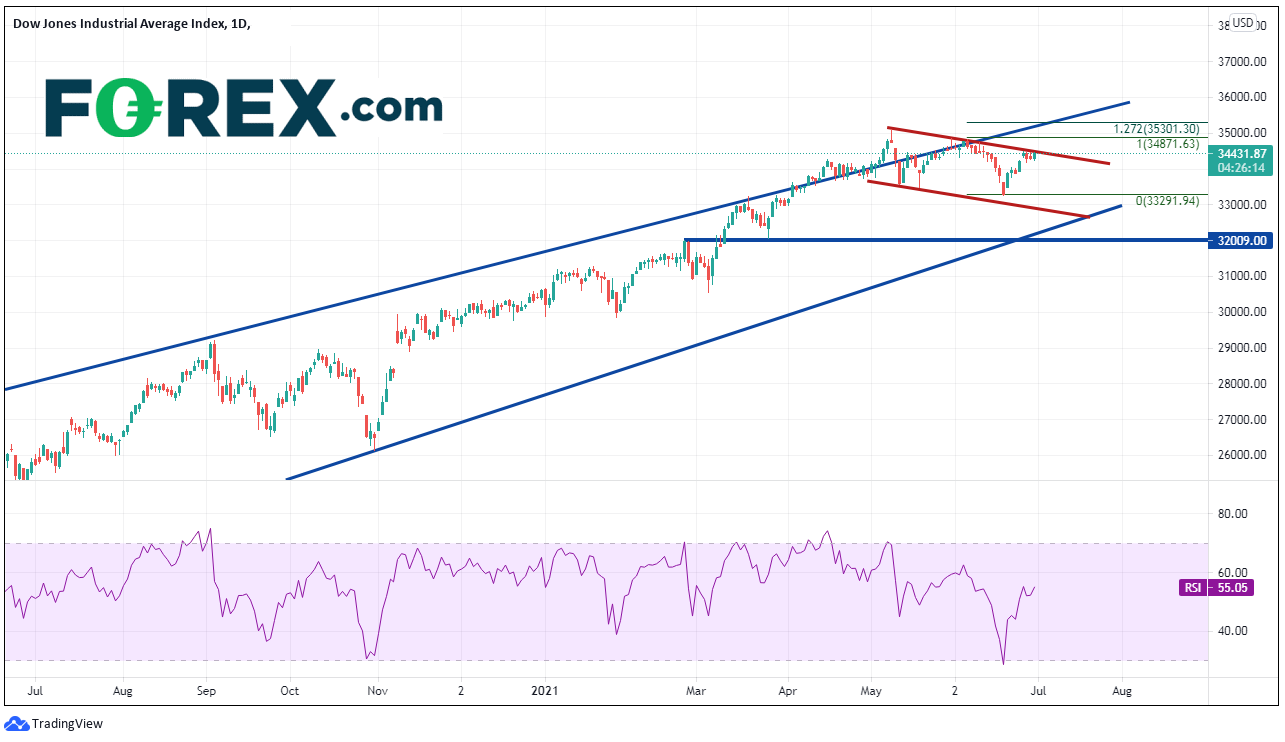 Your Guide to trading the Dow Jones Industrial Average

The Nasdaq 100 has also been moving higher since the pandemic lows in the spring of 2020.  The tech heavy index put in a high on February 16th near 13900.5, before correcting in an Inverse Head and Shoulders pattern.  After testing the neckline of the pattern several times over the next few months, the index finally reached the Inverse Head and Shoulders target during the last week of June near 14,400.  The index also put in all time new highs on the last day of Q2 at 14,598.50.  Resistance is at the 161.8% Fibonacci extension from the April 29th highs to the May 14th lows near 14,775 and then the upward sloping trendline of the September 3rd highs near 15,139. Notice how the RSI is in overbought territory and tuning lower, an indication that price may be ready to pull back.  First support is at the previous highs near 14,075, then horizontal support from previous resistance near 13,773 and 13,416. 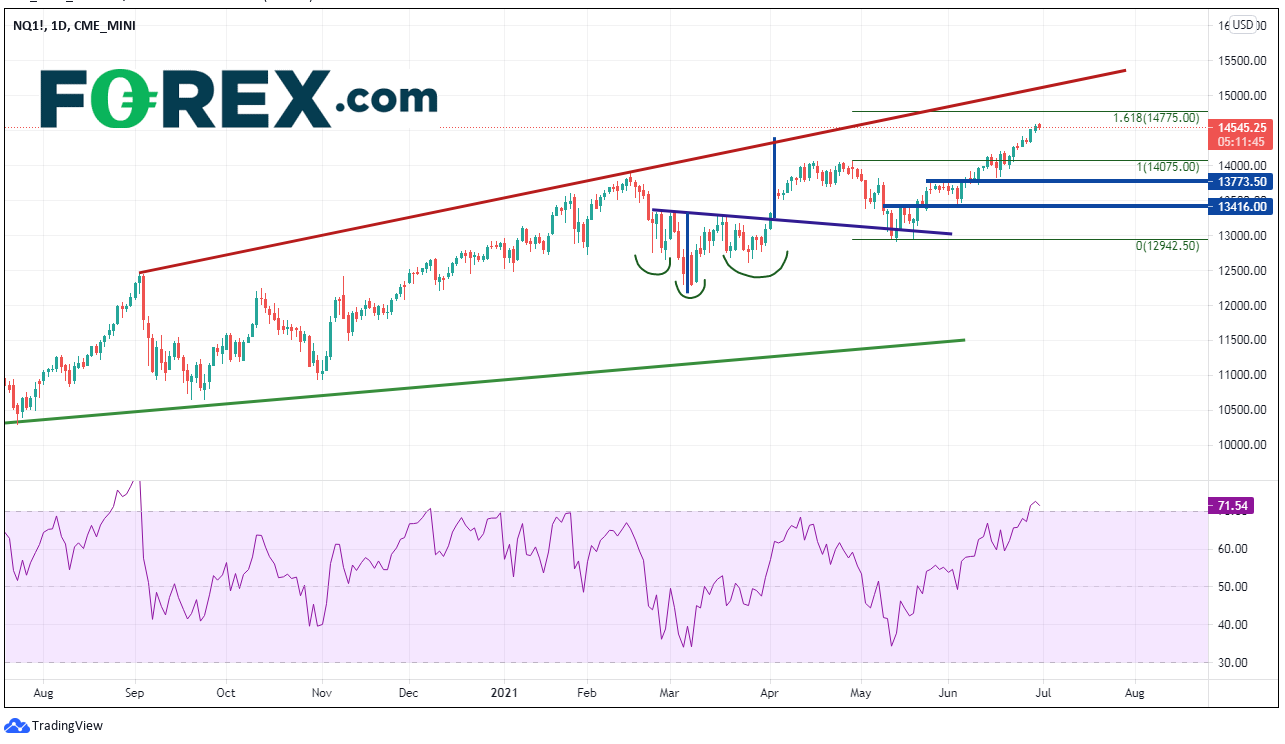 Your Guide to trading the NASDAQ 100

The German DAX has also been on the rise since the pandemic low, however, the market had a quick correction in October 2020 on its way to recent highs as price sold off from 13,184 to 11,645.  After recovering in early November 2020, the DAX continued higher in an orderly channel trend. Price briefly traded above the channel in early April only to move back into the channel after a few weeks.  Since then, the German index has been forming an ascending wedge within the channel.   The DAX put in all time highs on June 15th at 15,803, however has struggled since then to make new highs.  Resistance is at those recent all-time highs of 15,803, which confluences with the top, upward sloping trendline of the wedge.  Next resistance is at the top, upward sloping trendline of the channel near 16,075.  Support is at the bottom wedge trendline near 15,475, then the bottom channel trendline near 15,150.   The next support level is at the May 13th spike lows of 14797. 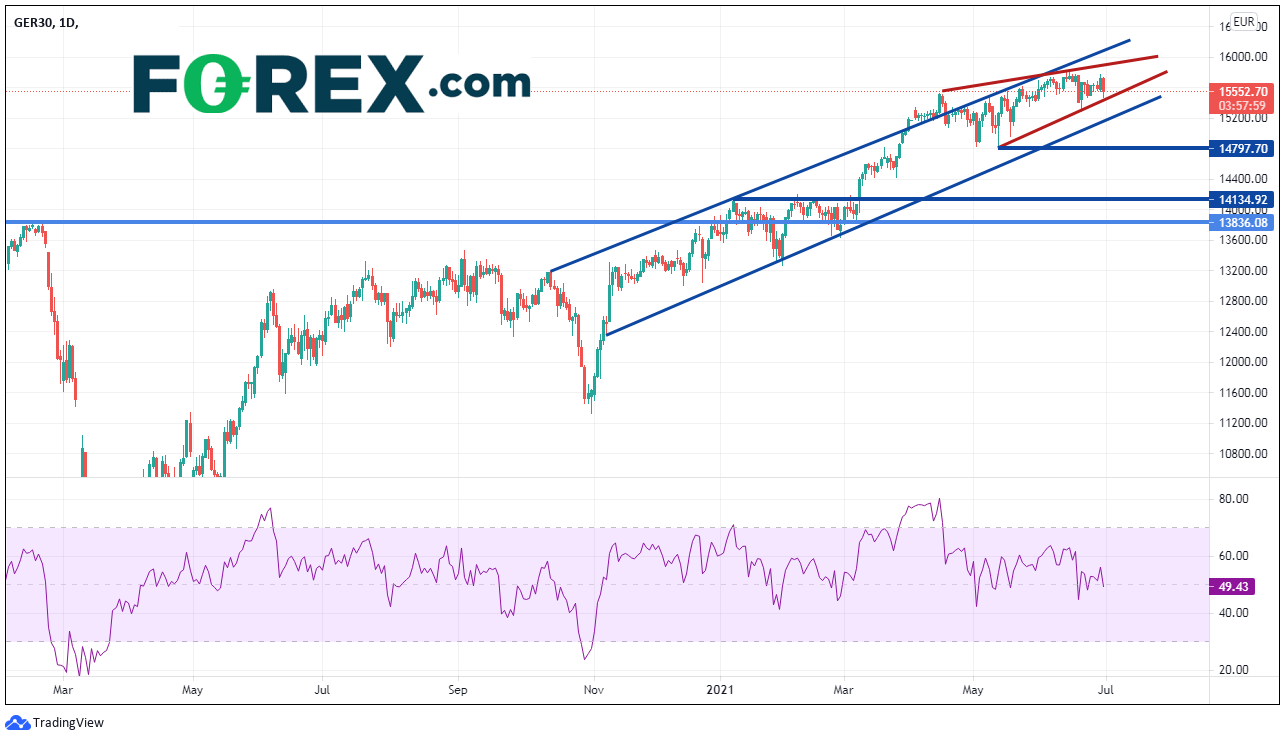 Your Guide to trading the DAX 30

Moving over to the UK, the FTSE 100 has led a similar path to its current level as the DAX.  After having a similar correction to the DAX in late October 2020, the FTSE 100 bounced and formed new highs on January 7th. After pulling back, the index continued to trade higher to current levels in a ascending wedge formation.  All-time highs were formed on June 16th at 7,215.7.  Price is approaching the apex of the wedge.  The target for the breakdown of an ascending wedge is a 100% retracement, or near 6,315.  Resistance is at the recent highs and the upper trendline of the wedge.  The next resistance level is the 161.8% Fibonacci extension from the January 7th highs to the February 1st lows near 7,418.2 There is a band of support below at the Fibonacci retracement levels from February 1st to June 16th, between 6,645 and 6,859.  Below, support is at the February 1st lows near 6.298. 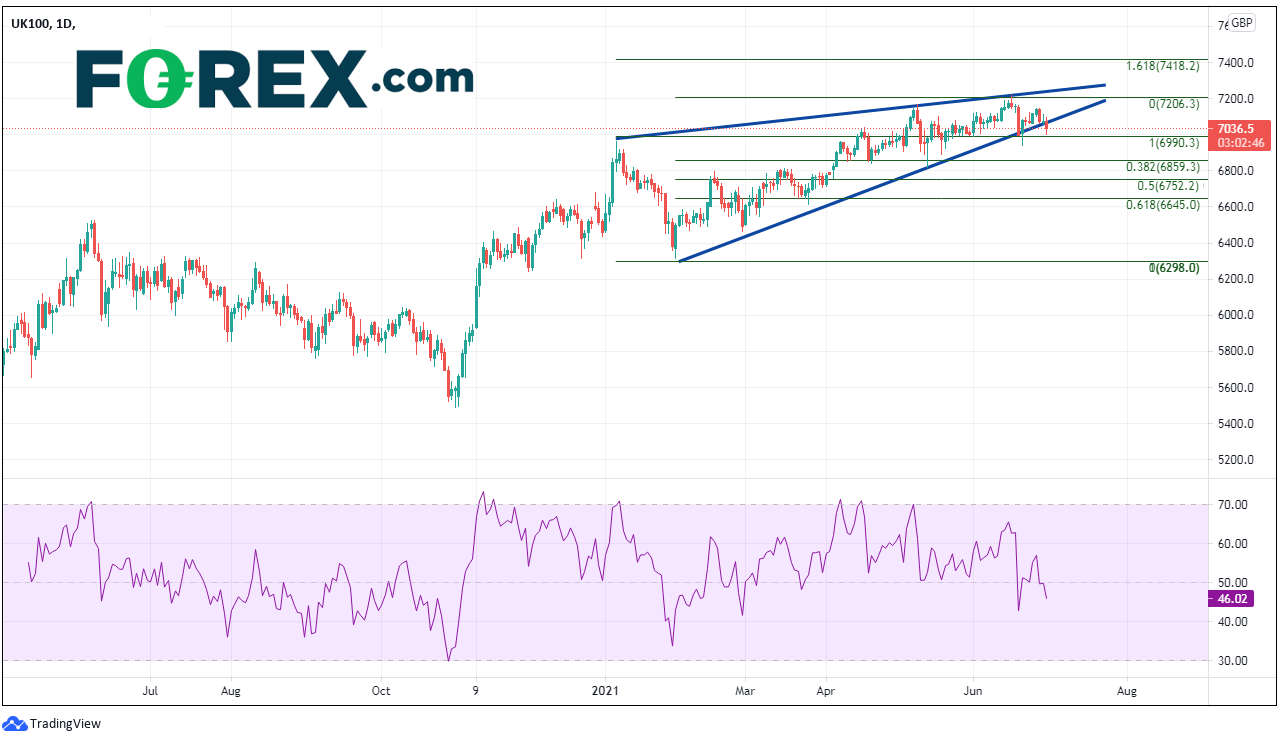 Your Guide to trading the FTSE 100 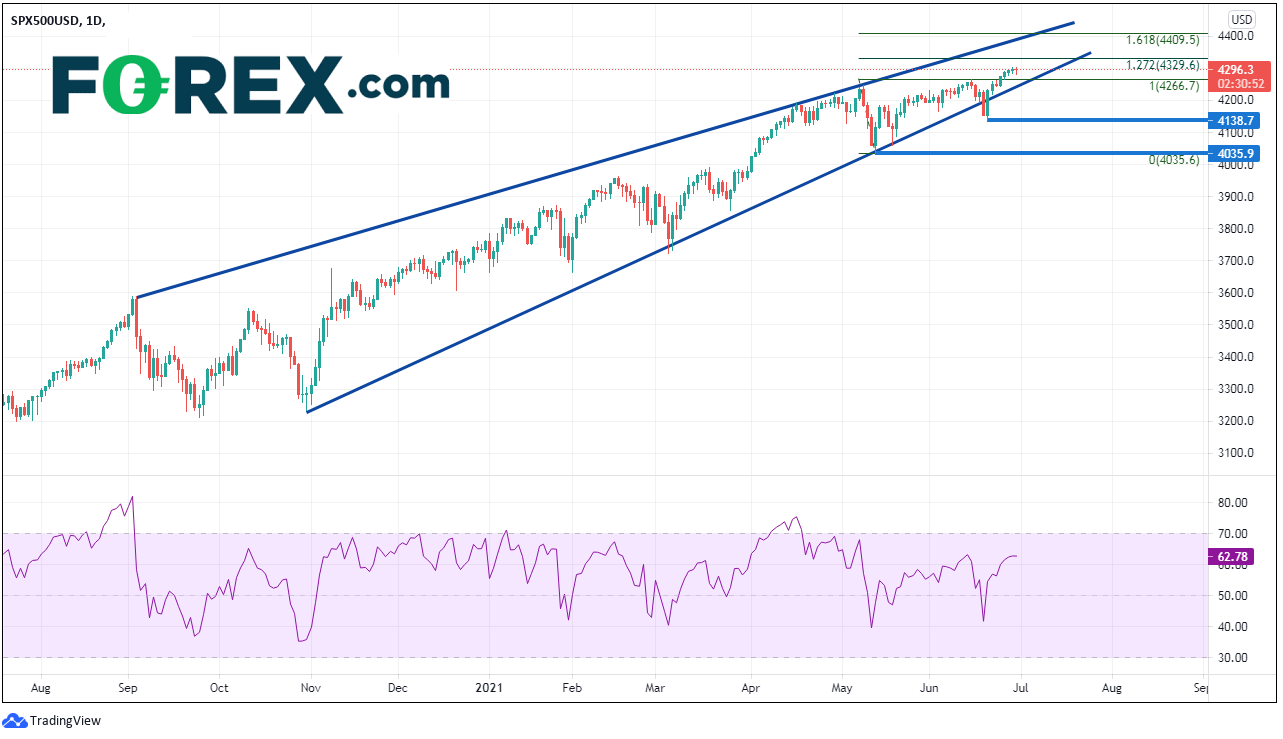 One item not mentioned that may come into play is a resurgence of the coronavirus, this time the Delta variant.  It’s too early to tell how this  may affect the markets, however localized lockdowns and restrictions seem feasible if the virus spreads.  This may affect monetary policy and in turn, affect global equity indices.  Be alert to virus and vaccine headlines throughout the summer.

During the beginning of Q3, equity indices should pick up where they ended Q2, which is moving higher.  However, as central banks continue to taper or talk about tapering, markets may begin to roll over.  For most central banks, this seems likely toward the end of August or sometime in September (except for the BOE who have already  begun tapering).  Central banks are keen on jobs and inflation data and will focus on these in determining monetary policy.