Traders who have been selling the pound either in the hope or expectations of a British exit from the EU had probably enjoyed a good run of form in recent times. But the latecomers who sold the GBP/USD near major long-term support level of 1.40 were playing with fire, and when you play with fire you sometimes get burned. And unfortunately that’s probably what happened to some of these participants when the markets opened overnight with a huge gap in response to the latest opinion polls on the issue of Brexit, which showed that the two camps were running neck and neck at 44% each as Remain gained ground over Leave. The overnight gap then ballooned as some more of these bearish speculators were probably forced to exit their positions and the bulls entered the fray. Consequently, the GBP/USD has enjoyed its best one-day performance since December 2008.

The latest gyration in opinion surveys is also reflected in our own FOREX.com twitter poll we conducted on Thursday of last week, when the tragic killing of a British MP triggered the suspension of the campaigns, leading to speculation that the Leave camp will now lose support – which is exactly what has apparently happened. Of the 535 respondents, 50% think that the UK public will now vote in favour of Remain and only 42% think they will still vote for Leave. The remaining 8% is not sure. 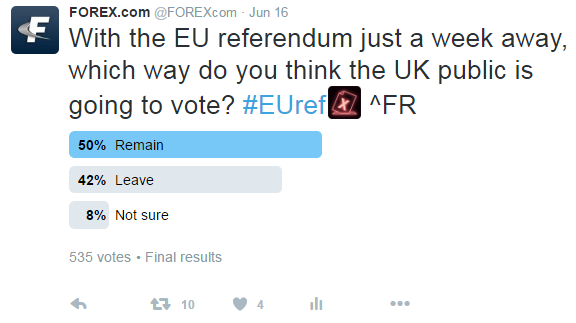 But as one of our followers correctly point out, this was a survey about how people thought the UK public may vote, not necessary how they will vote. So the results may be a reflection of the current positive sentiment. Needless to say, we do need to wait for the outcome of some of the actual votes that will be released in the early hours of Friday before one can be more certain about the final outcome. As such, opinions and therefore votes could still change, especially given the fact that the Leave and Remain groups have resumed their campaigns now.

How will the pound react post the Brexit vote?

While the initial reaction of the GBP may well be how you would expect it to be, traders may recall that in the aftermath of the Scottish referendum, in September 2014, the pound initially jumped against the dollar when Scots voted against leaving the UK, before the bear trend resumed. 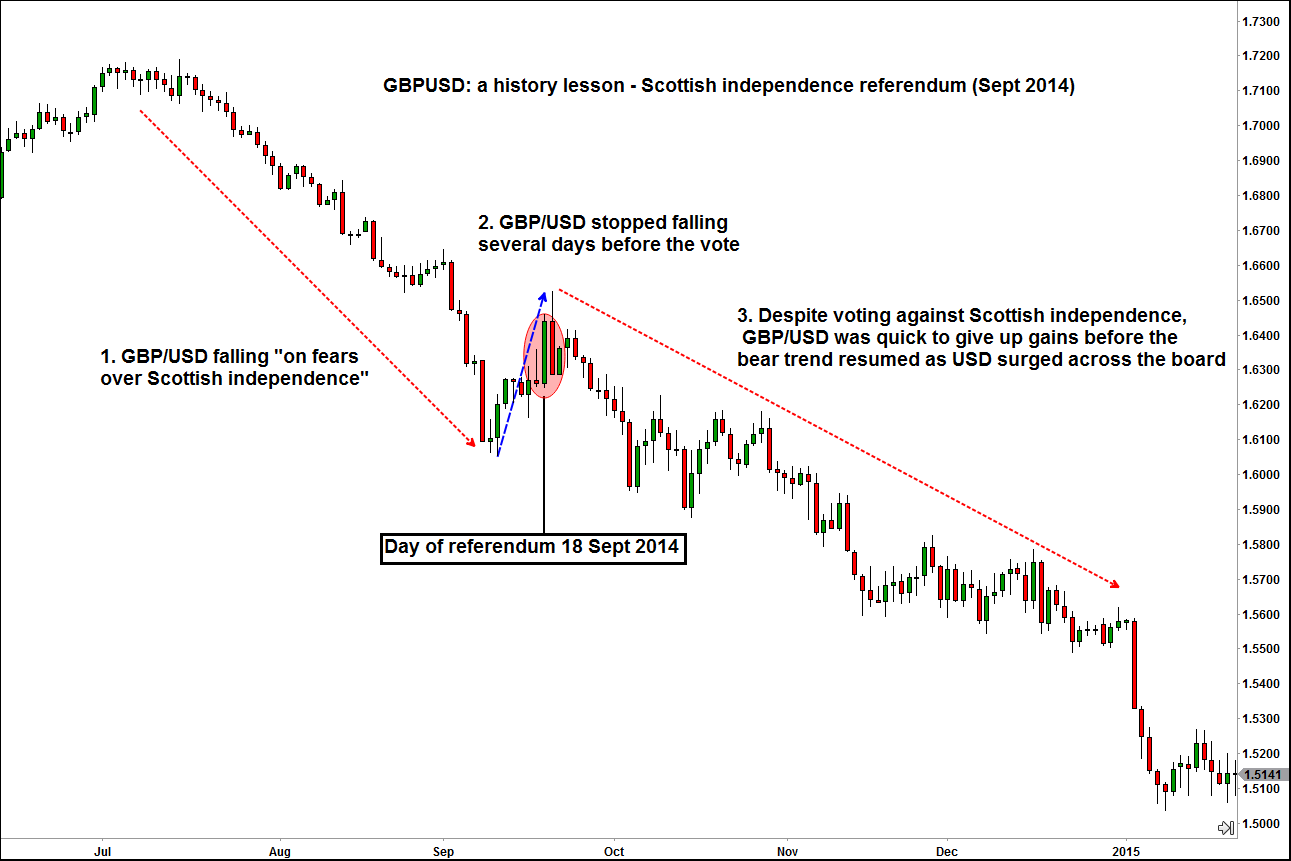 Clearly, the burst of bullish momentum means the pound may be overbought in the short-term, but that doesn’t necessarily mean it cannot go further higher. Actually, the GBP/USD’s short-term price action will be very important because, as the weekly chart shows, below, one can see that the cable is banging against a major resistance area in the 1.4660-1.4770 area. Here, the prior highs converge with a bearish trend line that has been in place since July 2014. With the EU referendum still posing a major risk event for the markets, the GBP/USD may be unable to break through this region with ease or until at least the outcome of the vote is released. If it does break through here however, it could trigger a new wave of momentum buying frenzy. However traders will also want to look for signs of failure to hold above this region of resistance, as this outcome could potentially lead to another big move – this time to the downside.

But will it be different this time? If GBP/USD is able to break and then hold above the 1.4660-1.4770 resistance region by early next week then we may see a more constructive, long-lasting, bullish performance from the Cable than we did in the aftermath of the Scottish independence vote. However, for the GBP/USD’s long-term bearish trend to end once and for all, there will need to be a marked improvement in UK data to encourage the Bank of England’s monetary policy committee (MPC) to end its current dovish stance.

In short, you will see a lot of volatility in the coming days, but ultimately I am not sure if the GBP/USD will be able to sustain the potential gains it may make post the referendum, assuming the vote will be in favour of remain. Needless to say, if the UK public votes in favour of leave then we could see a significant drop in the GBP/USD and other GBP pairs. 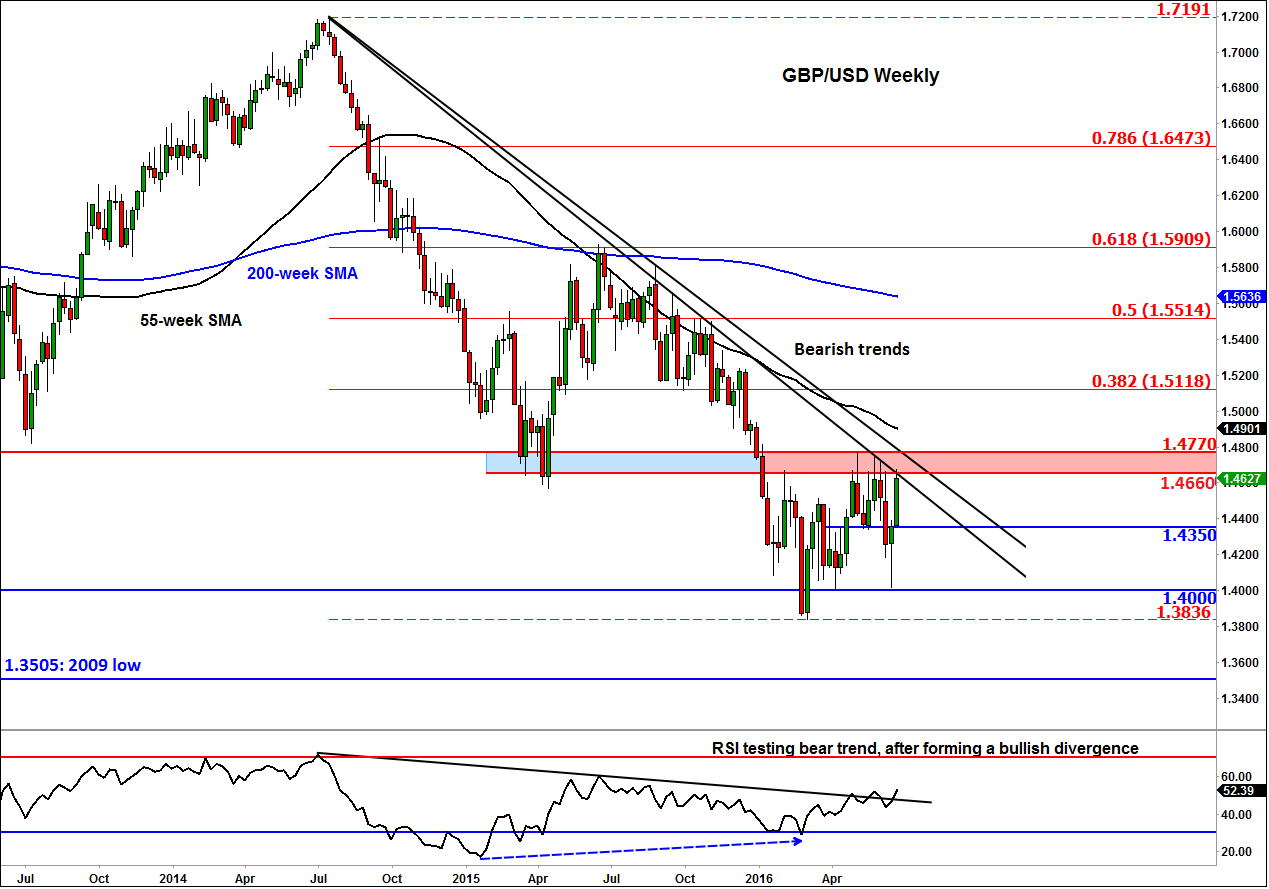