AUD/USD: Will hawkish Yellen finally knock down the Aussie?

What doesn’t kill you makes you stronger: US stocks hit new record high levels despite the Fed Chair Janet Yellen sounding rather hawkish in her testimony to the Senate Banking Committee today. As you would expect, the dollar strengthened across the board.

What doesn’t kill you makes you stronger: US stocks hit new record high levels despite the Fed Chair Janet Yellen sounding rather hawkish in her testimony to the Senate Banking Committee today. As you would expect, the dollar strengthened across the board. The USD/JPY jumped well north of 114.00 while EUR/USD slumped below 1.06 and buck-denominated gold and copper both turned negative. However, the GBP/USD, which was already lower because of the slightly weaker-than-expected UK inflation figures, didn’t move much further lower, though it was trading near the day’s low at the time of this writing.

Yellen said that waiting too long to remove accommodation would be “unwise” because the FOMC may be forced to eventually tighten monetary policy more rapidly, which could risk disrupt financial markets and push the economy into recession. She added that the FOMC will continue to hike rates as long as the economy “continues to show signs of strengthening” and that all meetings are live. Her comments suggests that the Fed will hike interest rates more frequently than expected – perhaps three times this year rather two that was previously expected.

The latest US consumer price inflation and retail sales data will be released tomorrow. If these figures show “signs of strengthening” then this will further boost the prospects of an earlier-than-expected rate hike and potentially cause the dollar to rise further.

AUD/USD could be the next domino to fall

Up until now, the Aussie has been very resilient against the US dollar. Yellen’s comments caused it to turn lower on the day. As a result, it has once again failed to break through the lower end of 0.7690-0.7745 resistance range where it had struggled previously as well. However so far, it hasn’t reached the key 0.7600/10 support area. While above here, the bias remains bullish. But if and when this level breaks we could then see the unwinding of the long positions that have been accumulated since the end of last year when the Aussie started to ascend.  As a result, the AUD/USD could fall back to the next support around the 0.7500/20 area before deciding on its next move, which could very well be to the downside. 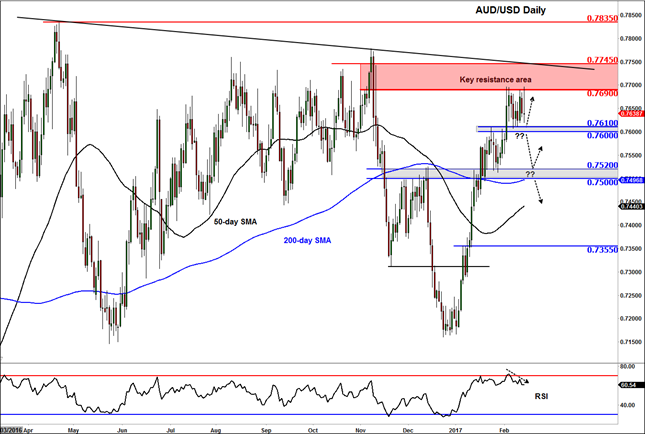