It looks like a July rate hike is firmly on the table and negative rates will soon become a thing of the past.

Eurozone CPI was revised a tad lower this morning but that isn’t going to change anything as inflation at 7.4% is still a record high. We have been hearing a lot of hawkish remarks from various officials at the European Central Bank of late and that is only likely to increase. So, are we going to see the EUR/USD form a base around 1.05 and head higher, instead of dropping to parity?

Olli Rehn, a former dove, was the latest to provide some hawkish remarks this morning, saying it was necessary for rates to move relatively quickly out of negative territory. Rehn said the need to continue gradual process of monetary policy normalisation is partly because uncertainty related to future price developments has increased, effectively admitting, like his peers, that their forecasts have been wrong. Rehn has already provided some hawkish remarks earlier this month, so this is nothing new.

Pablo Hernandez de Cos, another ECB policymaker, echoed Olli Rehn, in calling for a gradual withdrawal of stimulus, which is “adequate” in the current context. He added that further rate increases could be made in the coming quarters.

So, it looks like a July rate hike is firmly on the table and negative rates will soon become a thing of the past. The only problem is that the economy is going through a testing period and the ECB will have to be very careful in trying to balance the risks to growth from slightly tighter monetary policy conditions. But the battle against inflation is a real one, and they simply can’t allow price pressures to rise further or stay elevated for a long period of time.

On Monday, the single currency got a boost after Governing Council member Klaas Knot said that the ECB should raise interest rates in July by 25bps, but that a 50bps hike should not be excluded if data suggests inflation is rising. While I don’t think we will see a 50bp hike, Knot’s comments shows the ECB are determined to start its battle against inflation. The markets seem to agree by pricing in about 105 bps worth of ECB hikes by the end of 2022. 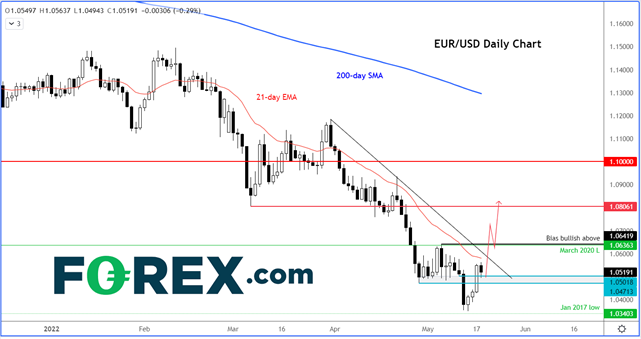 Thanks to the ECB’s hawkish messages of late, the EUR/USD has broken back above the 1.0470 to 1.0500 old support regain. The rounded retest of this area from underneath should have offered some resistance on Monday. However, it didn’t. This begs the question, are the bears the trapped group of speculators? If so, we may see a run towards the most recent high above 1.0640 where I would imagine buy stops are undoubtedly resting. Incidentally, a move north of the 1.0640 would also lift rates above the March 2020 low, and thus create a potential longer term low.

However, if rates come back down and break the abovementioned support zone below 1.0470, then all bets are off again. This would be bearish and as such a drop to the January 2017 low at 1.0340 would then not surprise me.