WTI jumps despite sharp build in US crude stocks

There is no end in sight for the on-going wild price swings in the oil market. At one stage yesterday, both oil contracts were trading below $30 a barrel with losses of about 3% each. Brent and WTI then surged higher to trade above $32 before easing off slightly and eventually closed around 4% in the black.  Speculation was rife yesterday that Russia and Saudi Arabia were willing to cut production in order to reduce the current supply surplus. But no official comments were made and traders were apparently quick to reduce their speculative positions that they had opened earlier in the day, putting renewed downward pressure on oil. Then prices skidded about $1 in the space of a few minutes last night after the American Petroleum Institute (API) delivered a reality check. According to the API, US oil inventories surged by 11.4 million barrels last week, which was some distance more than expected and the biggest weekly build since May 1996.

This morning oil prices managed to recover their poise in a quiet trade, though they fell back a tad 30 minutes ahead of the official US oil inventories report from the Energy Information Administration (EIA). The official analyst expectations were for a smaller build of 3.8 million barrels following the 4-million-increase in the week prior. But given the API’s estimate for a huge build, 3.8 million would have been a decent result for the bulls. As it turned out however, the EIA reported that crude stocks actually rose by 8.4 million barrels in the week ending January 22. There was some good news in that stocks at Cushing fell for the first time in 11 weeks, if only by 0.77 million barrels, while distillates dropped by a good 4.1 million barrels.

As the official build in crude oil stocks was slightly less than the API's estimate, WTI turned higher and was trading near the day’s high as we went to press. Nevertheless 8.4 million is a huge build and so it could weigh on oil prices later on in the day. From a technical point of view, not much has changed at this stage. Yes, prices have bounced from sub $30 in a very bullish manner but so far none of the major resistances have broken down. The bearish trends are still in place and for that reason and until proven otherwise, the bears are in control. The immediate resistances to watch are at $32.40 and $34.50/35.00, levels which were previously support/resistance. Meanwhile a decisive closing break back below $30 is probably what the sellers are waiting for. If this happens, we could see further oil price declines, perhaps towards the next psychologically-important $25 handle. 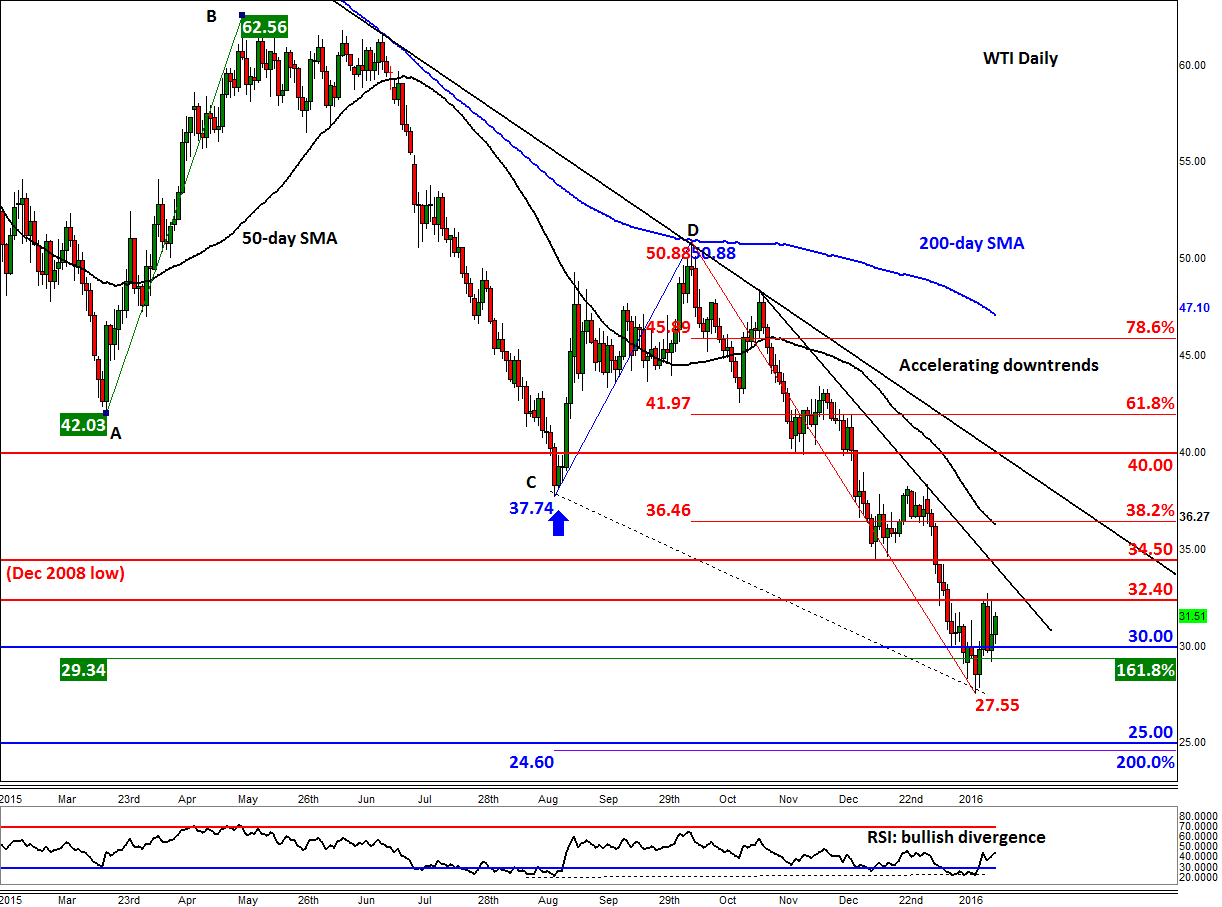