WTI oil halts drop ahead of US crude inventories

Crude prices were a touch firmer on the day when this report was being written. Both oil contracts have fallen sharply since peaking last week, when Brent hit its highest level since July 2015 of almost $59.50 and WTI rallied to its best level since mid-April of this year.

Crude prices were a touch firmer on the day when this report was being written. Both oil contracts have fallen sharply since peaking last week, when Brent hit its highest level since July 2015 of almost $59.50 and WTI rallied to its best level since mid-April of this year. Since hitting that high on Tuesday, Brent has fallen six days in a row, while WTI’s downward move, which started two days later, has also been eye-catching. Excessive bullish speculation in Brent has been the reason for its sharp drop, for according to the ICE positioning data net long positions in the London based oil contract in the week to 26 September had risen by a good 37,000 to a new record high of 523,000. As Brent has fallen back since the last snapshot of positioning data, this is likely to show up in next week’s ICE data as a reduction in net long positions due to profit-taking. But where do we go from here? Well, the API reported a surprisingly sharp weekly reduction of 4.1 million barrels in US crude oil inventories last night. But this was overshadowed by the big increases in stocks of crude at Cushing and those of gasoline, which jumped by 4.9 million barrels last week.  The official data by the EIA will be released later on today. Any significant deviations from expectations in the data may lead to a spike in oil price volatility, although investors are wary of the short-term inconsistency in the data due to the impact of the recent storms in the US. Generally speaking and despite the recent weakness, oil prices remain supported by ongoing supply restrictions from the OPEC and Russia, with the agreement likely to be extended in the event OECD crude oil stocks do not fall as expected. Any weakness in oil prices are thus likely to be short-lived, in my opinion.

WTI oil has been trending lower after a breakout attempt last Thursday above the previous high and the 78.6% Fibonacci retracement level failed to materialise. Consequently, oil prices fell back as resting liquidity below the market i.e. buyers’ stop loss orders were tripped, which exacerbated the drop. Still, at this stage it is not clear if this is merely a short-term pullback or the start of something more significant. After all, WTI is still holding above both its 50- and 200-day moving averages, which objectively tells us as that the trend is not bearish yet. Indeed, it has been making a series of higher highs and higher lows ever since it bottomed out in June, around the $42 mark. But given the recent false breakout attempt, we do need to see a clear signal that the bullish trend has resumed now. So far, we haven’t seen any signs of that. Quite the contrary, in fact, as key short-term support levels have broken down. Indeed, WTI was struggling to cling onto the $50 support level at the time of this writing. A potential clean break below $50 could pave the way towards the 200-day average at $49.50 or even lower. Meanwhile from a bullish perspective, we now need to see a break above $51.70 or the emergence of some other bullish reversal patterns at lower prices. Short-term resistance comes in at $51.25. 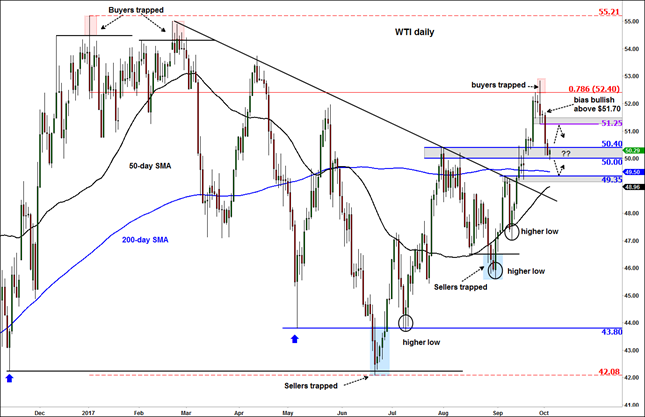