Yields up, stocks down while gold bides time ahead of NFP

The big theme at the moment is rising bond yields as key central banks attempt to move away from the era of extraordinary-loose monetary policy and zero interest rates.

The big theme at the moment is rising bond yields as key central banks attempt to move away from the era of extraordinary-loose monetary policy and zero interest rates. This is due mainly to rising levels of inflation, higher rates of employment and steady growth across many developed economies. Admittedly, economic growth is nowhere near full throttle at the moment. But the likes of the US Federal Reserve, Bank of Canada, Bank of England and now the European Central Bank don't want to overbook inflation. They know full well the dangers of moving too late as that could choke economic growth. So, central banks are taking baby steps in trying to normalise monetary policy, or at least prepare the markets for that eventuality. Their actions have side effects, not just on the real economy but the financial markets, too. As expectations rise over tighter monetary conditions in the future, government bond prices are falling as investors demand higher yields. The resulting higher yields – or expectations thereof – make non-financial equity prices progressively less attractive. Although equities carry higher yields than debt, they come with greater risk and the significant price increases ever since the financial crisis means many sectors are extremely overvalued. So, there is heightened risk we may see a major correction in the stock markets if bond yields continue to rise as central banks turn more hawkish.

Indeed, German bond yields have risen sharply in recent days, which has supported the EUR/USD. This has been in response to hints from the European Central Bank about a possible end to its ultra-loose monetary policy. Last week the ECB’s President, Mario Draghi, said that the threat of deflation had receded. Minutes of that meeting released yesterday showed the ECB’s governing council discussed whether it was appropriate to remove the promise to step up asset purchases if needed to stimulate the Eurozone economy. At the end, they decided against it, but instead ended a promise to cut interest rates further if needed.

The prospects of a stock market correction may boost the appetite for safe haven precious metals and possibly crypto currencies, though at the same time the noninterest-bearing assets may be undermined by rising government bond yields. For that reason, gold and silver remain largely out of favour for the time being. Indeed, silver's sharp flash crash overnight may be a tell-tale sign of what may be in store for the other precious metal, gold. However, if the dollar were to sharply extend its declines – and there is a good chance it may do that should today's US jobs report turn out to be significantly weaker than expected – then gold may actually make a dramatic comeback. The potential rebound could be fuelled further by a corresponding sell-off in the equity markets which could raise safe haven demand. So, while sentiment in gold and silver may be downbeat at the moment, things could change very quickly. But let’s wait for that to happen, rather than try to pre-empt it. 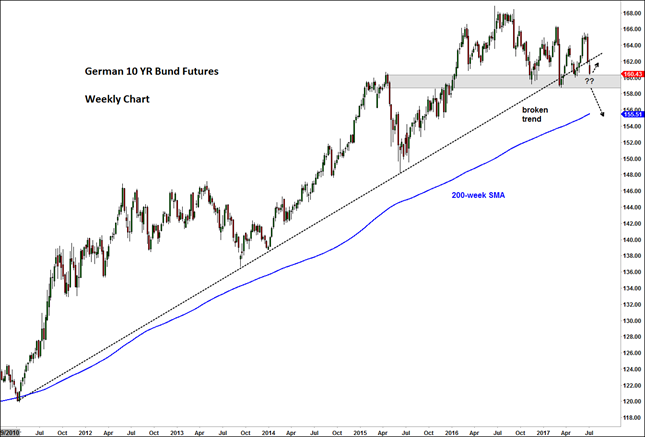