US consumer confidence dipped slightly to 117.2 from 121.7, meaning that whilst momentum is waning confidence remains near its highest level in 14-months. However, this is below expectations of a rise to 119.2, so there is some disappointment in the numbers. And it was a drop in expectations and inflation fears which weighed on the headline ‘current’ index, whilst rising house prices also appear to be a concern. Home prices have risen 13.3% YoY (11.9% expected) and 1.6% MoM (1.2%) expected according to the CaseShiller house price index. New home sales also fell to 0.87 million in April, down from 1 million in March.

The S&P 500 fell slightly by -0.21%, with 372 stocks declining (73.6%) and 132 advancing (26.4%). Seven of the 11 sectors closed lower, led by the energy, utilities and financials sectors. Real estate, consumer cyclicals and technology sectors were the only ones to close higher.

European reverse at of record highs

The Euro STOXX 600 briefly hit a record high before closing back near the open, closing effectively flat at 445.07 (0.03%). The DAX failed to hold onto early gain when it gapped to a record high then closing just 0.18% high, back beneath the prior record high of 15,538.

The ASX 200 closed to its highest level in two weeks following yesterday’s 1% rally and closed at the high of the session above 7100. 10 out of its 11 sectors close higher, led by Real Estate (1.4%), Telecommunication Services (1.4%) and Consumer Discretionary (1.3%).

Now trading less than 100-points from its all-time, the ASX 200 is on track to close higher for its eight consecutive months – which is quite an achievement considering it has closed lower in May 70% of the time over the previous 30 years. Still, futures are pointing to a soft a lower open so levels of support bulls to defend are 7083 and 7045. Its next major resistance level is the May high at 7172. 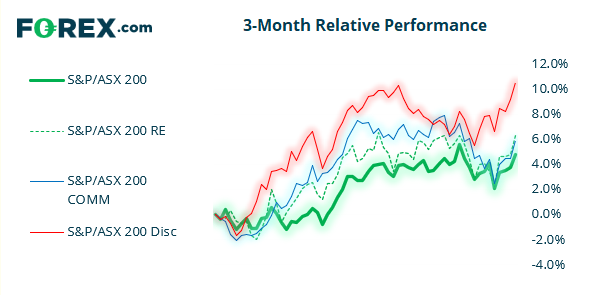 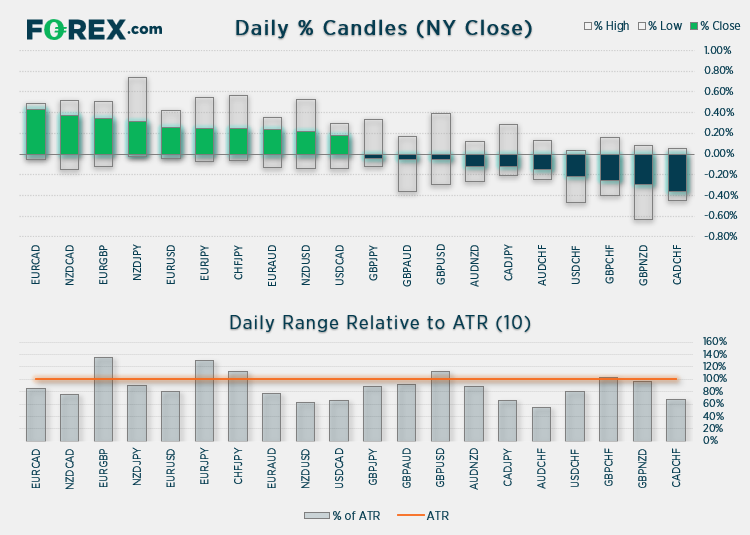 The euro was the strongest major overnight thanks to a strong IFO business sentiment report which rose to a two-year high. EUR/JPY reached the initial targets around the September 2018 high and the May 2021 high yesterday and EUR/USD also confirmed its bullish breakout to its highest level since early January. Prices are now trying to settle above the 1.2243 breakout level and weekly R1 pivot ad out bias remains bullish above the 1.2250 low on the four-hour chart.

This forced the US dollar index (DXY) beneath the February low temporarily to its lowest level since January, and process are now meandering around the February low. Should prices fail to recover quickly, the bias remains bearish beneath 89.85.

The Yuan rose to its highest level since 2018 yesterday, causing China’s state-owned banks to step in and take steam out of the rally. USD/CNH initially broke below 6.4000 but later recovered just above this key level. 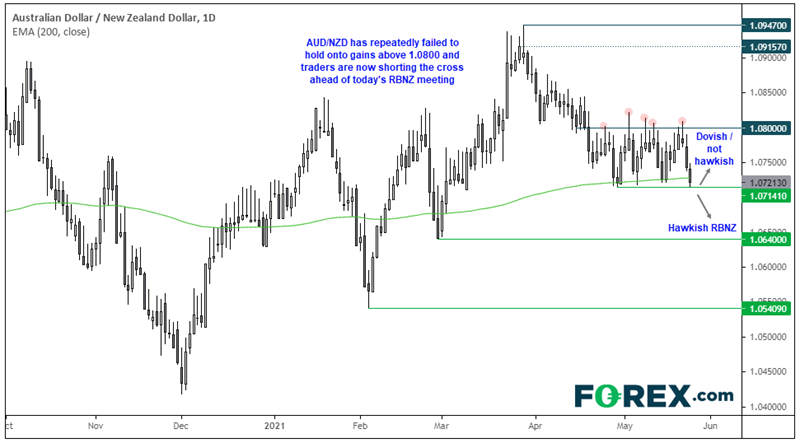 RBNZ (Reserve Bank of New Zealand) release their rate decision at 12:00 AEST and, whilst they are expected to hold rates, there is a risk that the bank will be less dovish and (dare we say) a little more hawkish than previously. Data has been better-than-expected overall, inflation expectations are ripping higher (according the RBNZ data) and fiscal policy remains strong whilst covid remains almost non-existent.

AUD/NZD has fallen for three days ahead of today’s meeting and now trades at the lows of its sideways range. Several attempt to break above 1.0800 failed before rolling over, its bullish trendline support has been broken and prices are currently below the 200-day eMA. Therefore, if RBNZ deliver a hawkish tone, we could see AUD/NZD break key support. Failure to deliver these expectations could also see AUD/NZD rise back inside its sideways range.

Gold prices rose to a fresh four-month high and tested the 1900 handle, thanks to a weaker USD and lower yields. Closing with a bullish engulfing day, the near-term bias is now bullish above its low of 1872.80.

Silver prices are also beginning to take off again after printing a bullish outside day and respecting the 27.40 support level before lift-off. Now momentum has realigned with its bullish trend in its rising channel we are more confidence the corrective low completed at 27.20. You can take a closer look in yesterday’s video.

Copper prices initially rose but found resistance at the weekly R1 pivot. We remain patient and suspect it is trying to carve out a low and the bias for this remains bullish above the February high of 4.375. As they say, bottoms can be a process, tops are an event. 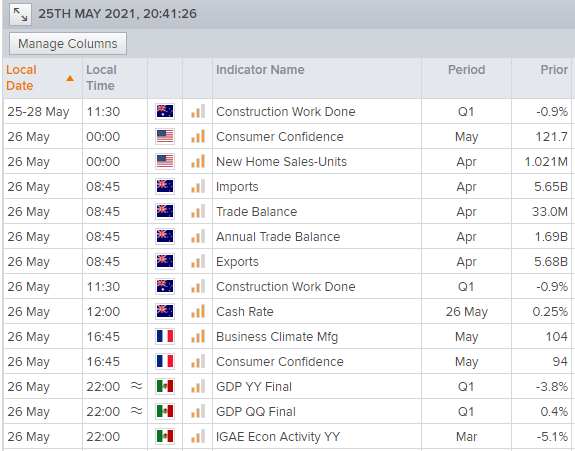