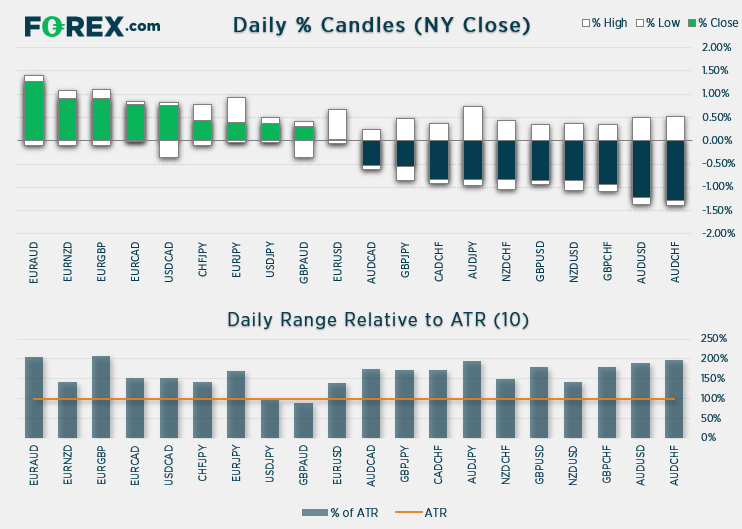 
Asian equities are set to open lower following a bearish lead from Wall Street. ASX futures have tested this week’s low, so we can expect the cash market to gap lower. And it a similar story for the Nikkei 225 and Hang Seng index with all respective futures in the red ahead of the open.

The Nasdaq 100 led the way lower as investors continued to pivot away from the mighty tech sector, with Nasdaq futures falling -3.81%. The S&P 500 is back near its 50-day eMA, a level which has provided support since November. And it’s likely to remain a key technical level for traders as it could signal a more robust change in sentiment should it cave as support. The Nasdaq 100 is re-testing Tuesday’s hammer low and key support around 12,758 – a break below here could likely trigger large stops and add fuel to a bearish fire.

The main concern is that if rates are high, the economy could falter as many companies have the mindset and busines models based upon low rates (forever…). In fact, nobody with debt wants higher rates as those debts become more expensive to service. And yes, that includes the government, Fed and consumers.

The US 10-year now yields 1.54%, its highest level in 12 months after rising an impressive 16 bps. And the 30-year yields 2.34%, a 13-month high after gaining another 10bps overnight. To put these moves into perspective, these are the most aggressive rallies in bond yields since Donald Trump was elected as president. This month alone has seen the 10-year yield rise 45bps and the 30-year add 48bps.

Bond traders are not ‘buying’ the Fed’s stance that rising inflation is of no concern. In fact, they are literally ‘selling’ this stance by offloading bonds which causes yields to rise.

No, that wasn’t a typo. Copper’s surge has finally printed a bearish session (its second most bearish this year, to be exact) after rising to 4.36 before closing around 4.22 (-1.8%). Whilst it isn’t exactly the mother of all crashes it does show a change in sentiment at 10-year highs.

And it was a similar case for metals in general, with gold, silver, platinum, palladium all lower. The Thomson Reuters CRM Commodity index posted a loss at the highs, and it was just oil prices which bucked the trend by positing minor gains for the session (but ultimately flat). And on a session like that, flat is good.

It was another volatile session for currencies as the majority of majors and crosses we track far exceeded their average daily range’s (ATR). And, in the case of AUD and EUR pairs, reached around 200% of ATR. And that doesn’t mean they closed at their highs either.

The risk-off environment has seen the US dollar rise and was the strongest major. USD/CAD and GBP/USD produced large bearish engulfing candles, bearish pinbars formed on AUD and EUR and USD/JPY hit a 5-month high.

The head and shoulders breakout we have been monitoring this week on EUR/USD is suffering from whiplash. Whilst prices are now back near the neckline, the daily candle has closed with a bearish pinbar which makes the setup far less appealing for bulls. In fact, should momentum break back below the neckline it becomes a strong contender for a reversal trade as trapped long scramble to cover their positions. The volatility of euro also eliminated our short bias for EUR/CAD a ‘short’ lived affair (and not in our favour, as it went sharply higher).

AUD/USD managed to high-five 80c for a brief moment before rolling over and breaking beneath Wednesday’s low, to produce a bearish outside candle. Rising yields and the temptation to test a big round number had originally supported the Aussie, yet this was a double-edged sword as such key levels are rife for profit taking.

NZD/USD formed a two-bar bearish reversal (dark cloud cover) on the daily chart at the February 2018 highs. We fancy the odds that a correction is finally due. And with the next major support zone around 0.7253/68, it leaves around another 100 pips of potential downside. 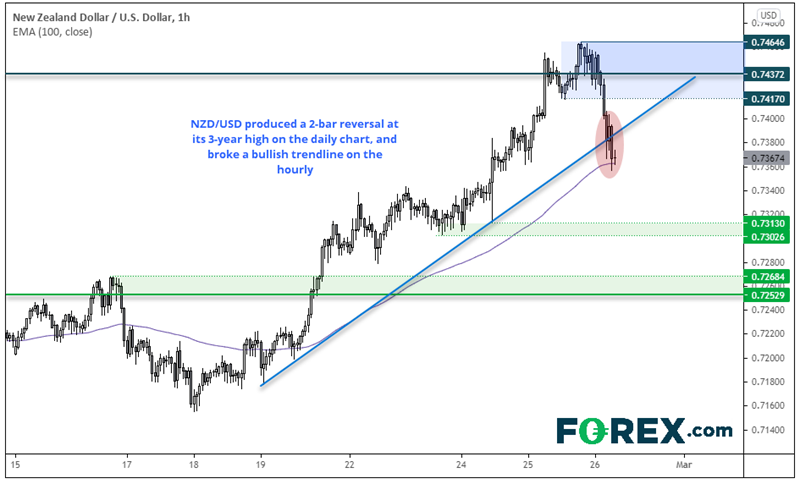 
We can see on the hourly chart that prices have pierced a bullish trendline, although support was found at the 100-hour eMA. This leaves potential for a minor rebound but, with Asia traders yet to react, it could just as easily continue south after key exchanges have opened to participate. A support zone around 0.7300 makes a viable interim target. 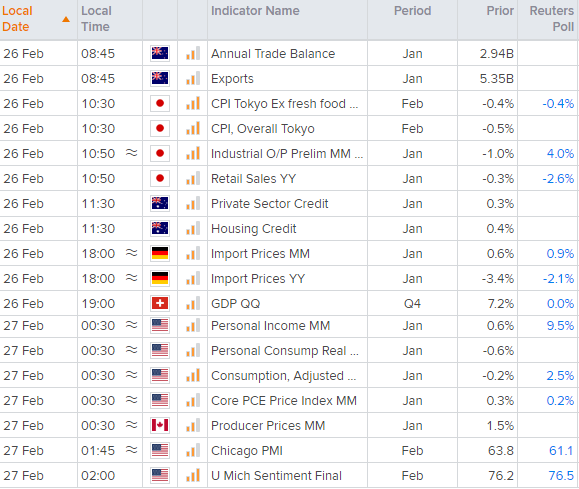 
Inflation data and retail sales for Japan garner’s a look in today’s Asian session, given reports suggest BOJ may tweak (or suggest doing so) a change of policy at their March meeting. Yet the key driver today will clearly be overnight volatility and how Asian traders wish to react. Stay nimble!