BOE on hold, but for how much longer?

The Bank of England left rates unchanged at 0.1% as widely expected.  In addition, they voted 8-1 to maintain their QE target of 875 billion Pounds.  The lone dissenter was Chief Economist Haldane, who opted to vote to reduce the bond buying program by 50 billion Pounds.  Note that this is Haldane’s last BOE meeting, as he will be leaving the committee at the end of the month.

As discussed in our BOE Preview, inflation has been running hot at 2.1%, just above the BOE’s targeted level of 2%.  In addition, employment data over the 2 months since the last meeting has been strong, with the Claimant Count falling 92,600 in May and 55,800 in April, both stronger than expected.  At the previous BOE meeting, members voted to reduce weekly bond buying from 4.4 billion Pounds per week to 3.4 billion Pounds per week.  Given the recent data, some market participants may have been looking for a similar outcome at this meeting.  However, although MPC members revised their 2021 GDP forecast higher, they felt the it would decrease after the temporary increase due to reduction in restrictions.  In addition,  members also said it is possible inflation may exceed 3% in the near-term, before returning to near 2% in the medium.  In other words, the inflation is transitory!  Although not specifically mentioned, the committee may also have been hesitant given that the full reopening date for the UK was pushed to mid-July.  They may want to see how this plays out before tapering further.

Some GBP traders seem to have been caught a little off guard, possibly expecting a more hawkish BOE and betting on a possible taper. After the BOE statement release, the pair immediately fell from 1.3981 down to below 1.3900.  Prior to today,  GBP/USD fell dramatically through 1.4000 on June 16th (FOMC day), and finally came to a halt near horizontal and trendline support at 1.3785.  GBP/USD then bounced to the 61.8% Fibonacci retracement from the highs of June 16th to the lows of June 21st , as well as, the psychological round number resistance level, near 1.4000.  As with some of the other US Dollar pairs, GBP/USD may be forming a flag pattern.  The target for a flag patten is the length of the flagpole added to the breakdown point, which is near 1.3675.  However, if price is to reach the target, it must first pass through the June 16th lows of 1.3796 and the downward sloping trendline near 1.3730.  Resistance is above at the 1.4000 level and then horizontal resistance near 1.4070. Above there, resistance is at the June 16th highs near 1.4138. 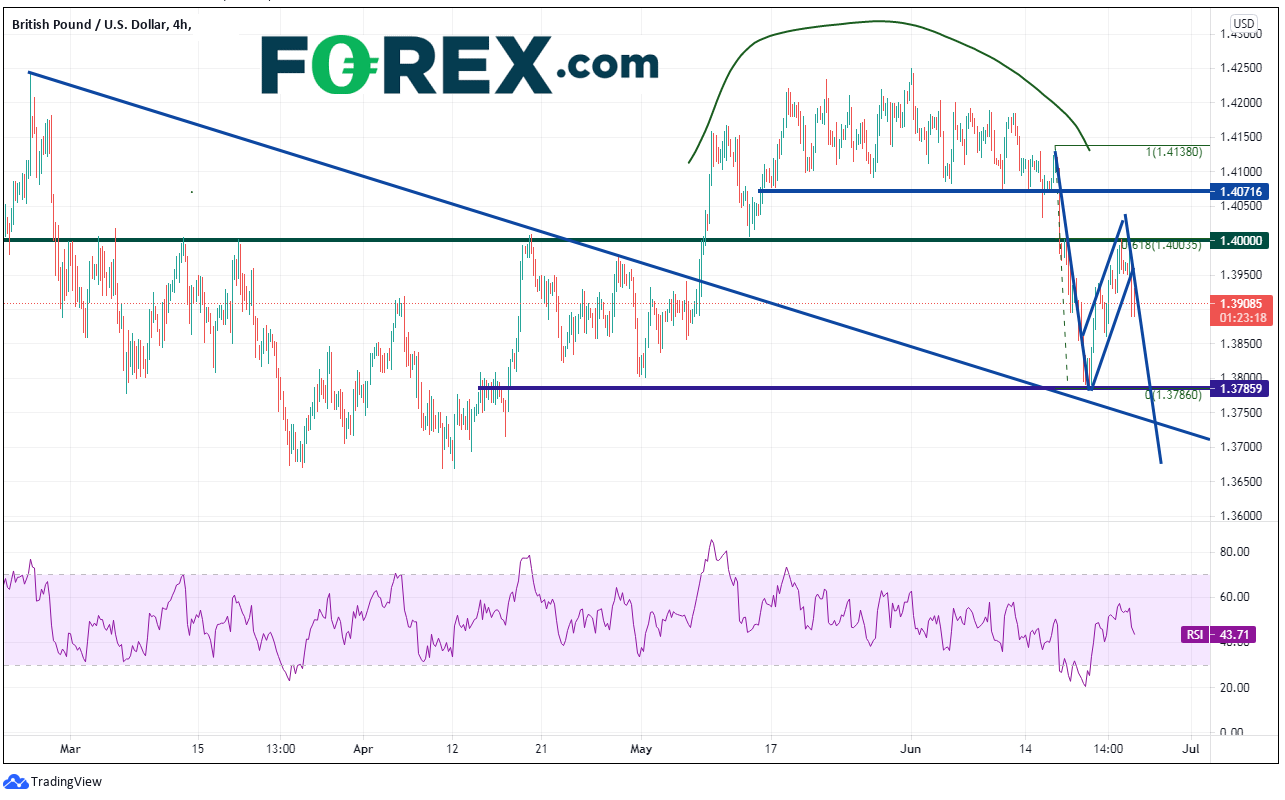 The BOE kicked the can down the road today, just as other central banks are doing.  Tapering will continue at some point in the future. The question comes down to a matter of timing.  Traders will be watching the data and asking the question:  How much longer can the BOE hold out before tapering?