BP announced better than expected earnings thanks to a strong rebound in the price of oil and an exceptional Q1 for its gas trading unit following the Texas freeze. Oil prices have climbed around 25% since the start of the year.

Net debt also fell by $5.6 billion to $33.3 billion, crucially falling below BP’s $35 billion line in the sand to restart the share buyback scheme. The share buyback will resume in the current quarter at a cost of $500 million.

BP had previously warned that Q1 could be challenging amid ongoing lockdown restrictions and travel restrictions. However, these numbers should serve to calm nerves. The covid vaccine rollout should help improve the outlook further, this was reflected in the International Energy Agency upgrading its oil demand forecast for 2021 by 6 million barrels a day. Market fundamentals are considerably stronger.

BP share price rallied 2% across the session and trades + 18% year to date.

What’s in store for Shell?

In the wake of BP’s strong numbers, sector peer Shell is due to report on Thursday 29th April.

Whilst rising oil prices bode well for Shell, the handling of the Texas freeze differs. As mentioned BP which has plenty of experience and a long history of handling disruption benefited from sky rocketing gas prices in the Texas freeze. Shell on the other hand has already warned that earnings will take a hit of about $200 million due to the freak weather conditions.

Whilst Shell is expected to return to profit for the first time since the start of the pandemic, guidance is likely to be underwhelming.

As with BP, Shell’s results come as it attempts to transition into a new cleaner energy giant, not an easy and certainly not a cheap task. Refocusing on cleaner energy is an expensive transition and one that must be paid for by traditional oil assets.

Shell has under-performed BP substantially rising by just 4% so far this year against BP’s 18%.

Shell trades below its descending trendline dating back to early March. It trades below its 50 & 100 EMA on the 4 hour chart in a bearish trend. The RSI is also supportive of further losses.

However, any move lower needs to clear support at 1290p a level which has support RDSB’s share price across the past week.

A break through this level could see the price look towards 1227p February & April’s low.

Should support at 1290p hold, buyers would need a move over 1320p, this week’s high and the descending trendline resistance to negate the current downtrend. Beyond here the 100 EMA at 1350p could offer some resistance. 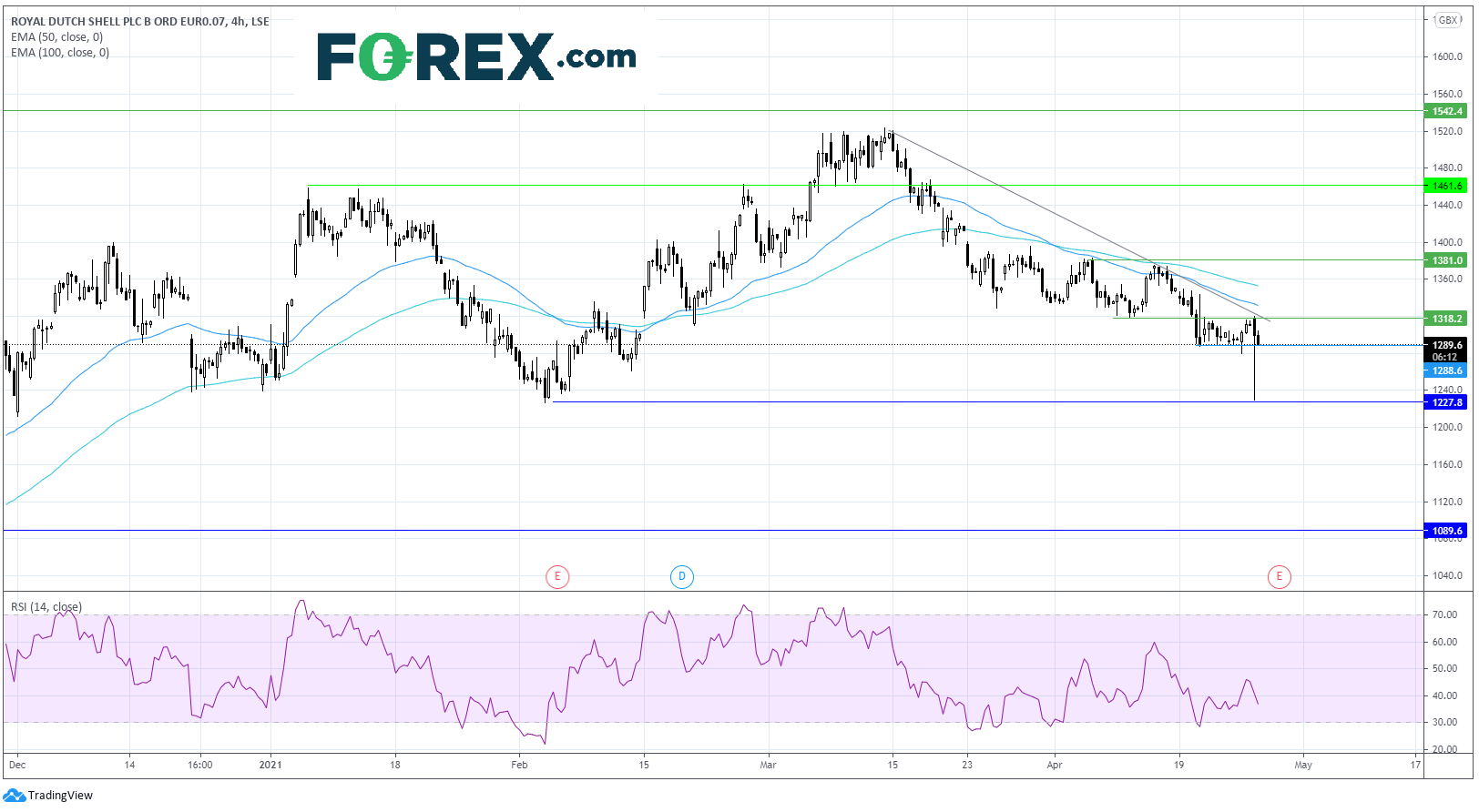