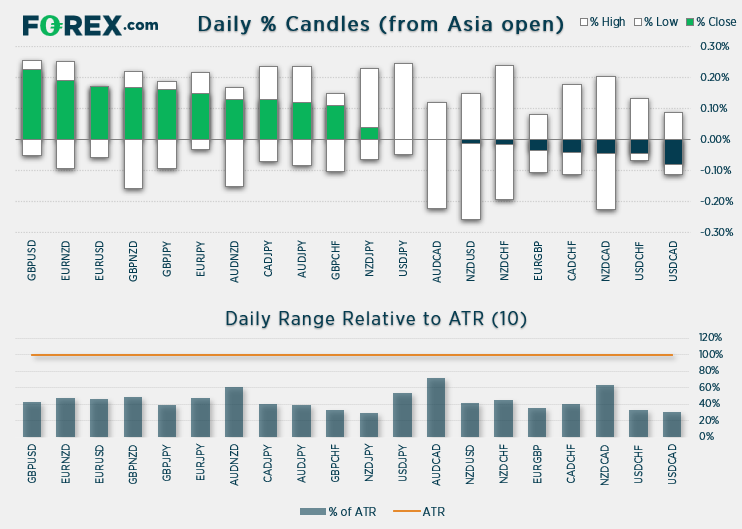 
Equities continue to look at the bright side that Fed remain unconcerned with rising inflation (something bond traders clearly do not agree with). And the highly encouraging results from Johnson and Johnson’s vaccine trial is also supportive of sentiment.


It’s a positive lead for Asian equities, with South Korea’s Kospi 200 (+3.3%) leading the pack. The Hang Seng has recouped +2.2% of yesterday’s losses, where it came under domestic pressure after Hong Kong’s finance minister raised stamp duty to partly fund their $15.5 stimulus program.

The ASX 200 moved to a 4-day high with large caps leading the way, with the ASX 20 rallying 1.21% versus the ASX 200’s 1%. The service and energy sectors were the strongest performers.

Commodities and yields continue to dominate

Copper futures extended their bullish reach overnight, currently trading around 4.35 and trade at a near-10 year high. At some point, it will inevitably come crashing down until then, the trend clearly points higher.

Trading ranges across FX markets have been relatively tight, with most majors and crosses we track achieving around 40-50% of their ATR’s (average true ranges). And it is these quieter periods which allow traders to regroup and gather their thoughts whilst prices consolidate.

The Swiss franc and Japanese yen have been heavily sold but most related crosses are at or near key levels. When you see this, it usually indicates the potential for retracements. Taking AUD/JPY for example, its meteoric rise has found resistance at the June 2018 high and began a retracement already. Given its strong rally, a corrective phase could finally be due. Counter-trend targets (or support for patient bulls) is around 84.00. A break above 84.54 assumes bullish continuation.

The US dollar index (DXY) continues to tease a break below 90, which could prove pivotal for markets. Yet the longer it drags its heels, the greater the odds for a pop higher. And we’d want to see DXY break beneath 90 before assuming EUR/USD can finally break out of its inverted head and shoulders pattern on the daily chart. (Also take note of a potential head and shoulders top on USD/NOK – a break beneath 8.3630 confirms).

EUR/CAD broke to a 7-month low overnight. Unlike other crosses it doesn’t look extensively stretched, so we are seeking bearish opportunities over the near-term beneath the 1.5288 resistance level. 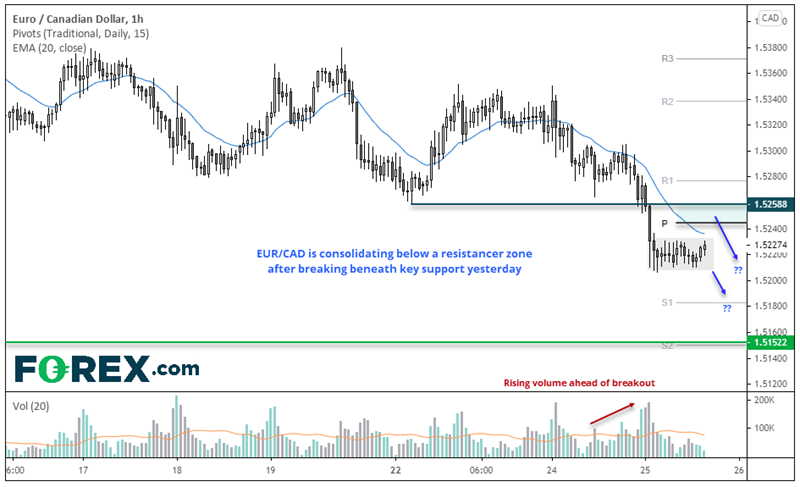 We can see on the hourly chart that prices are consolidating in a tight range beneath the daily pivot and 10-bar eMA. A viable target for bears is around 1.5150 where a historical swing low coincides with the daily S2 pivot. 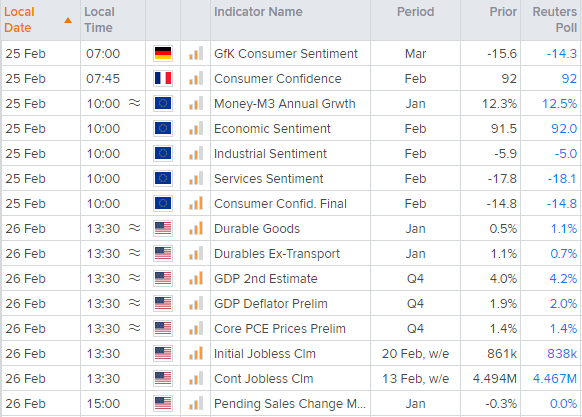 With no major economic news schedule for today, traders may need to rely on large deviations from expectations of second tier data, or a fresh catalyst. Absent that, it then comes down to whether the current sentiment can be sustained, or whether traders will agree that some markets (namely commodities, bonds and JPY pairs) have become too stretched and provide technical repositioning.

On that note, US G4 GDP is expected to be upwardly revised to 4.2% QoQ. Given the Fed are in no hurry to change policy, an even softer GDP print could be ‘beneficial’ for asset prices because it reinforces the view that inflation is not a concern.

CHF/JPY: Second bearish target near the 116.13 – 17 lows reached, after prices rolled over with strong momentum and reached our second bearish target. With prices now in a corrective phase we will monitor its potential for a swing high. The core bias remains bearish below 188.60 on the weekly charts.

GBP/CHF: Initial target around 1.2900 reached after breaking out of a multi-month basing pattern. Given the high wick on yesterday’s daily chart, we’re happy to step aside and reconsider longs after a retracement or period of consolidation.

AUD/NZD: Initial target reached after a strong sell-off yesterday following the RBNZ meeting. With prices now retracing higher we will continue to monitor its potential for another leg lower (and seek a low volatility, bearish reversal pattern).

GBP/NZD: Initial target reached around 1.9000. We’re now seeking a swing high to form on the four-hour or hourly chart after a period of consolidation, or retracement.

EUR/GBP: Its retracement has approached a pivotal level. Whilst we’d be keen to explore bearish setups beneath 0.8620 resistance yesterday’s bullish pinbar suggests a bounce higher may be due. A break above 0.8620 assumes a deeper counter-trend rally.

EUR/JPY: Prices are approaching our initial target around 129.17 – 129.38. A break beneath the 128.65 low on the hourly chart invalidates the bullish bias. We’re too close to target to consider fresh long until prices break above 129.38 resistance.