Fed members comment ahead of Powell’s Speech: Tapering is coming

It’s no secret that St. Louis Fed President James Bullard has been a leading the charge for the Fed to begin tapering it bond purchases.  However, with markets on pins and needles ahead of tomorrow’s speech by Fed Chairman Powell at the Jackson Hole Symposium (See preview here), the reaction to his comments this morning seemed to be a little unsettling:

Yikes!  That last one seems to have really struck home, as the S&P 500 dropped from 4492 down to 4484.75 after the comments (however continued lower after the open).  In addition, earlier Kansas City Fed President said, “less precise about dates than saying sooner rather than later” and “outlook suggest Fed can begin to make adjustments this year”.  Less hawkish, but the message is the same…tapering is coming.  These comment leave traders to guess whether they are foreshadowing Powell’s speech.

Perhaps they were, but bond traders have already been positioning themselves just in case a taper announcement is made.  10 Year Treasury bonds have been selling off all week, and as a result, yields have been moving higher.  10 Year Yields closed last week at 1.262 and traded down to 1.227 on Monday before reversing and screaming higher this week.  As of the time of this writing, the high is 1.3750, up over 10bps from Friday’s close and holding horizontal resistance at 1.376 from August 11th.  Notice the RSI is overbought (as yields are at resistance), suggesting that bond traders may look to take profits ahead of Jackson Hole. 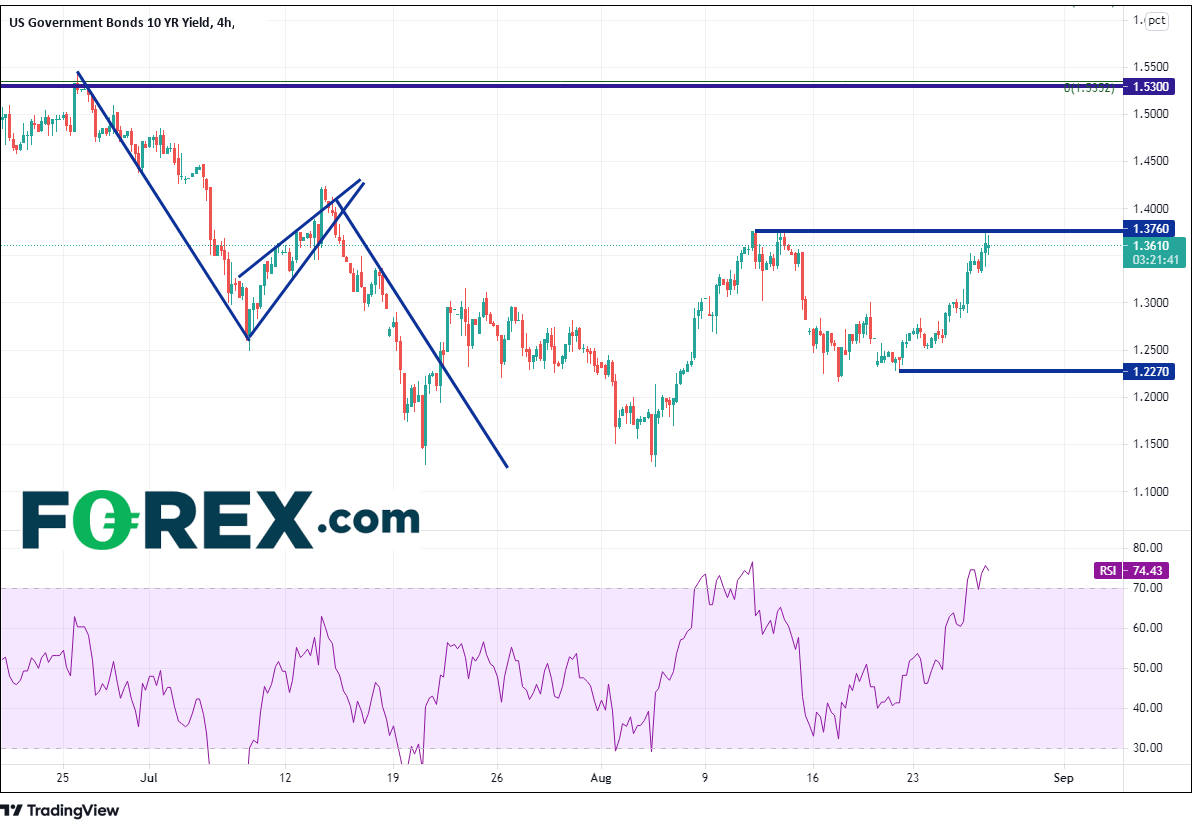 As we’ve pointed out many times before, USD/JPY and US 10 Year Yields are highly correlated (see here).  The current correlation coefficient between USD/JPY and 10-year yields is +0.82.  If yields continue to move higher, watch for USD/JPY to take out the downward sloping trendline of the triangle near 110.50.  The next resistance level is August 11th highs of 110.80.  Above there is horizontal resistance at near 110.95.  However, if yields move lower, USD/JPY could move to take out the bottom, upwards ward sloping trendline of the channel near 109.50.  Support below is at the bottom August 4th lows at 108.63, ahead of the 38.2% Fibonacci retracement level from the January 6th lows to the July 2nd highs at 108.17.

Powell’s speech tomorrow at Jackson Hole may already be priced into the markets.  With yields and USD/JPY already higher this week, we may see a “Buy the rumor, sell the fact” trade.