As we noted earlier this week, Friday’s highly-anticipated non-farm payrolls report comes out at a bit of an awkward time; for the first time in six years, the April jobs report falls on the Good Friday holiday, meaning that many major markets will be closed. As a result, readers who are at their desks trading the FX or bond markets may see less liquidity than usual and the post-release move may peter out sooner than usual as traders who are watching the markets look to duck out early to enjoy a long holiday weekend.

Interestingly, economists are expecting a strong reading, with headline jobs growth expected to come in at 652k (a potential 6-month high) and the unemployment rate expected to drop 2 ticks to 6.0%. That said, the always-important average hourly earnings figure is anticipated to rise just 0.1% m/m, suggesting that any inflationary pressures may still be a ways off. 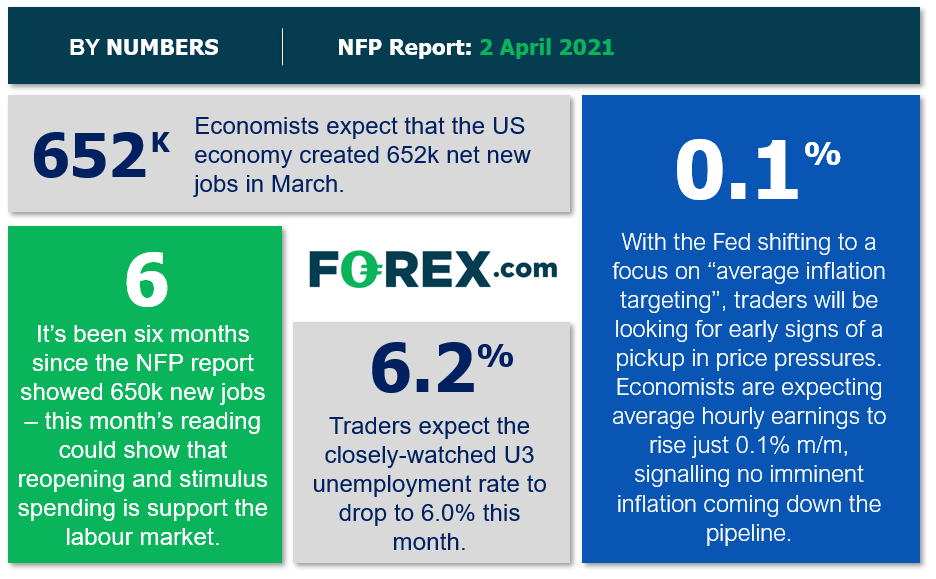 As regular readers know, there are four historically reliable leading indicators that we watch to help handicap each month’s NFP report, though given the vagaries of the calendar this month, the ISM Services PMI figure won’t be released until Monday:

As we’ve noted repeatedly over the last few months, traders should take any forward-looking economic estimates with a massive grain of salt given the truly unparalleled global economic disruption as a result of COVID-19’s spread. That said, weighing the data and our internal models, the leading indicators point to a worse-than-expected reading from the February NFP report, with headline job growth potentially coming in somewhere in the 400k-500k range, albeit with a bigger band of uncertainty than ever given the current state of affairs.

The US dollar rallied impressively through the month of March, boosted by an uptick in treasury bond yields. In fact, the world’s reserve currency has reached overbought conditions against some of its rivals for the first time in over a year.

Considering the recent price action, the risk a selloff in the US dollar is elevated if the jobs report fails to meet expectations. In that scenario, the beaten-down EUR/USD could have room to recover back toward its 200-day EMA and previous support level near 1.1830 through early next week.

On the other hand, a stronger-than-anticipated jobs report could create a sell opportunity in GBP/USD, which has stabilized around its 50-day EMA so far this week. A break below this week’s low near 1.3700 could open the door for continuation toward 1.3600 in the coming days.