Tencent shows that China’s crackdown has some cracks

Chinese regulators have recently come down hard on tech companies due to what they say are antitrust issues, monopolistic behavior or other breaches of consumer rights.  However, Tencent (TCEHY) bucked the recent trend as regulators unconditionally approved the buyout of search-engine Sogue Inc, in a deal worth nearly $2 billion.

What’s more intriguing about the timing of this approval by the State Administration of Market Regulation is that on Saturday, regulators stopped Tencent from merging gaming platforms HUYA Inc and DouYu International Holdings, citing that it would prevent competition.  Sogue is a rival to Baidu, which now makes Tencent a large threat to Baidu.

On a daily timeframe, Tencent had been moving higher since forming strong horizontal support near 39.40, which was last tested in March 2020.  Shares put in a high of 99.40 on February 21st, which appears to be the head of a Head and Shoulders pattern.  The stock moved lower and formed the right shoulder of the pattern, breaking the upward sloping neckline on July 6th near 73.90.   Thus far, price has pierced, but held, the 50% retracement level from the March 16th, 2020 lows to the February 21st highs near 69.70. 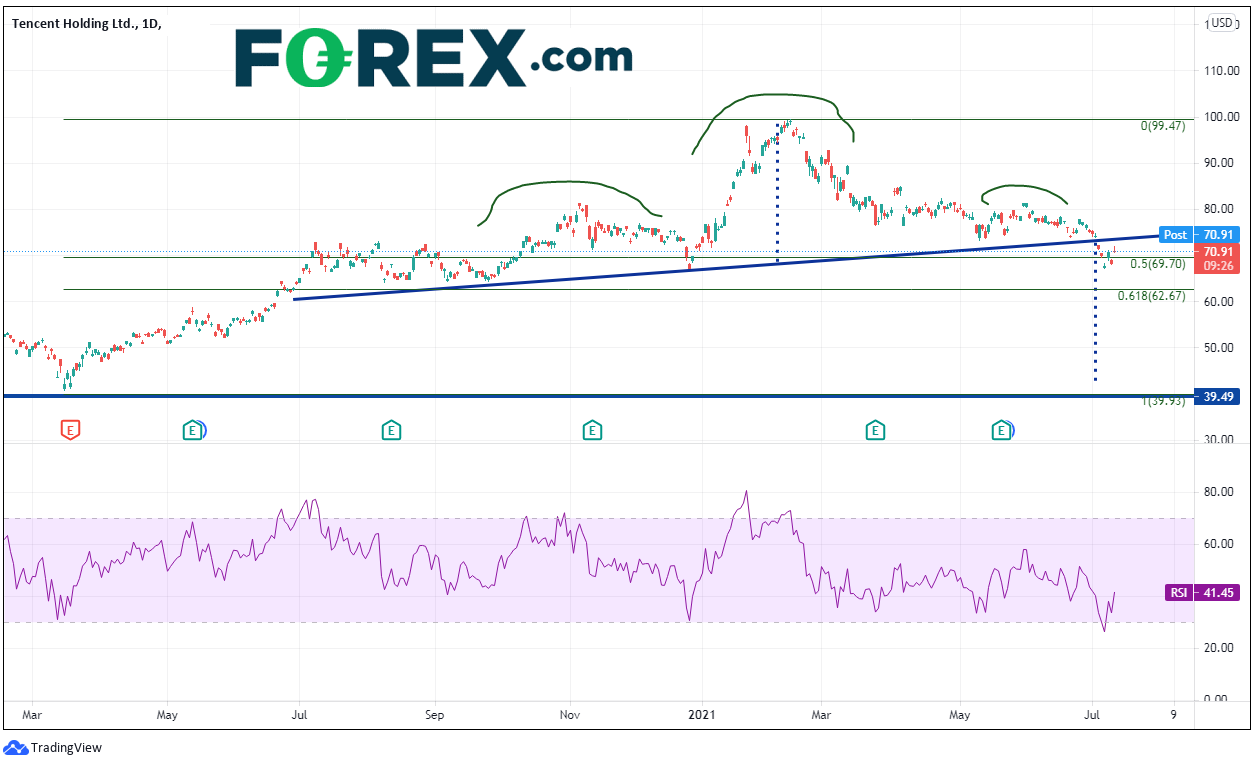 The target for a head and shoulders pattern is the length from the head to the neckline added to the breakdown point below the neckline, which in this case is near 42.70.  Tencent would first have to fall back below the 50% retracement level and through the 61.8% Fibonacci retracement of the previously mentioned timeframe, near 62.67, before heading to target.  Horizontal resistance and a gap fill from July 2nd provide resistance near 73.90.  Resistance above is at the neckline of the pattern, which currently crosses near 74.25.  Above there, the next resistance isn’t until the gap fill of the island reversal for the right shoulder from June 2nd, near 80.50.

Although Tencent claimed a victory over China regulators, the company, and the sector, still have a long way to go if they are to meet the “ new and enforced” standards the government has set.  In the meantime, Tencent may be on its way to the head and shoulders target!