Dunelm’s deputy chairman Will Adderley, the son of the company’s founders, has sold a chunk of his stake in the homewares company for around £192 million.

He sold 15 million shares, equal to a 7.4% stake in Dunelm, for 1,280.0 pence each. The shares have been bought by institutional investors.

The company said the Adderley family still hold a 43.2% stake in the business following the sale and that Will ‘remains fully committed to Dunelm in his role as deputy chairman as well as remaining a very substantial shareholder in the company.’ Dunelm has stressed that the sale is being made because Adderley wants to diversify his portfolio.

Last week, Dunelm reported strong growth in revenue and profit during the first half of its financial year as demand held up over the final months of 2020, allowing it to continue generating cash and reinstate its dividend.

Free cashflow improved significantly to £98 million from £63.9 million the year before, pushing it into a net cash position and allowing it to restart dividends with a 12.0 pence payout. It ended the period with net cash of £140.9 million compared to a net debt position of £67.7 million a year ago.

Last week Dunelm pushed back above a descending trendline resistance which dated back to mid-October. The share price rallied to a 3-month high of 1420 struck yesterday.

Today’s 7% decline has taken the share price back to the descending trendline resistance turned support at 1260. The RSI has also moved out of overbought territory and is heading back to wards neutral ground at 50. Whilst the 20 & 50 sma on the daily chart also show a neutral bias.

If the trendline support holds, a close above 1260 could see an attempted recovery back towards 1420p.

However, a close below 1260 brings 1225 support the 20 & 50 sma on the daily chart into play. Should the bears break through here the selloff could gain traction towards 1100 a level which has offered support since mid-December. 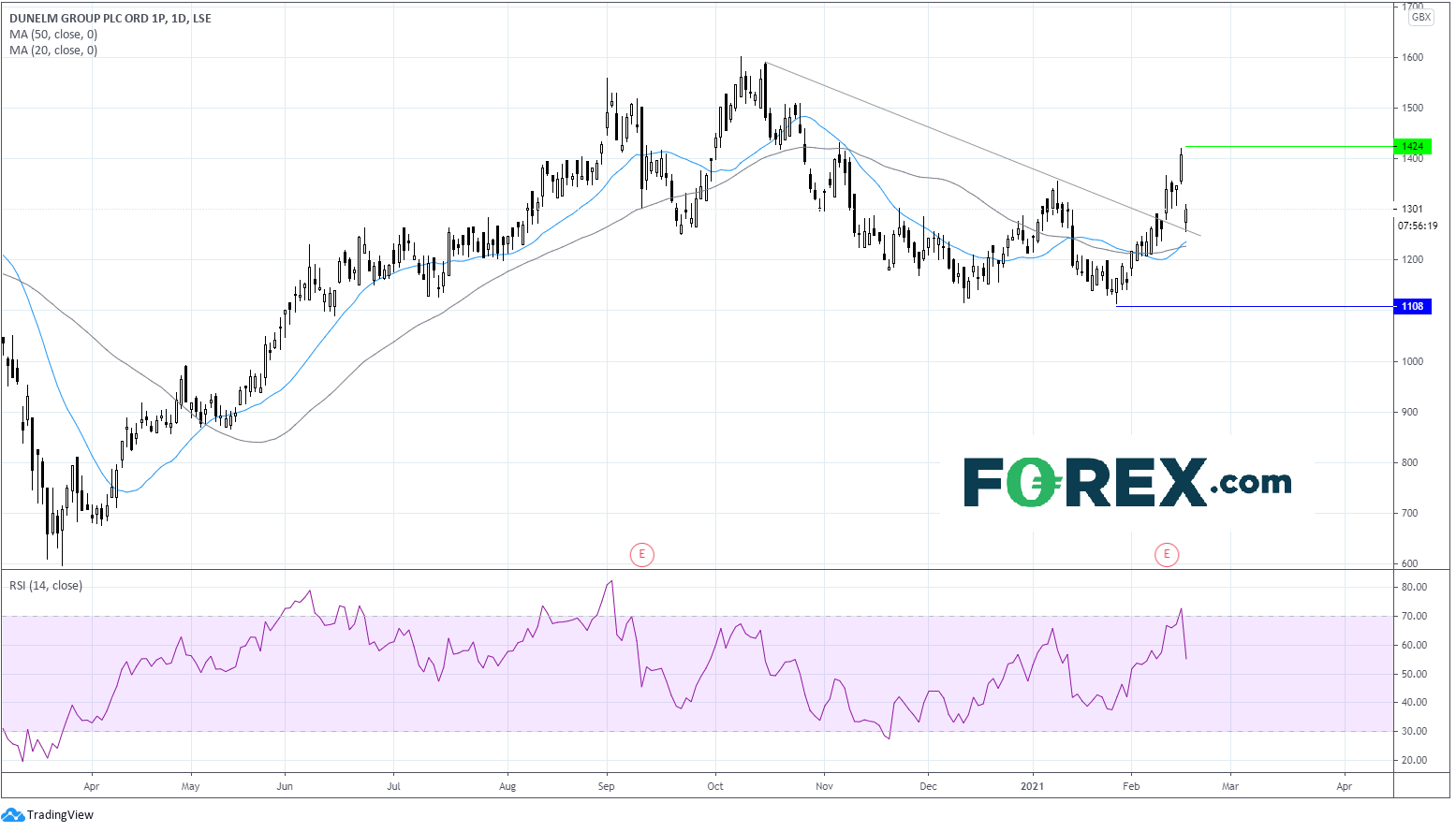 Glencore said it has decided to resume dividend payments after strong cashflow in 2020 allowed it to pay down debt to more sustainable levels.

The miner said adjusted earnings remained broadly flat in 2020 as a strong recovery in commodity prices in the second half of the year offset recessionary conditions in the first. Revenue fell 34% to $142.33 billion from $215.11 billion in 2019. Adjusted earnings before interest, tax, depreciation and amortisation were flat at $11.56 billion and adjusted Ebit was up 6% at $4.41 billion.

However, the net loss at the bottom-line widened significantly to $1.90 billion from $404 million.

Glencore said the rise in Ebit was down to a an ‘outstanding’ performance from its Marketing arm that trades in commodities around the world, which offset weaker earnings from its mining arm because of lower coal prices. Earnings from its Katanga copper mine in the DRC also resulted in earnings from its African operations more than double during the year.

The recovery in prices fed through to cashflow in the second half and the company said this allowed it to end the year with net debt of $15.8 billion compared to $17.55 billion at the end of 2019. Net debt is now within its desired range, equalling 1.37x adjusted Ebitda, allowing Glencore to resume dividends with a 12 cents per share payout.

BHP Group said it is paying a record interim dividend for the first half after profits jumped on the back of an improved performance from its iron ore and copper operations.

The miner said it was returning over $5 billion to investors with a record interim payout of $1.01 per share, a large 55% lift from just 65 cents the year before. That rise represents an 85% payout ratio and is underpinned by a 26% rise in net operating cashflow to $9.36 billion.

‘Our operations generated robust cash flows, return on capital employed increased to 24 per cent and our balance sheet remains strong with net debt at the bottom of our target range. The Board has announced a record half year dividend of US$1.01 per share, bringing BHP's shareholder returns to more than US$30 billion over the past three years,’ he added.

Profits from operations rose 17% to $9.75 billion thanks to higher iron ore and copper prices, which it capitalised on with record production of iron ore in Western Australia and record average throughput at the Escondida concentrator.

BHP tweaked its production guidance for the year, narrowing its range for Escondida and inching up its iron ore target to take the restart of Samarco into account.

Serco Group said it has agreed to buy Whitney, Bradley & Brown for $295 million from HIG Capital, boosting its presence in North America.

Whitney, Bradley & Brown provides engineering and technical services to the US military and will provide Serco with ‘a strong platform from which to address all major segments of the US defence services market.’

The company said the purchase will immediately boost earnings when it is completed in the second quarter of 2020, subject to securing the regulatory clearances. The deal is being funded with debt.

Serco said Whitney, Bradley & Brown is forecast to make $230 million of revenue in 2021 and earnings of around $29 million.  Serco said this increases its total revenue from North America defence contracts by around 20% and double revenue from the US Army and Air Force, building on its existing strong relationship with the US Navy.

Playtech partners with Greenwood to expand in the US

Gambling software maker Playtech said it has signed deals with Greenwood Racing to licence out its products to the US company’s casinos in Michigan, Indiana, New Jersey and Pennsylvania.

The company said the partnership would start with the launch of an online casino in Michigan.

‘This strategic partnership with the Greenwood companies represents a major milestone for Playtech and I'm excited to work with them to help achieve their growth plans in the coming years. The US is a highly strategic market and this multi-state, multi-product agreement highlights the demand for the full breadth of our product offering. This is the next step for Playtech in the US and we are delighted to work with the Greenwood companies to capture this exciting long-term opportunity,’ said Playtech’s chief executive Mor Weizer.

Safestore said the strong momentum experienced last year has continued into early 2021 as it reported strong growth in revenue thanks to letting out more space at higher prices.

The self-storage space provider said revenue rose 11.2% in the three months to the end of January 2021 to £44.4 million from £33.9 million. Revenue partially benefited from favourable exchange rates but still rose 9.8% even when this was stripped out.

That rise was driven by an 11% surge in the amount of space it has leased out. Notably, it has plenty of space left to let and has continued to expand during the period. Just over 80% of its total space was let at the end of January compared to only 74% the year before. Plus, the average storage rate has inched up 1.5% to £26.27 from £26.07. On a like-for-like basis, revenue was up 8.1%.

‘I am pleased to report that the strong performance of the final quarter of our 2020 financial year has continued throughout the first quarter of 2021 driven by an excellent UK result, complemented by solid performances from Paris and Spain. In addition, our joint venture with Carlyle, operating in Belgium and the Netherlands, is performing in line with its business plan,’ said chief executive Frederic Vecchioli.

‘Our recently opened developments in the UK in Carshalton, Sheffield and Gateshead are performing well and our Birmingham Middleway and Paris Magenta stores are due to open in the first half of 2021. We anticipate that our new store pipeline will grow over the coming months and our strong and flexible balance sheet provides significant funding capacity, allowing us to continue to consider strategic, value-accretive investments as and when they arise,’ he added.

LXI REIT said it is launching a placing and open offer to raise around £75 million to help fund a pipeline of investments in the likes of drive-thru coffee shops, garden centres, foodstores and industrial sites.

The offer will see up to 60.1 million new shares issued at a price of 124.50 pence per share, a 2.3% premium to its net asset value at the end of 2020 but a 3.0% discount to its closing share price yesterday. The offer will need the backing of shareholders at a general meeting ‘on or around’ March 10. The open offer will entitle existing shareholders to buy 3 new shares for every 26 shares they already own.

The funds will go toward the £140 million investment pipeline that is focused on ‘defensive and structurally supported sub-sectors, including foodstores, industrial, drive-thru coffee and garden centres.’

‘They benefit from a long weighted average unexpired lease term to expiry of 21 years and to first break of 20 years and a blended net initial yield of 5.5% (net of acquisition costs). These assets are diversified by location and leased to a range of institutional-grade tenants with strong financial covenants, with rental uplifts linked to inflation or a fixed growth rate and with a good mix within the pipeline of built assets and forward funded structures,’ said LXI REIT.

The closed-end investment firm has deployed £843 million worth of equity and debt since being founded in February 2017, and said it was considering raising further equity in the future if the right investment opportunities arise.

LXI REIT also said that it had continued to collect rent despite the problems posed by the pandemic. The company said last week that it was targeting a higher annual dividend of 6.0 pence per share instead of the previous 5.75p.

Below is a guide to the top news about upcoming UK IPOs.

You can read more about these IPOs and other potential upcoming IPOs in our Top UK IPOs to Watch out for in 2021.

Deliveroo could become a publicly-listed company next month, according to Sky News.

The company is expected to file paperwork outlining its intention to list on March 8 and shares could start trading just weeks later. The date is not definitive and could change.

The listing would allow the company to capitalise on the growth being seen in the delivery markets during the pandemic, as more people order-in everything from groceries to takeaways as they stay at home. This has accelerated growth and will allow it to achieve a higher valuation.

Sky News reports it could achieve a valuation of up to £7.5 billion. That would mean a Deliveroo IPO would be the biggest listing this year so far, following other recent listings like Moonpig and Dr Martens.