Fresnillo said production was lower last year because of lower volumes at Herradura, continued problems at Noche Buena and because coronavirus restrictions have impacted operations. The fall in output this year is going to be driven by Noche Buena and lower grades at Cienega.

In terms of the fourth quarter, silver output fell 2.5% quarter-on-quarter and 6% year-on-year to 13 million ounces.

Whilst Fresnillo shares enjoyed a steep recovery from the mid-March lows, this recovery stalled between August to early November trading a range of 1385 – 1150. Since early November the price has trended lower.

The Fresnillo share price trades below its 50 & 100 sma on the daily chart. The 50 sma also formed a bearish cross below the 100 sma and the RSI is in bearish territory supportive of more selling whilst the RSI remains above the oversold level of 30.

Whilst Fresnillo declined sharply on the open, it found support at 1000 round number and psychological number. Beyond this support level the bears will be eyeing a move to 870 resistance turned support from June’s high.

Any attempt at a rebound will see resistance at 1130 the 50 sma ahead of 1190 100 sma and horizontal support at 1280. A move above this level could negate the current downward trend. 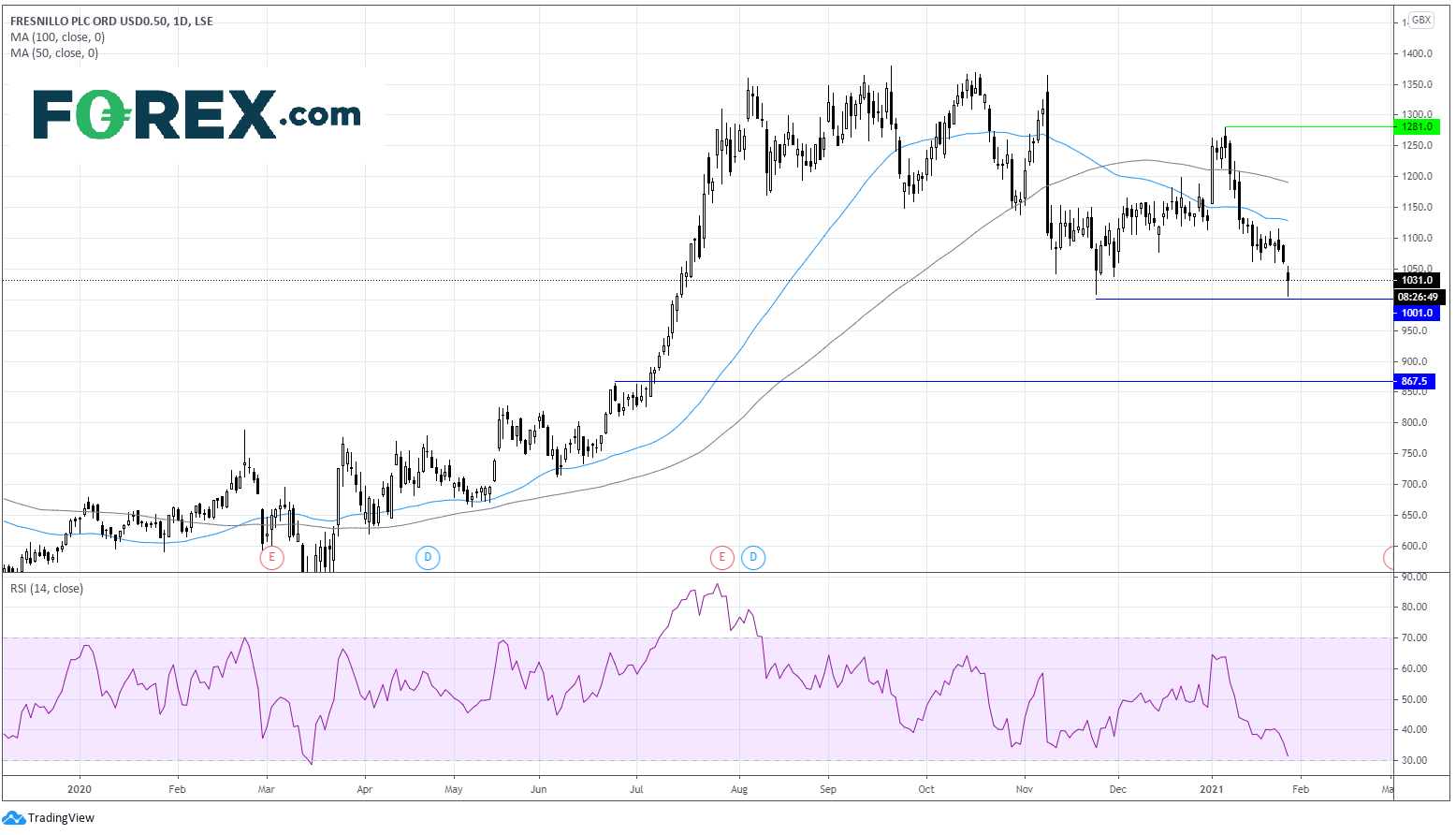 3i Infrastructure on track to raise dividend despite income drop

3i Infrastructure saw income almost halve in the final quarter of 2020 but said it is still intending on raising its dividend payment for the full year.

The company, which invests in infrastructure, said total income in the last three months of the year fell 45% to £24 million from £44 million a year earlier. However, it said its portfolio ‘continues to be resilient through the ongoing Covid-19 pandemic’ and said results were in line with its expectations.

‘During the period we have been pleased by the resilient performance of our portfolio and have continued to progress a number of potential investment opportunities from our pipeline.  Our markets remain very competitive despite the uncertainties caused by the pandemic, but we are maintaining our investment discipline and continue to focus on investments that we believe will enhance the company's portfolio,’ said Phil White, managing partner and head of infrastructure.

3i Infrastructure said it has £481 million in cash at the end of December, excluding the £44 million interim dividend payment it made this month. The company said it remains on track to pay a dividend of 9.8 pence in the year to the end of March 2021 – a 6.5% rise from the last financial year.

The company said it made some follow-on investments during the quarter, including pumping an additional EUR25 million into its Dutch projects, and progressed the purchase of the BP fibre cable system in the Gulf of Mexico, which should be completed before the end of March.

FDM Group said it will pay a second interim dividend after being encouraged by its performance and cash generation, allowing it to return to normal payouts going forward.

The company said revenue in 2020 fell to £268 million from £272 million the year before, while adjusted pretax profit dropped to £42 million from £54.5 million.

‘FDM has delivered a solid performance for 2020. Although we are alert to the possible impact on client activity of further lockdowns, our agile and robust business model has allowed us to respond rapidly and effectively to the exceptional challenges the COVID-19 pandemic has brought. The current year has started promisingly with encouraging levels of demand across most sectors and geographies,’ said chief executive Rob Flavell.

FDM decided not to pay a final dividend for 2019 when the pandemic erupted last March but managed to pay an interim dividend for the first half of 2020 when it performed better than expected. It said this morning that its performance and cash generation have continued to be strong, prompting it to pay a second interim dividend of 13.0 pence. It will paid on February 26 to shareholders on the register on February 5.

‘The board confirms that going forward it plans to resume the group's normal dividend policy and timetable, commencing with the final dividend for the year to 31 December 2020, which the board intends to recommend at the time of the publication of the full year results on 10 March 2021 for approval by shareholders at the 2021 AGM,’ the company confirmed.

LondonMetric Property has bought two urban logistics warehouses – one in London and one in Redditch – for a total of £13.2 million.

The company said the deal reflects a blended net initial yield of 4.7%. The warehouses are let for 15 years and rents are linked to RPI.

The London site cost £7.7 million and has 20,000 square feet of space that is currently let to carmaker Ford as a service and parts centre. Ford pays £350,000 in rent each year. The Redditch site cost £5.5 million and is a newly-developed 46,000 square foot site that is let to Heartbeat Manufacturing for £300,000 a year.

‘These are high quality urban logistics acquisitions let on long leases with guaranteed rental growth. They are well located, in good geographies where the underlying value of the land significantly underwrites the purchase price,’ said chief executive Andrew Jones.

Diversified Gas & Oil said it produced more oil and gas at a lower cost in 2020, putting in a good position to benefit from any rise in prices driven by the global economic recovery from the pandemic.

‘We've built our business to operate in any natural gas price environment, and the strength of that model was evident throughout the significant volatility of 2020. Not only did our business model perform well, but the resolve of our employees was outstanding,’ said chief executive Rushty Hutson.

‘With a strong balance sheet, efficient cost structure, improved commodity price outlook, strong hedge protection and a robust outlook of potential accretive growth, we are poised for another exceptional year,’ he added.

Brewin Dolphins said total funds climbed to a record high in the last three months of 2020, helping it post a strong rise in income.

The wealth manager said total funds increased 8% during the first quarter of its financial year to £51.4 billion compared to £47.6 billion a year earlier. That now sits higher than pre-pandemic levels and represents a new all-time record. That helped drive a 7% rise in quarterly income to £95.9 million.

‘We had a strong start to our financial year and saw growth across both our direct and indirect business. We are consistently delivering positive inflows, even with the tightened social distancing restrictions imposed in November and December 2020. Broadening our distribution channels continues to add value, with momentum across both our 'Powered by Brewin Dolphin' solution and our recently launched Brewin Dolphin Voyager funds,’ said chief executive Robin Beer.

‘We remain on-track with the implementation of our custody and settlement system to be completed in the Autumn this year. With a Brexit trade deal behind us and the rollout of vaccinations in the UK, market sentiment is starting to improve, and we look forward to benefiting from this recovery over the coming year,’ he added.

Brewin Dolphin will release interim results covering the six months to the end of March on May 13.

Henderson Smaller Companies Investment Trust said it outperformed its peers during the first half of its financial year due to ‘the strength of our fund management team, their disciplined approach and stock-picking ability.’

Net asset value total return per share rose 20.6% in the six months to the end of November, just behind the 20.8% rise posted by its benchmark index. However, the trust said this was 6.3% ahead of the average achieved by its peers in the AIC UK Smaller Companies sector. It delivered a share price total return of 27.7% in the period.

The trust kept its interim payout flat from last year at 7.0p pence.

‘Looking forward into 2021, I think there are many reasons to be optimistic about the prospects for UK smaller companies. The roll out of the Covid-19 vaccines may result in a return to some sort of normality and the Brexit free trade deal means that business can continue with Europe, albeit with an increase in paperwork. Strength of franchise, market positioning and balance sheet will determine the winners from the losers in the post Covid-19 world and, thanks to the diligence of our Fund Managers, these companies are well represented in our portfolio, said chairman Jamie Cayzer-Colvin.

Henderson Smaller Companies Investment Trust shares were up 0.9% in early trade at 1035.0.

Home repairs and improvements company Homeserve has appointed Tommy Breen as an independent non-executive and said he will succeed Barry Gibson as chairman on May 19.

Breen was previously the chief executive of marketing and sales services group DCC. He is currently a senior independent director of packaging firm Essentra.