Melrose Industries has agreed to sell Nortek Air Management to Madison Industries for around £2.6 billion, with proceeds set to be used to reduce debt, plug the gap in its pension scheme and to reward shareholders.

‘The disposal demonstrates the strength of the Melrose strategy.  We bought Nortek, an underperforming group, which we felt had outstanding potential in 2016 for £2.2 billion,’ said chairman Justin Dowley.

‘We have seen approximately $1 billion of cash inflows from the Nortek group during our ownership, effectively giving us an in-price of $1.8 billion,’ he added.

‘The businesses being sold today for £2.62 billion ($3.625 billion) represent 73%, by revenue, of the Nortek group and the returns are excellent. Our Ergotron and Nortek Control businesses which also form part of the Nortek group remain under our ownership and will be realised at an appropriate time,’ said Dowley.

Melrose said the net proceeds will be used to cut debt and contribute to its pension scheme. Around £100 million will be paid into the GKN pension scheme. A ‘portion’ of the funds will be returned to shareholders, although no specific details were released.

The sale is expected to be completed in the second or third quarter of 2021 and is conditional on shareholder approval.

Melrose has been trading relatively range bound since February, capped by an upper band around 180 and by a lower band of 162.

After hitting 162 at the end of March the price has rebounded higher. It trades above its ascending trendline dating back to 23rd March, and also above its upward sloping 20 & 50 EMA on the 4 hour chart indicating a near term bullish trend.

The RSI is at a positive level and below over bought territory so could see more upside to come, although lacks strong directional bias.

Today’s jump higher took the price over the 180 upper band. However, it failed to hold onto those gains. 180 is once again acting as the near-term resistance ahead of 183.6 today’s high.

Strong support can be seen at 175, the 20 EMA and the ascending trendline support followed by 173.50 the 50 EMA. This could prove to be a tough zone of support to break through. 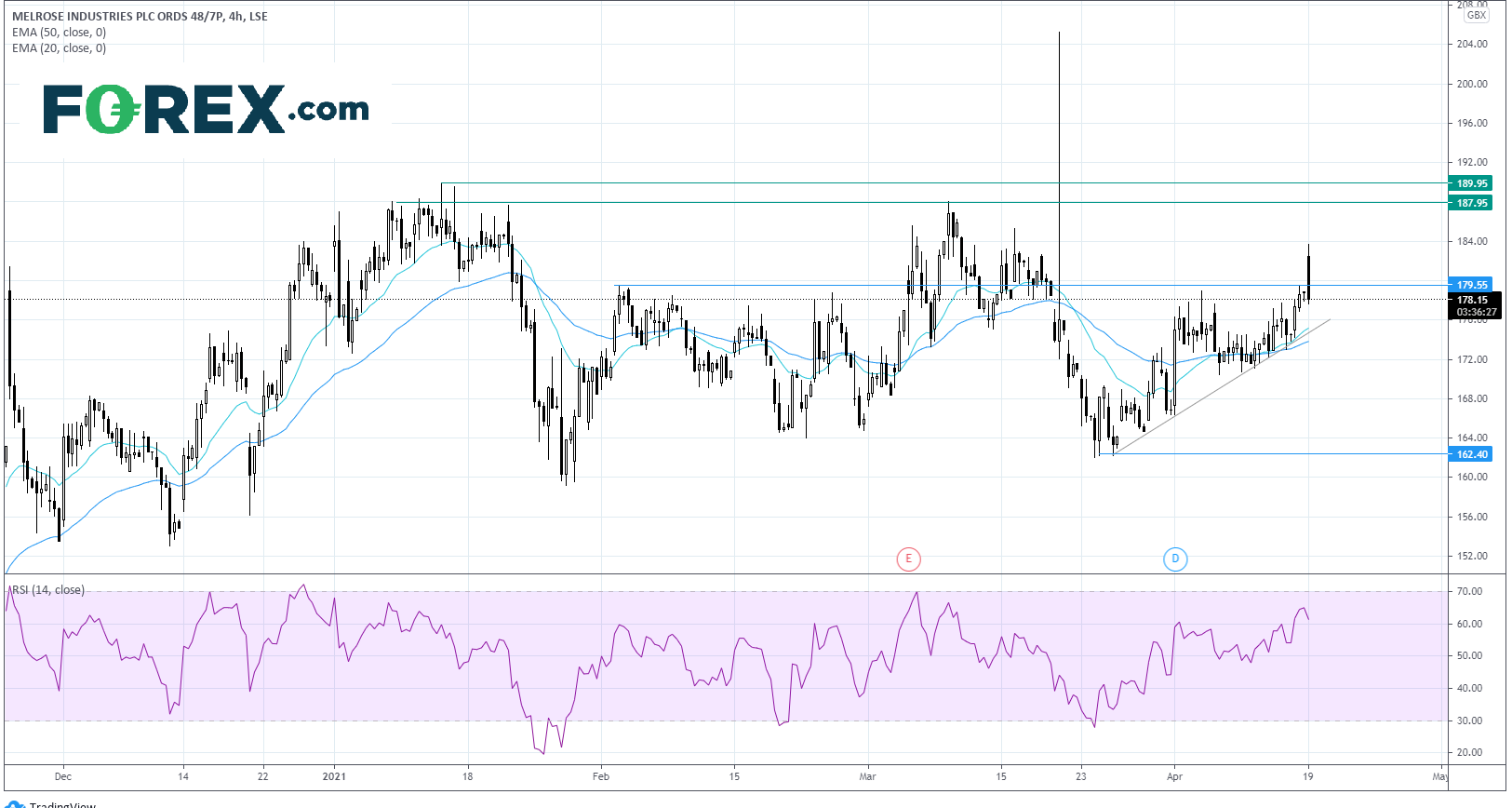 Johnson Matthey said it has now secured long-term and sustainable supplies of the critical metals needed to build batteries for electric cars and chosen to build another plant in Finland to ramp-up its manufacturing capacity.

The chemicals company has been building a supply chain of battery metals to supply plants that can build batteries for the electric vehicle market. The company said it has started designing a second commercial plant in Finland that will be powered by renewable energy and use sustainable materials.

Johnson Matthey has partnered with Finnish Minerals Group, which already boasts an integrated supply chain for electric vehicle batteries. The company manages the Finnish state’s investments into the mining industry. Finnish Minerals main tasks under the partnership will be to help co-develop a new way of treating sodium sulphate in order to make the process more sustainable and to help develop a new way of pre-treating nickel and cobalt sulphates to ensure they are suitable to make the nickel cathode materials needed to make batteries.

Johnson Matthey said it has also signed a deal with Nornickel for the supply of nickel and cobalt from the company’s operations in Finland and Russia. These materials will supply the new plant in Finland as well as the first one in Poland. It has also struck a separate agreement to source lithium hydroxide from SQM’s mines in Chile.

‘The partnership with Finnish Minerals Group, and the long term supply of critical raw materials with Nornickel and SQM, are important milestones on our journey towards developing a sustainable battery materials ecosystem and further demonstrate the progress we are making on the commercialisation of our business. With sustainability at the heart our strategy and an increasingly important requirement for our customers and consumers, we are delighted to be working with our partners to deliver sustainable cathode materials to the market,’ said chief executive Robert MacLeod.

Vodafone to provide digital assistance with vaccine rollout in Africa

Vodafone’s South African telecoms unit Vodacom has agreed to provide help to the vaccine rollout across Africa by allowing some countries to use its mobile phone tools to let people book vaccine appointments and to manage stock.

Vodacom has struck a deal with the African Union Development Agency to help speed up the rollout of vaccines in up to 55 countries in the African Union. This follows a successful implementation of the technology in countries like South Africa, where it has been used to manage vaccinations, and Mozambique, Tanzania and Nigeria, where it has been helping organise jabs for infants.

The digital toolbox – named mVacciNation – is already being used to register health workers in South Africa. The two main aspects of the toolbox are the ability to provide real-time supply information to workers on the availability of things like syringes, and the ability for people to book appointments automatically online.

‘Vodacom has been at the forefront of helping governments where we operate to curb the spread of Covid-19. Making our mVacciNation platform available to all African countries will significantly enhance the continent's digital health infrastructure for the long-term. Our contribution will improve the capability of African countries in this pandemic and beyond for vaccine distribution, management and surveillance, even in resource-constrained settings,’ said Vodacom chief executive Shameel Joosub.

C&C Group has warned its UK alcoholic drinks wholesaler discovered it had been subject to a cyber attack last Friday and that it has hired a forensic IT firm to investigate and restore its systems as quickly as possible.

Matthew Clark Bibendum ‘responded quickly’ and shut down all of its IT systems. The incident has impacted wholesaler Matthew Clark and wine wholesaler Bibendum but ‘has not affected the IT systems of the wider C&C Group, which continue to operate as normal.’

‘A leading forensic information technology firm and legal counsel have been engaged to assist Matthew Clark Bibendum investigate the incident and restore its IT systems as quickly and as safely as possible,’ said C&C.

Matthew Clark Bibendum is manually serving customers and dealing with suppliers until systems are back up and running. The unit is already operating at reduced volumes because of the pandemic.

‘Matthew Clark Bibendum is in the process of informing its customers and suppliers of the incident and the actions the company is taking and has notified the relevant authorities, including the Information Commissioner's Office,’ said the company.

Cybersecurity firm Darktrace has confirmed plans to go public in London with an initial public offering (IPO) that should be large enough to propel the firm into the FTSE 350.

Darktrace said it intends to target the IPO at institutional investors and is planning to float at least 20% of the business. Shares representing up to another 15% of the business could be floated if there is significant demand. Existing shareholders are also expected to sell some of their shares as part of the listing.

The price of the IPO will be determined by a book-building process and won’t be revealed until shares are admitted to trading, which is expected to happen in ‘early May 2021’.

Darktrace plans to use the proceeds from the listing to accelerate product development, boost marketing and to strengthen its balance sheet.