NatWest Group said it sank to sank into the red in 2020 as the pandemic hit and revealed plans to pull out of the Republic of Ireland.

It booked £3.24 billion worth of impairments for bad loans, below the £3.5 billion to £4.0 billion it had originally forecast. Still, the write-offs and severe drop in income caused the bank to sink to an operating loss of £351 million from a £4.23 billion the year before. The loss at the bottom-line and attributable to shareholders was £753 million compared to a £3.13 billion profit in 2019.

‘In comparison to 2019, income across the retail and commercial businesses, excluding notable items, decreased by 10.0% as the lower yield curve, subdued business activity and lower consumer spending were partially offset by strong balance growth,’ NatWest said.

The bank ended the year with a CET1 ratio – a measure of its financial strength – of 18.5%, 230 basis points higher than the year before. NatWest said it was reinstating the dividend with a final payout of 3.0 pence per share.

‘Subject to economic conditions being in line with, or better than, our central economic forecast, NatWest Group intends to maintain ordinary dividends of around 40% of attributable profit and aims to distribute a minimum of £800 million per annum from 2021 to 2023 via a combination of ordinary and special dividends,’ NatWest said.

Separately, the bank said it was starting a ‘phased withdrawal’ from the Republic of Ireland after a review of Ulster Bank revealed it was not in a position to deliver the returns required.

‘Following an extensive review and despite the progress that has been made, it has become clear Ulster Bank will not be able to generate sustainable long terms returns for our shareholders.  As a result, we are to begin a phased withdrawal from the Republic of Ireland over the coming years which will be undertaken with careful consideration of the impact on customers and our colleagues,’ said chief executive Alison Rose.

This will see it sell EUR4 billion worth of commercial loans to Allied Irish Banks, subject to regulatory approval being secured.

It is also in discussion with Permanent TSB Group Holdings and other banks about potential interest in buying certain parts of Ulter Bank’s retail banking and SME business banking units. NatWest said its preference was to ‘focus our discussions with counterparties who can provide customers with full banking services in the Irish market.’

NatWest trades above its 20 and 50 sma on the daily chart. It also trades above an ascending trendline dating back from the late September low indicating an established bullish trend.

The share price has been easing back from its 11-month high of 184 reached earlier this week. This consolidation has brough the RSI out of overbought territory, and it now sits above 50 but below 70 supportive of further upside. The 20 sma also crossed above the 50 sma in another bullish signal.

Immediate resistance can be seen at 173 which is being tested at the time of writing, this level capped the price several times across December. A breakthrough here could see the bulls target 184 (high 17th Feb) before 190 a pre-pandemic level.

Failure to break resistance at 173 could see the price look to retest 167.5 today’s low before eyeing the 50 sma at 161. A weakening of the price below the 50 sma would negate the near-term uptrend and could prompt a deeper selloff. 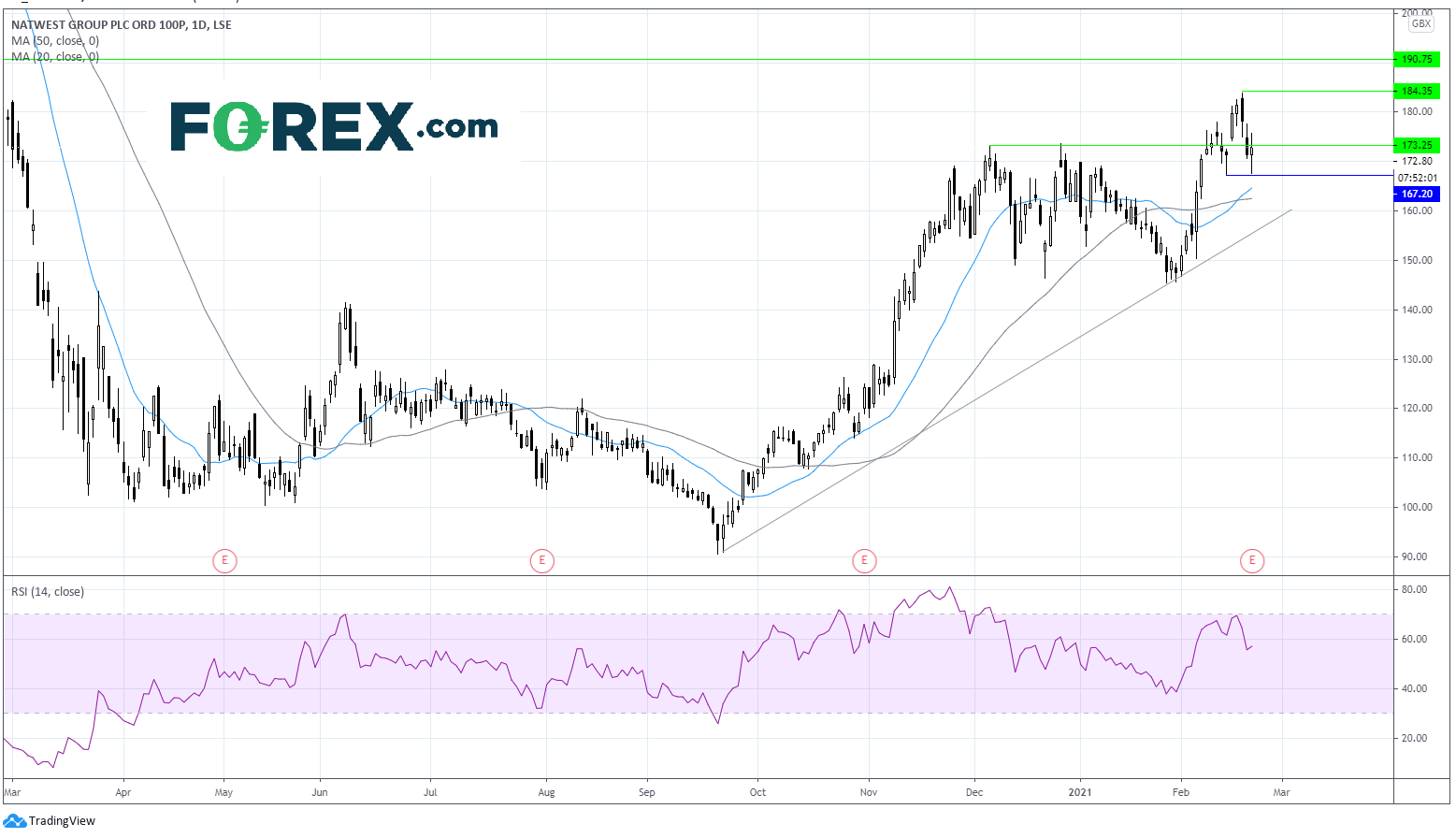 Segro said it has hiked its dividend for 2020 after reporting a surge in profits as demand for warehouses and industrial sites increases during the pandemic, giving it confidence that it can continue to grow over the coming years.

Chief executive David Sleath said the pandemic had ‘reinforced the importance of efficient and resilient distribution networks to facilitate the provision of a wide variety of goods and services, leading to increased demand for warehouse space.’

‘2020 saw a record level of investment for SEGRO as we seek to capitalise on these favourable trends, giving us confidence in our ability to drive further growth in rental income, earnings and dividends over the coming years,’ he added.

Segro made net capital investment of £1.3 billion in 2020 by making acquisitions, developing projects and buying land. It said its buoyant outlook is underpinned by the 1.2 million square metres of space currently under development that, combined, has the potential to bring in another £81 million of potential rent – with around 75% if this already pre-let.

Future to beat expectations with another year of growth

Future said a positive start to its new financial year means it is on course to beat expectations as growth in its media division has more than offset weaker performances from its events and magazines business.

‘The group has continued to benefit from high levels of online engagement in the period, notably during Black Friday and Christmas.  The Media division revenue grew strongly driven by continued momentum in eCommerce and digital advertising,’ Future said. ‘As anticipated, Events, which represent a small portion of the group's revenue, continued to be impacted by COVID-19, while the Magazine division performed in-line with the trends seen from last year,’ Future added.

Future said cash generation remained strong during the four months to the end of January and that it had continued to deleverage the business.

‘As a result of the overall positive start to the year, and despite continued macro-economic uncertainties, the board expects full year profitability to be materially ahead of current market expectations,’ Future said.

Future also said it has completed the acquisition of price comparison firm GoCo Group to represent an entry into financial services. An update will be provided on May 19, it said. Future has also bought Australian price comparison site Mozo for AUD30 million.

‘Price comparison for services is a natural complement in our strategy to enhance and expand our eCommerce proposition and monetisation opportunities beyond product purchase. I am therefore delighted we have now completed the acquisition of GoCo, which we are confident will create substantial value for shareholders,’ said chief executive Zillah Byng-Thorne.

‘Our recent acquisition of Mozo in Australia broadens our price comparison brands to a global reach. This will enhance our proposition, bringing together its leading financial services insight with our expertise in customer acquisition and content creation, and is aligned with our strategy to operate globally. We have already started on the integration of both businesses. On behalf of the entire team at Future, I would like to extend a warm welcome to our new colleagues from GoCo and Mozo,’ he added.

Assura said it has bought Apollo Capital Project Development, a company that has been developing primary care properties for 20 years.

The healthcare property investor did not reveal the price it paid for Apollo, but said the business adds eight schemes to its portfolio that require capital expenditure of around £50 million. Apollo comes with an experienced four-person development team and means Assura now has 11 specialist surveyors on its books.

‘The acquisition of Apollo will further enhance our sector-leading in-house development capabilities and substantially expand our pipeline, which is already the largest in our history,’ said chief executive Jonathan Murphy. ‘Following our acquisition of primary care developer GPI in 2019, this is another important step in our growth story that further deepens our understanding of the future trends shaping the sector, from building design to sustainability.’

‘Expanding our offer to the NHS as its partner of choice has never been more vital than it is today. As Apollo's colleagues integrate into Assura, we look forward to working together to continue creating outstanding spaces for health services in our communities,’ he added.

City of London Investment Trust said it lagged its benchmark index during the first half of its financial year after being under-exposed in some stocks that recovered quickly during the period and over-exposed to ones that underperformed.

The trust said it delivered a net asset value return of 6.9% in the six months to the end of December.

‘The biggest detracting sector was not holding equity investment instruments, especially Scottish Mortgage, followed by being underweight in travel & leisure, including not holding Flutter Entertainment,’ the trust said.

It also said its above-average exposure to gas, water and multi-utilities didn’t help and that some of its defensive holdings like Nestle, Verizon and RELX underperformed.

City of London recommitted to its dividend and has declared two interim dividends of 4.75p each in the first half, despite suffering a severe drop in income as dividends from its investment plunged last year during the pandemic. However, the trust has continued to pay shareholders and said it was optimistic that more companies were returning to payouts after stocks like BAE, Persimmon and Direct Line recently reinstated them.

City of London shares were trading flat in early trade at 358.5.

The facility will last for seven years and is priced at 2.75% above a fixed rate set by reference to the LIBOR swap rate. It is secured against a portfolio of specialist supported living properties.

‘The facility is designed to support the company's continuing growth plans and Civitas intends to utilise the proceeds of the facility during 2021 to enable the purchase of high-quality properties that form part of the pipeline of new transactions.  This in turn is expected to further enhance both rental income and in due course dividend cover,’ said Civitas.