Reckitt Benckiser said record growth in revenue and a lack of impairments saw it to return to profit in 2020, allowing it to pay down debt and maintain its dividend for the year.

The company, known for brands like Dettol disinfectant, Nurofen painkillers and Durex condoms, said net revenue jumped to £13.99 billion in 2020 from £12.84 billion the year before as demand for hygiene products increased during the pandemic. Hygiene sales jumped 15.6%, health product sales rose 9.6% and nutritional products dropped 2%.

The 11.8% like-for-like growth is the strongest delivered since the company was formed in 1999, when Reckitt & Colman and Benckiser merged.

It reported an operating profit of £2.16 billion from a £1.95 billion loss in 2019, when it booked over £5 billion worth of impairments mostly relating to its Infant Formula and Child Nutrition unit. The lack of charges allowed it to report a pretax profit of £1.87 billion compared to a £2.10 billion loss the year before.

Reckitt Benckiser said like-for-like revenue growth will remain flat to up 2% in 2021 while its adjusted operating margin will remain ‘broadly unchanged’. That implies the stellar growth delivered last year is not expected to continue in 2021.

It also said it now expects to deliver £1.6 billion worth of productivity savings by 2022, up from its previous target of £1.3 billion.

‘This past year we delivered a strong revenue performance with nearly £14bn of sales and 11.8% like-for-like growth. eCommerce sales grew by a record 56% and now account for around 12% of group net revenue.  We have made a strong start to implementing our new strategy and proved that we can adapt and successfully respond to rapidly changing market conditions. Our portfolio is clearly resilient - with or without COVID-19 - and we are building a stronger business for the future,’ said chief executive Laxman Narasimhan.

‘2020 was a turning point for Reckitt Benckiser. Our performance is strong, we are building capability, actively managing our portfolio and transforming our culture. We expect 2021 to be a year of further strategic progress and we remain confident that we will meet our medium-term targets,’ he added.

Separately, Reckitt Benckiser said it has agreed to buy the Biofreeze brand from a company owned by Madison Dearborn Partners. Biofreeze is the ‘number one clinically recommended topical pain relief brand, and has delivered robust double-digit sales growth,’ the company said. It has also agreed to sell its Scholl brand to Yellow Wood Partners and that it hopes to close the deal in the third quarter of 2021.

Reckitt Benckiser shares trade below the descending trendline dating back to July last year. It also trades below its downward sloping 20 & 50 sma on the daily chart indicating a bearish trend. The RSI is also in bearish territory.

Today’s 3% jump has seen the price rebound off yesterday’s 11 month low of 5780. However, the bulls will need to overcome resistance at 6180 the20 sma in order to push the price higher to 6390 the 50 sma and February’s high. A move above 6470 the descending trend line could negate the current bearish trend.

Failure to close above 6180 could see the bears extend losses beyond yesterday’s low of 5780 to 5550 a level last seen in mid-March. 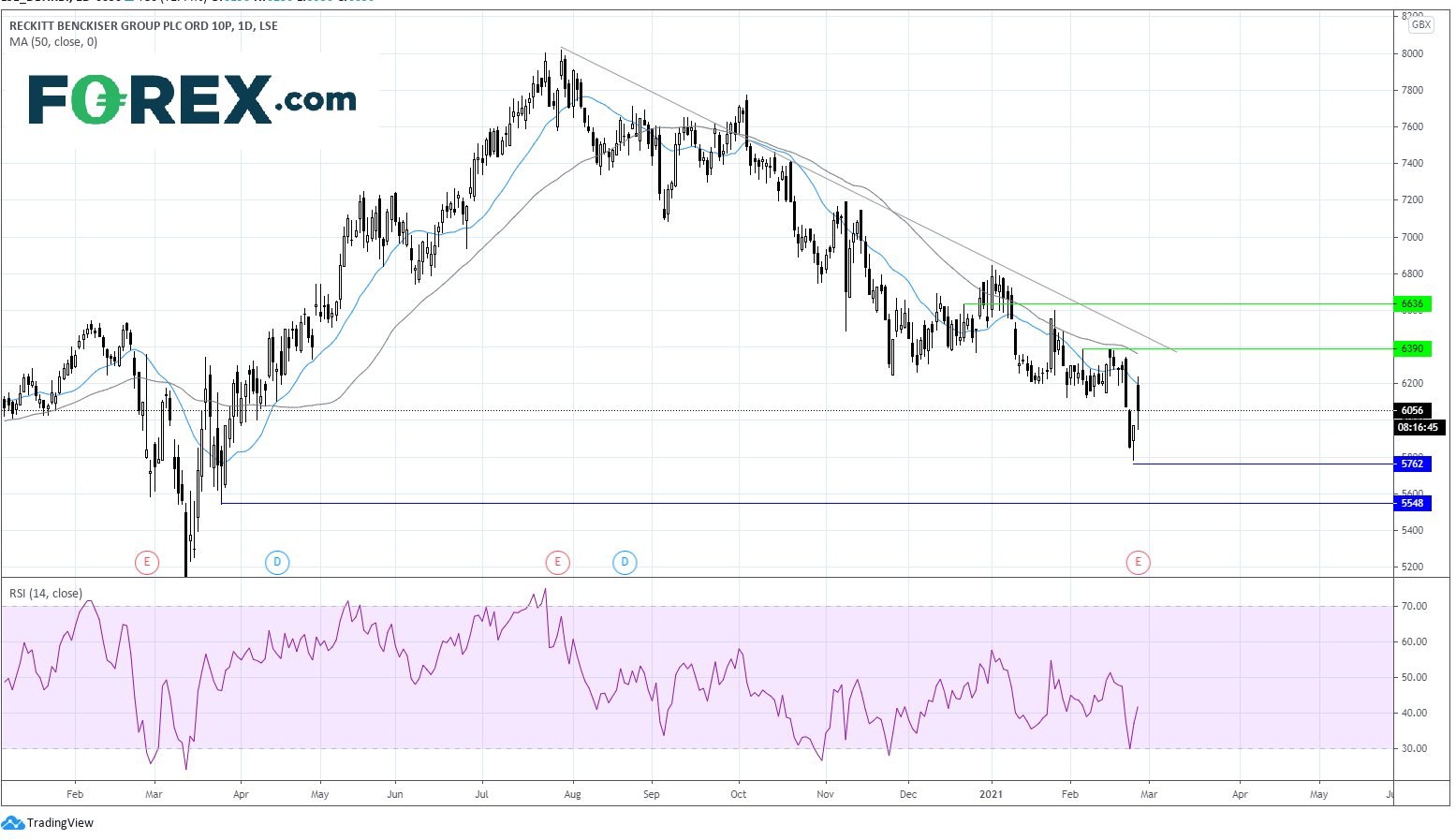 Lloyds Banking Group said it is paying the largest dividend it can under guidelines provided by the banking regulator despite profits plunging during a tough 2020, and said it is aiming to significantly improve profitability this year.

Profits were hit by a £4.2 billion impairment for bad loans, most of which were booked in the first half as a result of the deterioration in the economy during the pandemic.

‘Despite the significant impairment charge taken in the year, predominantly in the first half, the group has delivered a statutory profit after tax of £1.4 billion. Further, the group's strong capital position has also enabled us to resume capital distributions with a dividend of 0.57 pence per share,’ said chief executive Antonio Horta-Osorio.

Lloyds said the dividend was the maximum it was able to pay according to guidelines issued by the regulator, which had banned UK banks from distributing dividends when the pandemic erupted before allowing them to be reinstated late last year. Lloyds said it intends to ‘accrue dividends and resume [a] progressive and sustainable ordinary dividend policy’.

‘The group's unique business model, customer focused strategy and transformation in recent years positioned us well to respond effectively to the needs of our customers in 2020. At the same time, the group's financial performance in the year has been impacted by the pandemic. We are now seeing positive developments in the business, including growth of £10.2 billion in the open mortgage book in the second half of the year and total deposits up £39 billion in the year, the latter given curtailed retail spending and inflows to our trusted brands,’ said the Lloyd’s CEO.

Lloyds said loans and advances were broadly flat in 2020 as increases in the open book mortgages and government-backed lending offset lower balances from the retail, corporate and institutional divisions, as well as its closed mortgage book.

It is also aiming to significantly improve profitability this year by targeting a statutory return on tangible equity of between 5% to 7% from just 2.3% in 2020, having plunged from 6.6% in 2019.

Lloyds also confirmed that Charlie Nunn is set to take over as its new chief executive and replace Horta-Osorio on August 16.

Vodafone has confirmed that it intends to spin-off Vantage Towers by conducting an initial public offering (IPO) on the Frankfurt Stock Exchange before the end of March.

Vantage Towers holds tower infrastructure assets across Europe and is the largest or second-largest player in nine out of its 10 markets. Vodafone is planning on offering a ‘meaningful minority free float’ and hopes the IPO can propel Vantage’s growth as it deploys the infrastructure needed to unleash 5G across the continent.

‘The IPO is an important milestone and sets the foundations for the next stage of our growth within the dynamic towers industry. We will be looking to capture the exciting value-creating opportunities the sector has to offer and to build on our position as a leading tower infrastructure company in Europe,’ said Vivek Badrinath, chief executive of Vantage Towers.

‘With our superior grid, inflation-linked revenue - secured for the long term - and our strong balance sheet, we have a powerful base to move forward and support our customers' need for better and more extensive connectivity across the continent,’ he added.

Cyber security firm Avast has formed a partnership with PMovil, one of the leading direct carrier billing and alternative payment companies in Latin America.

The partnership will see Avast’s subscription-based solutions be made available to PMovil’s 400 million customers around the world, many of which rely on paying for things using their phone and other methods because they lack access to traditional banking products like credit or debt cards.

Aviva said it has agreed to sell its 40% stake in its joint venture in Turkey for £122 million, marking its exit from the country.

Aviva has sold its stake in AvivaSA Emeklilik ve Hayat to Ageas Insurance International, which will now work with the other member of the venture, Sabanci Holding. The deal is expected to be completed this year once regulatory approvals have been secured.

Chemicals company Synthomer has denied reports that it is in talks about an offer for the business after Bloomberg reported CVC Capital had made an initial approach to test the appetite for a $3 billion takeover.

‘Following press speculation, the board of Synthomer plc confirms it is not in discussions regarding a possible offer for the company,’ Synthomer said in a short statement.

The first deal has seen the company purchase a 50% stake in the Braes of Doune wind farm for £48.1 million from funds managed by Federated Hermes. Greencoat already owned the other 50%, meaning it now fully owns the asset. The wind farm is located in Stirlingshire and has total capacity of 72MW from 36 2MW turbines.

Greencoat has also bought a 49.9% stake in the Kype Muir Extension wind farm for £51.4 million from its owner Banks Renewable, which it will now work with going forward. Notably, the payment will not be due until the wind farm is fully commissioned, which it hopes will happen in the fourth quarter of 2022. Greencoat will also supply construction finance of up to £47 million, which should start to be utilised in July 2021.

The project is an extension to the Kype Muir wind farm in South Lanarkshire and will have total capacity of 62.7MW from 4 3.6MW turbines and 11 4.8MW turbines. It will operate under a 15-year fixed-price contract once operational.