Tesco said sales boomed during the pandemic as stores remained open and online shopping took off, but revealed profits took a hit as it booked one-off costs adapting to the challenging environment and dragged down further by the repayment of government support.

Revenue in the year rose over 7% to £53.4 billion from £49.9 billion. Tesco said the UK had performed particularly well during the year after it gained market share and poached customers from ‘all key competitors’, whilst online sales jumped 77%. It is now offering 1.5 million delivery slots a week.

Overall adjusted operating profit came in at £1.81 billion, just shy of analyst expectations for £1.85 billion. Reported pretax profit fell to £825 million from £1.02 billion and was considerably less than the £1.17 billion predicted by analysts.

Tesco will pay a dividend of 9.15 pence for the year, having maintained the payout from the previous year.

The company said it is ‘well set’ for the current financial year and that it expects to report a ‘strong improvement’ in profitability despite the fact trading is likely to remain uncertain as the country comes out of lockdown.

‘While the pandemic is not yet over, we're well-placed to build on the momentum in our business.  We have strengthened our brand, increased customer satisfaction and improved value perception.  We have doubled the size of our online business and through Clubcard, we're building a digital customer platform,’ said chief executive Ken Murphy.

‘Our decision to protect and hold the dividend flat for this financial year demonstrates our commitment to shareholders.  We believe we can create significant further value for them and every stakeholder in our business by continuing to focus on value, loyalty and convenience for customers, underpinned by strong capital discipline,’ he added.

Tesco has fallen through its ascending trendline which dates back to the beginning of March.

The price has also fallen through the 50 & 200 EMA in a bearish signal. The RSI has also fallen firmly into bearish territory but remains above the oversold mark of 30 suggesting that there could be more down side to come.

Tesco share price trades -3.6% at the time of writing and is trading at the low of the day at 223. Support can be seen at 220 the low February 23 before 217 the yearly low. A break below this level could open the door to a deeper selloff towards 212.

On the flip side, strong resistance can be seen at 230, this is the confluence of the 50 and 200 EMA and the ascending trendline support turned resistance. This could be a tough nut to crack but needs to be retaken to resume the upward trend. 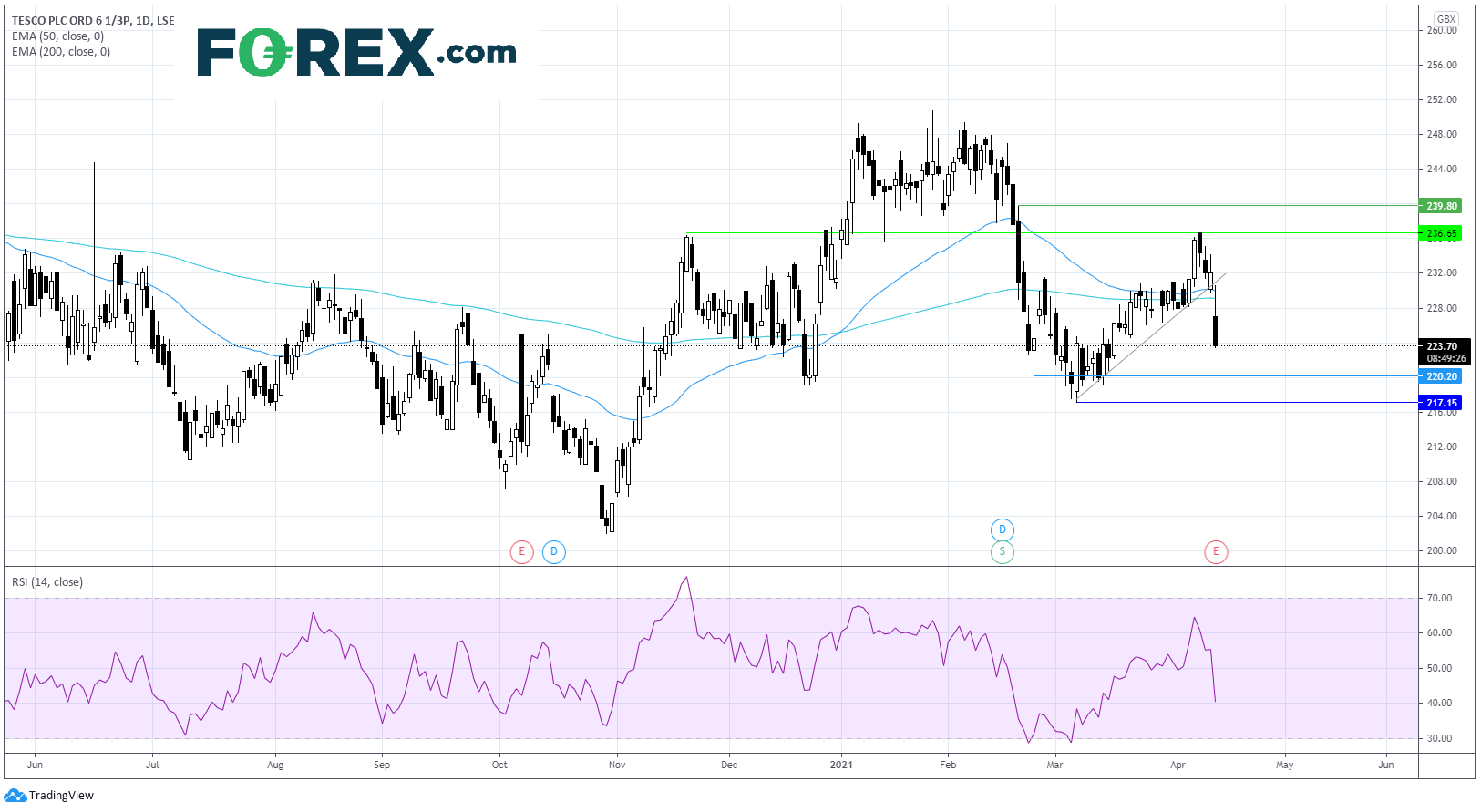 EasyJet ready to ‘ramp up’ for summer holidays

Low-cost airline easyJet has said it is ‘encouraged’ by how quickly the UK is rolling-out its coronavirus vaccine and believes Europe will pick up the pace to allow people to go on holiday again as it reported better-than-expected results in the first half of its financial year.

The airline carried 89% fewer passengers in the six months to the end of March 2021 than the year before as the pandemic and lockdown restrictions limited travel. As a result, ticket revenue fell 91% to £165 million while ancillary revenue, made from flogging extras, dropped 87% to £70 million.

It expects to book a headline loss before tax of between £690 million to £730 million in the first half, slightly better than what is forecast by analysts.

The company warned it burnt through £470 million in cash during the second quarter, slightly better than the £480 million it lost in the first. EasyJet has £2.9 billion of liquidity after raising £5.5 billion of extra funds since the start of the pandemic, which should be enough to keep it afloat until the travel industry takes off again.

‘The effects of the cost-out programme will support improved margins and reduce seasonality for the future.  Our capacity forecasting has been accurate and disciplined throughout the pandemic, which has allowed for strong cost control.  Our focus on cash generative flying over the winter season has minimised cash burn, with cash burn in the second quarter better than guidance,’ said the airline.

EasyJet said it expects to be operating at 20% of the prior year’s capacity in the third quarter of the financial year, up from 14% in the second, with hopes that capacity can steadily increase from May onwards.

‘We welcome the confirmation by the UK government that international travel is on track to reopen as planned in mid-May,’ said chief executive Johan Lundgren.

‘We continue to closely monitor the situation across Europe and with vaccination programmes accelerating, most countries are planning to resume flying at scale in May.  We have the operational flexibility to rapidly increase flying and add destinations to match demand.  easyJet is ready to resume flying, prepared for the ramp up and looking forward to being able to reunite people with their families or take them on leisure and business flights once again.  As a result, we remain well-positioned for the recovery this summer and beyond,’ said the CEO.

The company will release its interim results on May 20.

The UK’s Competition & Markets Authority (CMA) has provisionally approved the proposed £31 billion merger of Virgin Media and Virgin Mobile with O2, stating it won’t lead to higher prices or a poorer service.

The regulator was investigating whether the combination would negatively impact the wholesale telecoms market, with Virgin supplying leased lines to the likes of Vodafone and Three while O2’s network is used by other providers like Sky. The CMA was not concerned with the retail market because Virgin Mobile is a relatively small player in the market.

‘Given the impact this deal could have in the UK, we needed to scrutinise this merger closely,’ said Martin Coleman, chair of the CMA panel that conducted the inquiry.

‘A thorough analysis of the evidence gathered during our phase 2 investigation has shown that the deal is unlikely to lead to higher prices or a reduced quality of mobile services – meaning customers should continue to benefit from strong competition,’ he added.

Virgin is owned by Liberty Global while O2 is part of Telefonica. The two companies said they expect to close the deal in the middle of this year.

Foxtons reports strong growth across the board in early 2021

Foxtons Group said it enjoyed the ‘best first quarter’s trading in some time’ during the first three months of 2021, driven by strong organic growth and a boost from its largest acquisition ever, leading it to raise expectations.

The London estate agent bought Douglas & Gordon during the period and the unit has contributed £1 million worth of lettings and £800,000 of sales since being acquired. ‘The acquisition of Douglas & Gordon, the largest acquisition in our history, represents an acceleration of the group's strategy and is a business with significant potential,’ said chief executive Nic Budden.

Foxtons also decided to invest £3 million into another company named Boomin after the end of the quarter. Boomin is an online property site helping people rent and buy that also acts as a Pinterest-style platform helping people find inspiration on décor and style.

‘As we look forward, the strong trading momentum is expected to continue through the second quarter and together with tight cost control gives us confidence that operating profit for the first half will be significantly higher than last year,’ said Budden.

Anglo Pacific Group said its portfolio was hard-hit by the fall in commodity prices last year, pushing it into the red, as it unveiled a new dividend policy for shareholders to get their heads around.

The company, which invests in mining companies and projects to generate royalties and income streams, said the majority of its operations were unaffected by the coronavirus pandemic during 2020 but said the steep fall in commodity prices hit income. Its portfolio generated just £37 million during the year, down from £59.5 million the year before.

Still, Anglo Pacific Group said it was maintaining its dividend for the year at 9.0 pence per share. However, it said it will approach payouts differently going forward by paying a 1.75p quarterly dividend and deciding the amount of the final payout based on the year’s performance.

Anglo Pacific Group said it is positive about the immediate future on hopes commodity prices will find support as government’s look to build back better from the pandemic. The addition of the Voisey Bay mine in Canada, which was recently acquired for $205 million, should also make a notable impact this year.

‘Anglo Pacific is a very different business to what I reported on this time twelve months ago. We have, with the Voisey's Bay cobalt stream acquisition, fundamentally repositioned our portfolio towards materials vital in providing cleaner energy for the future whilst ensuring that the Group replaces its Kestrel revenue ahead of time. This is immediately evident on our balance sheet where these materials now account for over 60% of our royalty and streaming assets,’ said chief executive Julian Treger.