THG, also known as The Hut Group, has raised over $1 billion by issuing new shares in the business in order to bolster its cash as it hunts for more businesses to acquire this year after unveiling a major new partnership with Japanese giant SoftBank yesterday.

The company, which runs a digital platform allowing beauty and cosmetic brands to sell online, said it has issued 124.7 million shares for 596 pence each, level with its share price before the fundraising was announced, to raise $1.05 billion. The new shares represent a 10% stake in the company before the equity raise was completed.

SB Management, a subsidiary of SoftBank, invested $730 million after signing an option and collaboration agreement with THG to underpin a new relationship that will see the two companies explore potential commercial opportunities together.

This will see SoftBank invest an additional $1.6 billion into a new company named THG Ingenuity, which is yet to be formed. The new company will still be controlled by The Hut Group and comprise ‘the Ingenuity platform IP and operating trade and assets’. The Ingenuity platform is described as the ‘enabler of THG’s global direct-to-consumer growth’ on the company’s website and is the key element to its operations.

SB Management will own 19.99% stake of the new business once the investment is made, valuing it at an enterprise value of $6.3 billion.

The funds raised from the placing and subscription will be used to fund acquisitions this year. THG announced yesterday that it has agreed to buy a beauty products developer and manufacturer in the US called Bentley Laboratories for $255 million, which it expects to contribute $77 million in revenue and $15 million in adjusted Ebitda during the 2022 financial year.

Where next for THG shares?

The THG share price has been trending lower since the turn of the year, falling from its all time high of 838p to a low of 565p.

Today’s 18% jump higher has seen the share price break above its 50 & 100 sma on the daily chart as well as its multi-month ascending trendline.

The RSI has shot into overbought territory so some consolidation at these levels could be expected or even an easing lower before further gains.

Immediate resistance cane be seen at 717p the April high, ahead of 730p the March high.

It would take a fall below 660p to negate the new uptrend and for the sellers to gain traction towards support at 640p zone which sees the confluence of the 50, 100 SMA & the descending trendline. 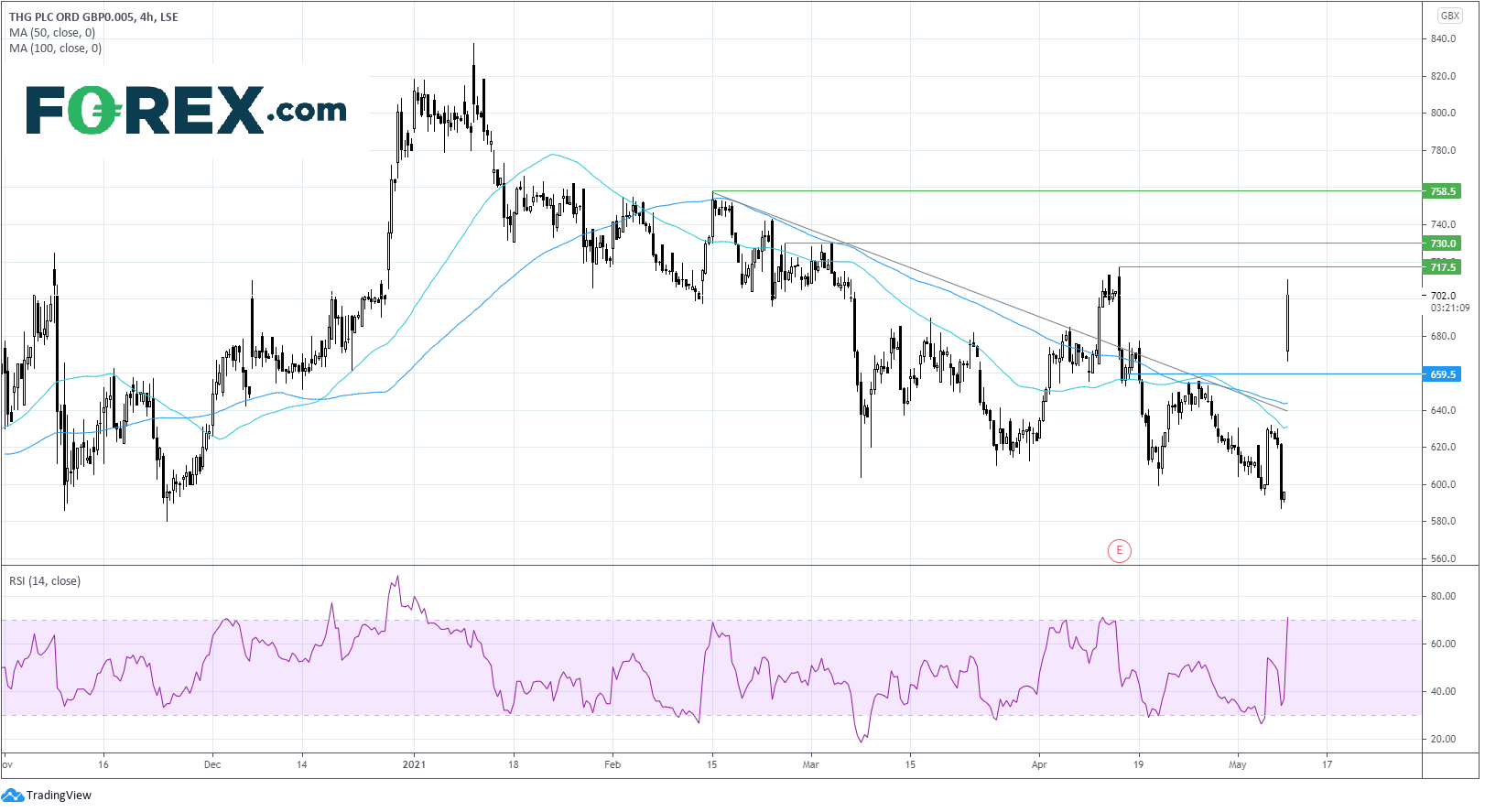 Morrisons said it has made a good start to its new financial year as extra costs that arose whilst adapting to the pandemic began to unwind and demand for the likes of fuel and food-on-the-go started to recover, prompting it to paint a rosier outlook.

The supermarket chain said total sales were up 5.3% in the 14 weeks to May 9, representing its first-quarter. Like-for-like sales were up 4.7% when fuel sales were included and up 2.7% when excluded. Online sales continued to perform well by more than doubling year-on-year, while its wholesale division saw like-for-likes rise 21%.

‘Against the volatile trading of the early stages of COVID-19 last year, we sustained a robust sales performance throughout Q1 this year, especially as all but the first four weeks of the period lapped the early stages of the pandemic during March and April 2020. Key seasonal events such as Mother's Day and Easter were particularly successful, and there has been a strong recent improvement in food-to-go sales,’ Morrisons said.

Morrisons said the amount of money it has having to spend adapting the pandemic, such as covering higher levels of staff sickness, is starting to fall. Still, it booked £27 million worth of Covid-costs in the quarter.

The company said the recovery in fuel sales and the decline in Covid-costs had improved the outlook for cashflow, which in turn will allow it to reduce debt faster than planned.

Morrisons reiterated its guidance for the full year that it will deliver a pretax profit before exceptional items of around £435 million. That would be higher than the £431 million delivered in the last financial year before the repayment of £230 million worth of business rates relief. The outlook for the 2022/23 financial year has improved, with Morrisons now expecting to deliver ‘meaningful profit growth’ on expectations that sales will fully recover across the business and no additional costs will have to be booked because of the pandemic.

‘The pandemic is not yet over, but it is in retreat across Britain and there is much to be positive about as something approaching normal life begins to take shape. Our forecourts are getting busier, we are seeing encouraging recent signs of a strong rebound of food-to-go, take-away counters and salad bars, and our popular cafés will soon fully reopen. The nation has a summer of socialising and sport to look forward to and we'll all be able to rediscover the joys of meeting up and eating well together. Whichever way consumers choose to enjoy their renewed freedom, we will be there for them,’ said chief executive David Potts.

Morrisons shares were trading 1.2% higher in early trade this morning at 184.8.

The UK Treasury has sold a chunk of its shareholding in NatWest Group for a total of £1.1 billion.

UK taxpayers have owned a controlling stake in the bank since it was bailed out in the 2008 financial crisis, when the bank was still known as the Royal Bank of Scotland. The government paid 502 pence per share at the time.

The Treasury said late yesterday that it has sold around 580 million of its shares for 190 pence each. This leaves it with 6.33 billion shares in NatWest, representing a 54.8% stake.

It follows on from NatWest buying back around 591 million shares from the government for £1.1 billion back in March. The most recent sale comes as UK government debt reaches record levels during the pandemic. Although the price is way below what was originally paid, NatWest shares have doubled in value since hitting lows last September.

IAG raises EUR800 million to help it survive the pandemic

International Consolidated Airlines, the owner of airlines including British Airways, Iberia and Vueling, is raising EUR800 million by issuing convertible bonds to help shore up its balance sheet as it tries to survive until international travel picks up again.

The bonds will carry a fixed interest rate and will mature in 2028.

IAG said the proceeds would be used to increase liquidity and improve its flexibility as it waits for the global economy to reopen and for international travel to resume.

Like the wider airline industry, IAG has had to scramble for billions over the last year to survive the pandemic. The company has tapped investors through a EUR2.7 billion rights issue, secured EUR2.2 billion in loans backed by the UK government, EUR2.0 billion through a UK Export Finance loan, EUR1.2 billion in bonds and EUR2.6 billion in refinancing its aircraft.

Helios Towers has struck a deal with the largest mobile network in Oman to buy its portfolio of tower infrastructure across the country for $575 million, representing the London-listed company’s entry into the Middle East.

The company, which invests in infrastructure needed to run mobile networks, has agreed to buy the portfolio of 2,890 sites from Oman Telecommunications Co, also known as Omantel. The deal represents an enterprise value of $615 million when transactions costs and capitalised ground leases are taken into account.

Helios Towers said the deal will mark its entry into the Middle East, representing the eleventh market it has entered. The new portfolio of towers is expected to generate $59 million in revenue and earnings before interest, tax, depreciation and amortisation of $40 million in its first full year of operations. The company sees an opportunity to grow the business going forward by adding new sites over the next seven years.

‘We are delighted to announce the creation of our long-term partnership with Omantel through this transaction. We look forward to supporting Omantel's growth, and that of the wider Omani mobile market, through our delivery of customer service excellence and world-class infrastructure solutions and services,’ said chief executive Kash Pandya.

The deal should be completed by the end of 2021. Regulators in Oman will need to approve the deal, as will Helios shareholders. However, Helios said it had already secured irrevocable undertakings from investors with a combined stake of over 50% to support the deal.

Notably, the acquisition will mean Helios will achieve its ambition of having over 12,000 towers in total across its entire portfolio is now ‘well ahead of plan’.