Top News: Wetherspoons wary over roadmap out of lockdown

Wetherspoons has cast doubt over whether the government will stick to its reopening plan as it heavily criticised the UK’s approach to lockdown as it revealed it sank to record losses during the first half of its financial year.

The company did not provide any firm guidance or outlook, stating it is ‘impossible to decipher a pattern in sales, given the lockdowns and changes in regulations.’

Pubs are expected to reopen beer gardens and outdoor spaces on April 12, with Wetherspoons preparing to open around half of its estate, but the company is cautious about the dates laid out in the government’s roadmap out of lockdown. They are due to be allowed to offer table service indoors from May before being allowed to fully reopen in June.

‘It remains to be seen whether the government will adhere to its reopening plan, following the successful vaccination programme - or whether the knee-jerk reaction to the latest news, which seems to have been the main generator of policy and regulations, will continue,’ said Wetherspoons.

Revenue plunged to £431.1 million in the 26 weeks to January 24 from £933.0 million the year before, with like-for-like sales also more than halving.  Wetherspoons sank to a pretax loss of £59.3 million from a £42 million profit.

The company and its chairman Tim Martin have been highly critical of the government’s approach to the pandemic and how the hospitality industry has been treated. It said the future of the industry ‘depends on a consistent set of sensible policies, and the ending of lockdowns and tier systems, which have created economic and social mayhem and colossal debts, with no apparent health benefits.’

Wetherspoons has not had a single outbreak reported in any of its pubs whilst they have been open during the pandemic.

JD Wetherspoons has dropped 1.5% in early trade testing confluence support of its ascending trendline dating back to early November and the 20 sma at 1300. Whilst these hold the bias remains bullish.

A meaningful move below this support could see seller look towards the 50 sma at 1240. A close below the 50 sma could negate the current uptrend and see the bearish move gain momentum towards 1110.

Should the ascending trendline support hold then the recovery would need to overcome resistance at 1400 the weekly high before the bulls could contemplate a move towards the pre-pandemic level of 1600. 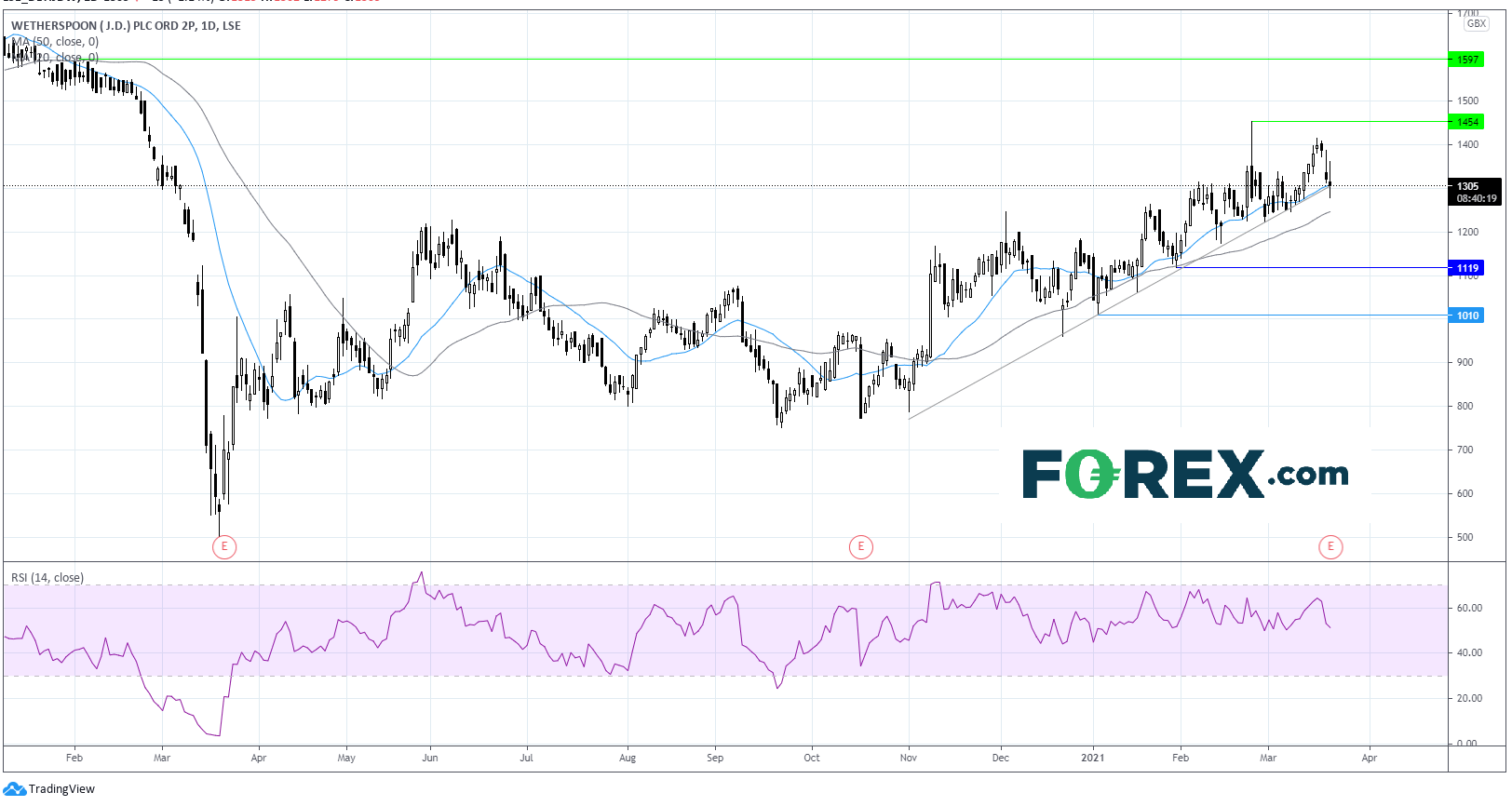 UK government sells £1.1 billion worth of shares in NatWest

The UK government has raised £1.1 billion by selling shares in NatWest that were bought when taxpayer’s money was used to bail out the bank during the financial crisis.

The UK government’s 61.7% stake in the bank, which was called Royal Bank of Scotland until last year, has now fallen to 59.77% after it sold 590.7 million shares for 190.50 pence each. That leaves the taxpayer with 6.91 billion shares in NatWest.

That is starkly lower than the price the government paid per share during the bail out, which was closer to 440p when the payments received so far are deducted. The shares have been purchased by NatWest and cancelled, apart from 200 million which will be held in the company’s treasury to give it flexibility to cancel or re-issue them in the future as needed.

CMA cracks down on Taylor Wimpey and Countryside

The UK’s Competition & Markets Authority (CMA) has ordered Taylor Wimpey and Countryside to remove terms that has seen leaseholder’s ground rent double every 10 to 15 years.

The CMA launched an investigation into leaseholds last September that examined whether the terms applying to ground rents were unfair.

‘The CMA has now written to Countryside and Taylor Wimpey outlining its specific concerns that their use of terms that double the ground rent every 10 or 15 years breaks consumer protection law,’ said the CMA.

The CMA is forcing the pair to remove the ground rent terms ‘from all existing contracts’ to make sure they no longer breach the law. They will also not be allowed to include these terms in any future contracts.

‘These ground rent terms can make it impossible for people to sell or get a mortgage on their homes, meaning they find themselves trapped. This is unacceptable. Countryside and Taylor Wimpey must entirely remove all these terms from existing contracts to make sure that they are on the right side of the law,’ the CMA said.

‘If these developers do not address our concerns, we will take further action, including through the courts, if necessary,’ the CMA added.

Notably, a separate investigation into Persimmon and Barratt Developments, which are accused of mis-selling leasehold homes, is still ongoing.

Halfords has agreed to buy Universal Tyre and Autocentres for £15 million to bolster its motoring services business.

Universal Tyres and Autocentres has 20 garages and 89 commercial vans operating across the South East of England. The company provides general motoring services like MOTs and servicing, and specialises in supplying and fitting tyres for all types of vehicles from cars to agricultural vehicles.

Halfords said £9 million is being paid for the company’s real estate and net cash and £6 million for the underlying trading business. Universal Tyres and Autocentres generated around £31 million in revenue and £1.5 million of Earnings before interest, tax, depreciation and amortisation in 2020.

The acquisition is part of an ambition to have over 550 garages in the UK and to build its capability to serve the commercial truck and van market. Halfords said it will have 374 garages following the acquisition. These are in addition to its 404 retail stores and suite of vans providing services on the move.

‘We have a clearly stated strategy of building a market-leading Motoring Services offer, and the acquisition of Universal is another important step forward in helping us to achieve that goal. We continue to see strong demand for our Autocentres, for our expanding fleet of Halfords Mobile Expert vans, and for our growing commercial business. Universal will help us to meet that demand whilst also expanding our geographic footprint in a market for which we see significant potential,’ said chief executive Graham Stapleton.

Sanne Group said it expects to return to double-digit organic revenue growth in 2021 after delivering a resilient performance despite the pandemic last year.

‘Sanne has delivered a robust financial performance in 2020 and continued to make progress against our strategic priorities. We have further enhanced our offering to clients through the rollout of new products and investment in technology, in addition to broadening our global footprint and capabilities with five acquisitions,’ said chief executive Martin Schnaier.

‘Looking ahead, whilst the COVID-19 pandemic remains ongoing, we are encouraged by the positive trends we have seen in recent months. The long-term prospects for the alternative assets industry remain highly attractive and the strong platform we have built means that Sanne is ideally positioned as markets improve,’ Schnaier added.

Sanne said the signs of market progress seen in the final quarter of 2020 had continued in 2021, with a catch-up in delayed fund closings and an increase in new business wins.