Us open: A softer start on profit taking, Disney impresses

US indices are heading for a softer start but are still on track for weekly gains as stimulus optimism and a fast vaccine rollout programme underpin demand. Disney is set to jump after stellar streaming numbers and oil extends its selloff on weaker demand outlook reports.

The Biden administration’s $1.9 trillion covid stimulus package remains in full focus. A House Committee approved a proposal to give troubled airlines a further $14 billion as part of the package.

The Democrats proposal of $15 minimum wage will also appear in the final draft of the stimulus package bill, to be debated.

If this proposal is passed it could have a significant impact on business costs, unemployment and consumer spending.

The US announced that it has purchased an additional 100 million doses of the covid vaccine from each Pfizer and Moderna. According to Anthony Fauci, the leading infectious disease doctor, the US should then have enough doses by April for anyone in America who wants a vaccine shot to have one.

The speedy rollout of the covid vaccine means a more rapid economic recovery and should lend support to risk sentiment.

After another record hitting session on Wall Street which saw a spectacular IPO by Bumble, markets are showing signs of losing momentum today as they head towards the weekend.

Even so, benchmark indices are on track to post mild gains across the week. On a month to date basis the S&P trades over 5% higher whilst the Nasdaq has booked 7% gains marking the strongest month since November.

Disney is gaining ground pre-market, up 1.5% at a record high after smashing expectations in its Q1 earnings. Disney reported EPS 32c vs a loss of 41c expected. Revenue came in at $16.25 billion vs $15.9 billion expected. Disney’s streaming channel Disney pls added an impressive 8 million new subscribers in Q4 taking total paid subscribers to 95 million. These upbeat numbers overshadowed further weakness from the theme parks where revenue decline -53% to $3.58 billion as parks were either closed or operating at reduced capacity. 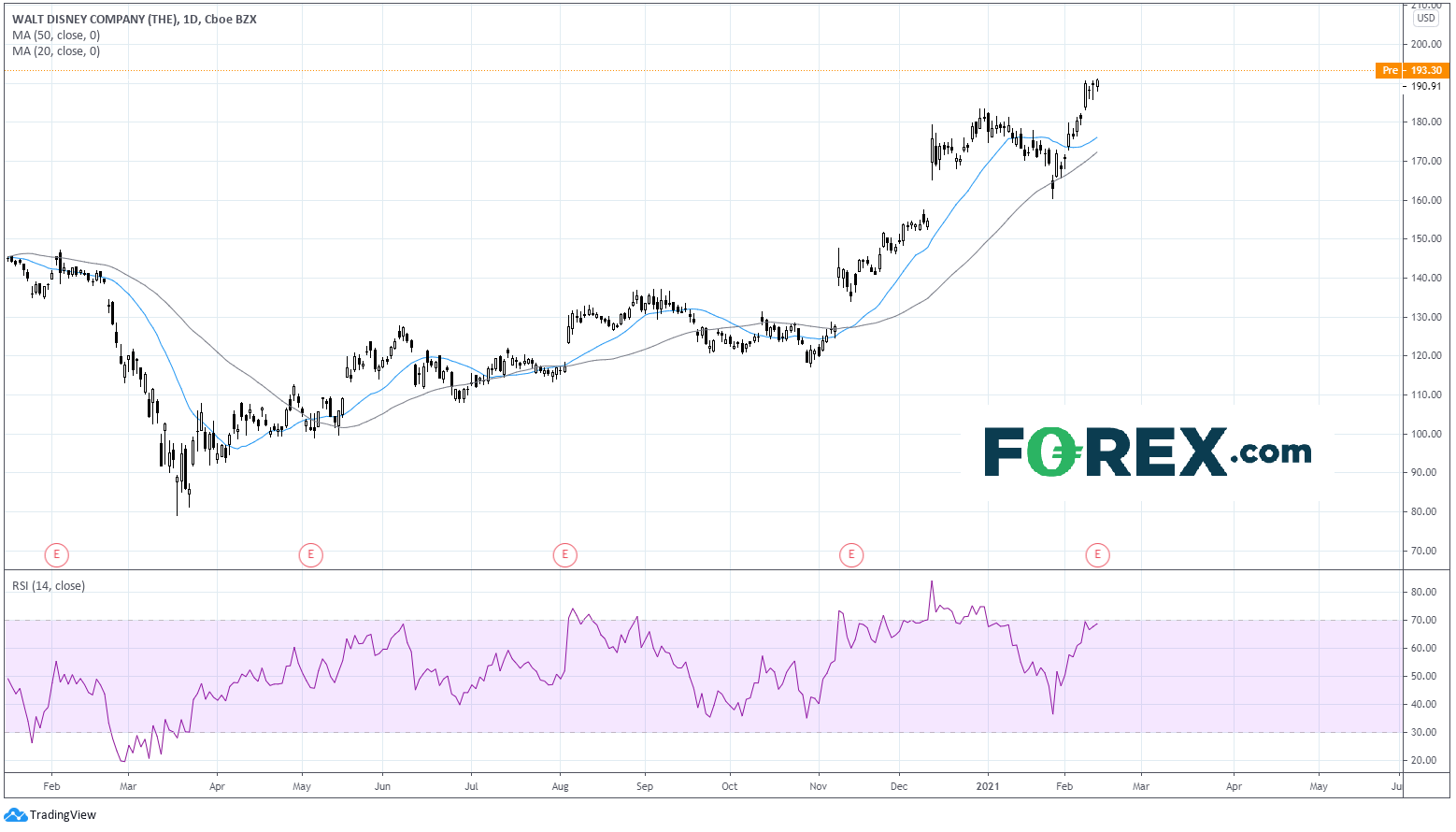 After a strong start to the week, oil slipped 0.75% in the previous session is extending that selloff for a second session. Better than forecast inventory data, optimism surrounding the US stimulus package and OPEC compliance with output cuts have supported the price early in the week. However, the International Energy Agency and the Organisation for Petroleum Exporting Countries both cut their forecasts for global oil consumption this year due to lockdowns particularly in Europe.

The US Dollar is heading higher today but is set for losses across the week after two straight weeks of gains. The softer US Dollar comes following weaker than forecast US jobless claims. Initial claims rose to 793k versus 757k expected. The previous weeks’ numbers were also revised steeply higher to 812k raising concerns over that the US labour market recovery has stalled.

US consumer confidence data will be in focus later today. The preliminary figures for February are expected to show a slight increase in morale to 80.8 vs 79 in January.