US open: Wall Street points to a mixed start as retail sales disappoint


US retail sales worse than expected

Retail sales fell faster than expected in part owing to the harsh weather conditions in the US last month and following January's jump in sales thanks to the stimulus checks received.

Attention will now turn to the Federal Reserve monetary policy announcement tomorrow. The Fed are expected to keep policy on hold and remain accommodative. Growth and inflation forecasts are expected to be revised higher.

Learn more about the Fed

US equities are set to open mixed and trade in a narrow range as investors look ahead to tomorrow’s Federal Reserve monetary.

Investors are pausing for breath after the Dow and S&P 500 rallied to fresh all-time highs.

Where next for the Dow Jones Index?
The Dow has traded within an ascending channel since early November. The price broke out above the ascending channel at 32,500 to power higher to a fresh all time high of 32976.

The RSI is not yet in overbought territory but is close. There could be scope for more gains prior to any consolidation. However, the bulls ned to break through the all time high of 32976 in order to target 33,000 round number prior to setting its sights on 34,000. 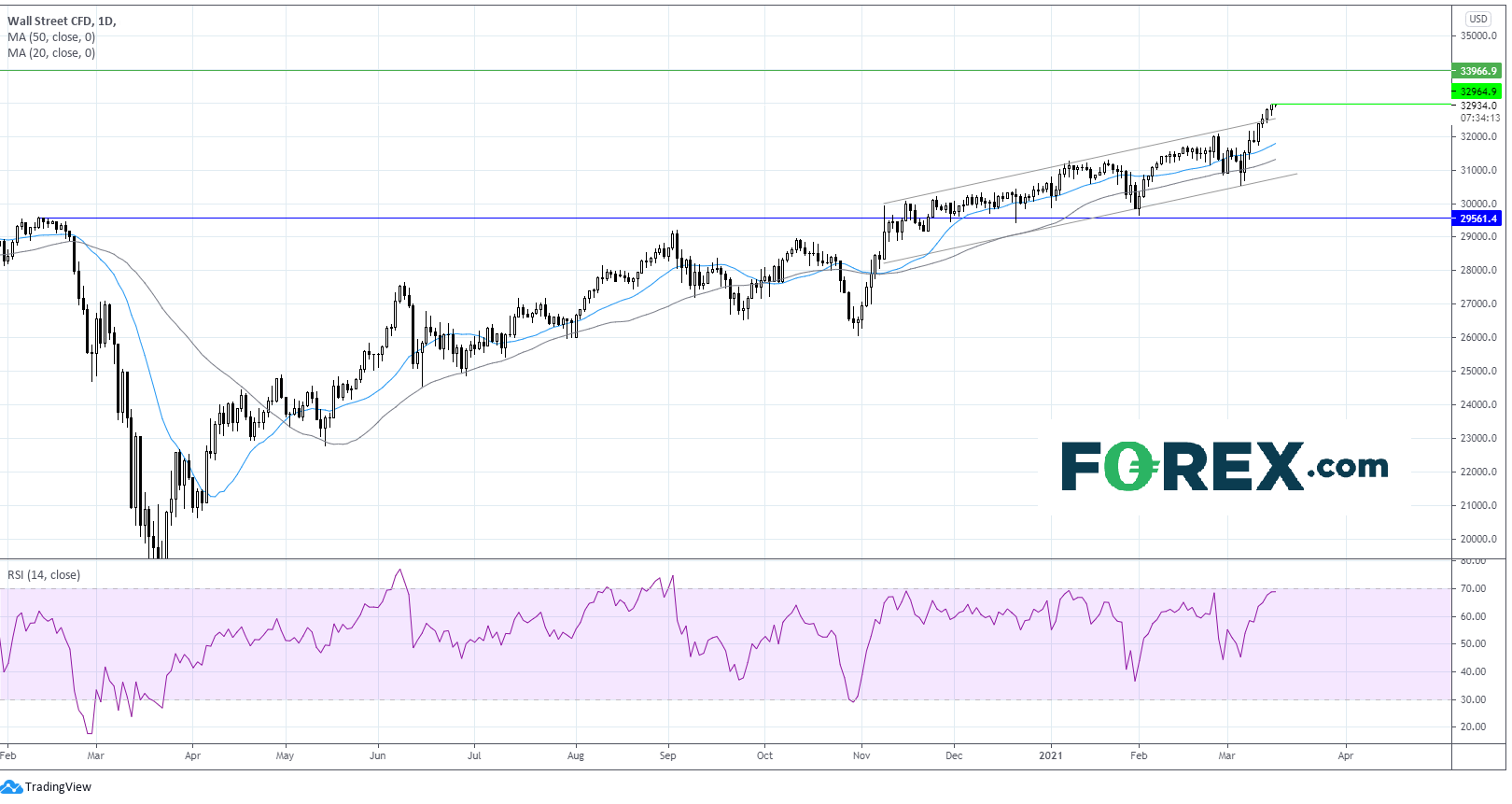 Facebook  - trades +0.3% pre-market after reaching a deal with News Coro to pay for news in Australia. This is a move which is likely to have consequences in other countries as well.

AstraZeneca + 2.8% pre-market after Canada approved the AZN covid vaccine for over 65's. Australia also said that it plans to distribute the vaccine,

Covid cases are on the rise again in parts of Europe. France, Germany and Italy are reporting rising daily covid cases. This comes at a time when a growing number of countries in the EU are suspending the use of the AstraZeneca vaccine of safety fears, even tjough the European Medicines Agency repeated its opinion that the benefits outweigh the risks.

Despite these issues AstraZeneca is topping the FTSE 100 index +3.4%

GBP/USD – The Pound is among the weakest major peers. GBP trades under pressure as post Brexit trading relations between the UK & EU hit a fresh low and after BoE’s Andrew Bailey affirmed that the central bank would continue purchasing bond across the year, pouring cold water on any hopes to the BoE moving early to tighten policy.

EUR/USD - is pushing higher following upbeat German ZEW sentiment data. The data revealed a jump to 76 vs 71.5 in February and above forecasts of 74.

Oil prices are heading southwards for a third consecutive session amid growing concerns over the resurgence of covid in Europe and ahead of stockpile data later.

Fears regarding future demand are on the rise as Europe’s covid situation appears to deteriorate. With cases rising and the vaccine programme going from one obstacle to another, tighter lockdown restrictions seem unavoidable.

Analyst Fiona Cincotta looks at the price action of WTI and levels to watch here.