What is a stock market crash and why do they happen?

What is the definition of a stock market crash?

A stock market crash is a sudden drop in the value of equities across the vast majority of constituents.


When these share prices collapse, a significant loss of paper wealth for publicly quoted companies ensues. It also means a loss in the investment portfolios of individuals holding the shares.

A stock market crash is not the same as a bear market, which is defined by a gradual, long-term and sustained decline in a market. By contrast, a crash is a short, sharp shock to a market.

It could be part of a bear market, but equally it might be followed by a rapid rebound that brings stocks back to where they were before the crash.

Why do stock markets crash?

There is often a sound macroeconomic reason that can trigger a stock market crash, but it doesn’t tend to explain the severity of the fall.


Steep drops are typically driven by a fear factor as “panic selling” comes into play. Clients will direct their brokers to liquidate their holdings to prevent their investments from dropping any further.

Sometimes excessive speculation creates economic bubbles in which share prices are artificially inflated. This is one of the most common catalysts for sparking a stock market crash.

What is the background to a typical stock market crash?

Negative economic events often provoke a sentiment of fear, leading some market participants to sell high volumes of stock and triggering many more to do the same. It creates what could be termed a “perfect storm” of factors contributing to crashes.

The following prevailing conditions are also vulnerable to crashes:

Crashes can be triggered by some of the following:


When do you know that a stock market crash has happened?

A stock market that drops 10% over a period of several days can be said to have suffered a crash. Such events are generally unexpected and the surprise factor can deepen the sense of shock and panic.

What are some historical examples of stock market crashes?

Many of the most infamous crashes are still cited today as examples to draw comparisons with when monitoring the markets.

During the Dutch Golden Age, prices for the most desirable bulbs of tulips, newly introduced to the country and symbols of wealth, reached extraordinarily high levels. They then dramatically collapsed.

This is generally considered to have been the first recorded speculative bubble in history. Interestingly, when Bitcoin first crossed $30,000 in late 2017 some analysts compared this to “Tulip Mania”, and they were arguably proved right during the resultant crash the next year.

Stock prices fell by nearly 50%, led by the manipulation of copper stocks by the Knickerbocker Trust Company. Several investment trusts and banks that had invested clients’ money in the stock market collapsed. Amid the chaos, the formation of the Federal Reserve in 1913 was crucial to help provide a guarantee that Americans could trust banks once again.

The Roaring Twenties proved to be a technological golden age, as innovations such as the radio, cars, aviation, telephones, and the electric power transmission grid were deployed and adopted. Companies that helped advance these developments enjoyed a tremendous boom period.

Wall Street bankers allowed their clients – using margin debt and leverage - to enjoy the ride by floating investment trusts which specialised in those stocks.

The Dow Jones Industrial Average rose by 600% in eight years. But then it all went wrong. Forced to liquidate their stocks because of margin calls, over-extended investors flooded the exchange with sell orders.

The DJIA lost 89% of its value before finally bottoming out in July 1932. The crash was followed by the Great Depression, the worst economic crisis of modern times, which plagued the stock market and Wall Street throughout the 1930s.

The 1980s were similar to the 1920s, in that the decade as a whole saw generous stock rises, though by now this was on a global scale. Then, over a period of four days in October 1987 and culminating in what was known as “Black Monday”, stocks crashed alarmingly.

Despite fears of a repeat of the Great Depression, the market rallied immediately after the crash, posting record single-day gains before the end of the month and it took only two years for the Dow to recover completely. Unusually, no fundamental reasons ever came to light to explain the 1987 crash.

The heavy exposure of multiple banks to packaged subprime loans and credit default swaps issued to insure these loans and their issuers rapidly devolved into a global crisis.
It resulted in several bank failures in the US and Europe and sharp reductions in the value of stocks and commodities worldwide.

On October 24, 2008, many of the world's stock exchanges experienced the worst declines in their history, with drops of around 10% in most indices. The sell-off continued deep into 2009 and the recovery was slow.

What happened to global stocks in the pandemic? 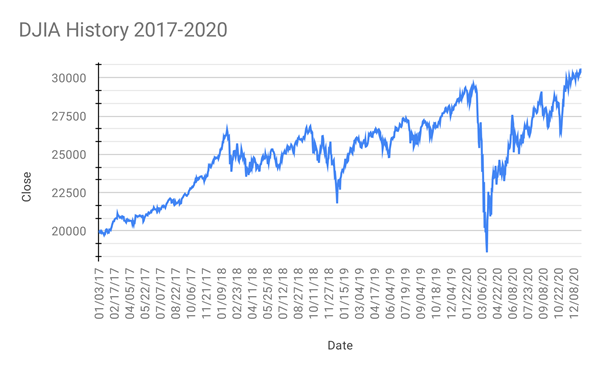 Although the 2020 crash was severe, markets like the Dow Jones (above) soon recovered powerfully

The onset of the coronavirus pandemic caused a stock market crash in March 2020. As well as shares falling dramatically across the board, crude oil fell into negative territory for the first time.

Soon speculators looked to “safe haven” assets, such as gold, government bonds and Swiss francs to divert their assets, and then defensive stocks like utilities and healthcare.

The crash caused a bear market that proved miraculously short-lived. In April 2020, sentiment flipped; global stock markets re-entered a bull market, and by November US market indices had returned to the levels seen at the start of the year.

For much of 2020, volatility was exceptionally high across a wide variety of markets in a number of jurisdictions.


How to trade at FOREX.com

You can trade with FOREX.com across a range of asset classes, though we cannot provide access to our full range of products from certain jurisdictions. Follow these easy steps to start trading now.