Will people still be looking to invest in meme stocks moving forward into 2022?  Memes are stocks that people invest in primarily based on their popularity on the internet, rather than relying on the fundamentals of the companies. Some people associate investing in meme stocks as a sort of gambling.  However, using technical analysis, which purely looks at price action and ignores the noise created by news and economic data, it is possible to get a better idea of where price may be headed next.  After all, price patterns are based on human emotion and behavior, which people repeat over and over again. Some meme stocks aren’t correlated to any index, while others seem most closely correlated to the Russell 2000. When looking at the price action for meme stocks, traders can get a better idea as to whether “the internet” is bullish or bearish on the stock.

GME is the original meme stock.  Just 1 year ago price was trading in the mid-teens.  However, the internet “got together” and decided to drive price higher, reaching an ultimate high of 483.00 on January 29th, 2021.  Since pulling back from the highs, GME has been oscillating around the 50 Day Moving Average and making a series of lower highs. 132.00 appears to be strong support.  GME has moved below the 61.8% Fibonacci retracement from the January 13th lows to the January 29th highs, which was 196.88.  The 50- and 200- Day Moving Averages offer a confluence of resistance at 187.30 and 188.79, respectively. 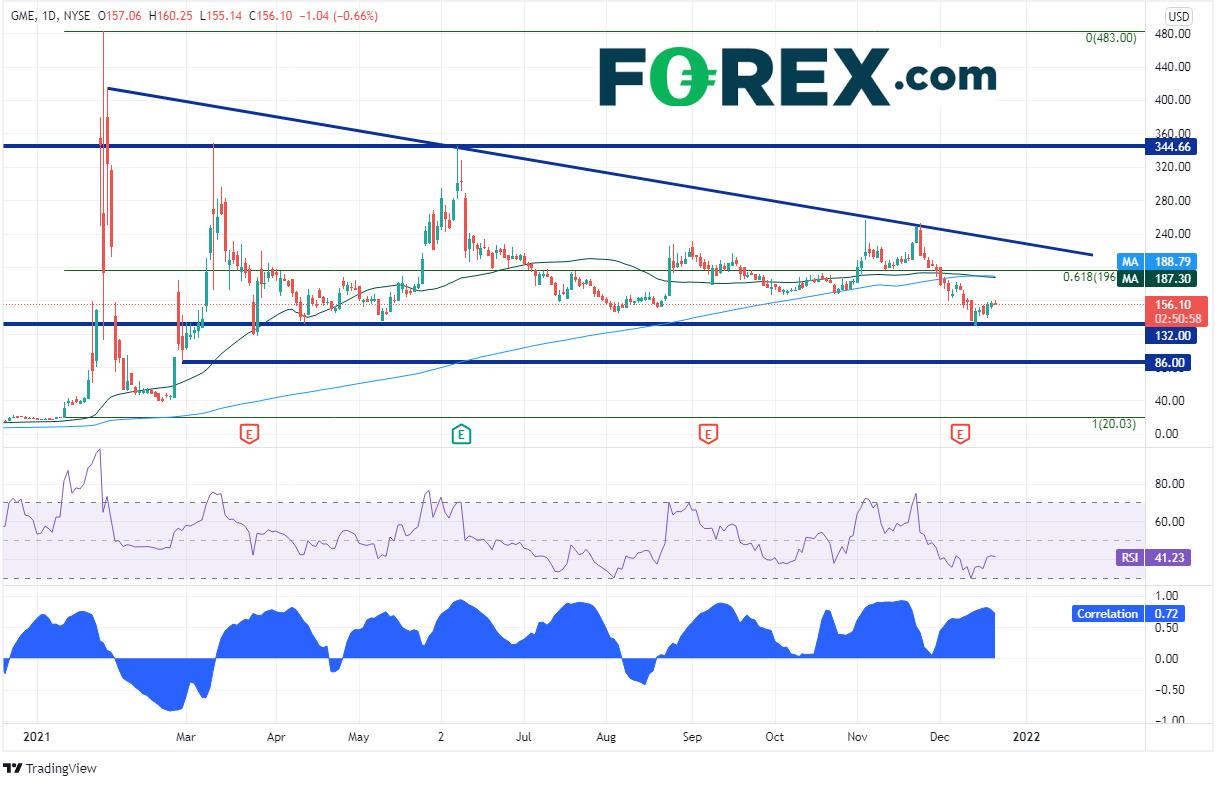 On a 240-minute timeframe, GME appears to be stalling near horizontal resistance at 159.15.   This resistance is also at the top trendline of a flag pattern.  The target for the breakdown of a flag pattern is the length of the flagpole added to the breakdown point.  In this case it is near 36.50.  Price must first break through horizontal support at 126.79 and 86.00 (see daily) while on its way to target.    If price moves higher, first horizontal resistance is at 159.15.  Above there is the 38.2% Fibonacci retracement and the 50% retracement from the November 22nd highs to the December 13th lows at 174.85 and 189.69 respectively. 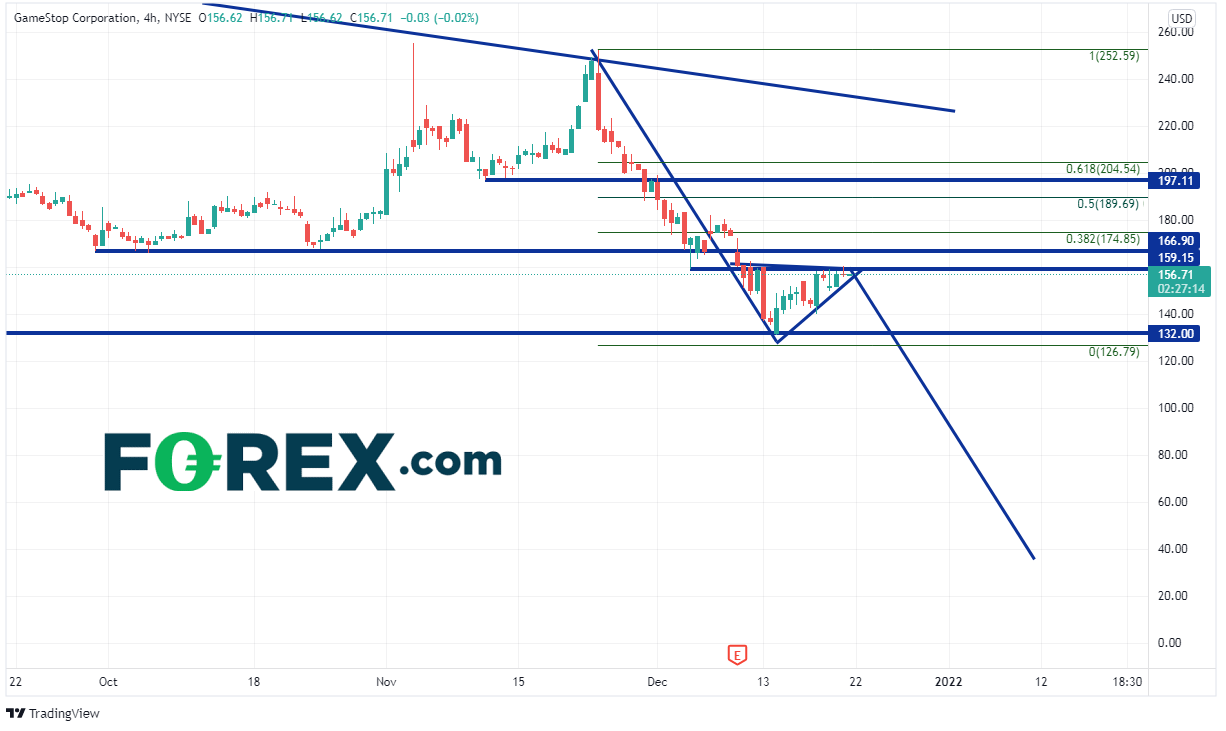 AMC Entertainment was the next stock with people gathered on the internet to buy,  1 year ago price was trading in the 4.50 range.  However, on June 2nd, traders pushed AMC all the way up to a high of 77.62.  The correlation coefficient had been strong vs the Russell 2000 since early in December, however recently pulled back to +0.78. (Still strong, but just below the “strong correlation” level of +0.80.) Since pulling back form the highs, AMC has been oscillating around the 50 Day Moving Average and making a series of lower highs.  As with GME, the price of AMC has broken below the 61.8% Fibonacci retracement level from the lows of May 13th to the highs of June 2nd.  However, unlike GME, AMC broke key support at 28.75 and traded to horizontal support at 20.36. The double bottom RSI from oversold territory help the stock to bounce. Resistance is at the December 21st highs and 200 Day Moving Average near 32.45.  The 50 Day Moving Average is just above there at 35.89.  Notice the shooting star on the price action for December 21st.  This indicates the bounce may be over. 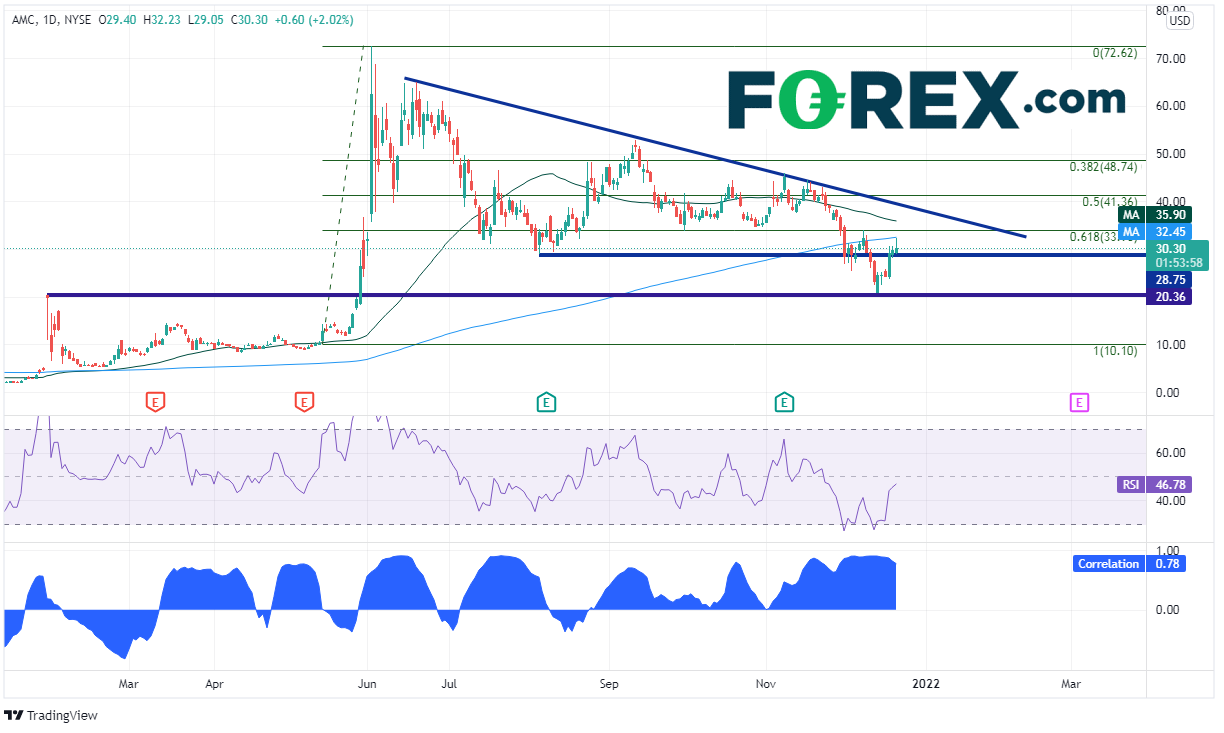 On the 240- minute timeframe, AMC also looks like it formed a flag pattern, however it may have already attempted to reach the target and come up a few dollars short.  The target from the breakdown point of 32.00 was near 16.00.  Price made a good attempt but couldn’t push through horizontal support near 20.31.  If the shooting star at the 200 Day Moving Average holds (on the daily timeframe), horizontal support is at the previously mentioned 20.31, 14.57 and 8.29.  Horizontal resistance above is at 33.81, which is the 61.8% Fibonacci retracement from the November 22nd highs to the December 14th lows near 34.58. 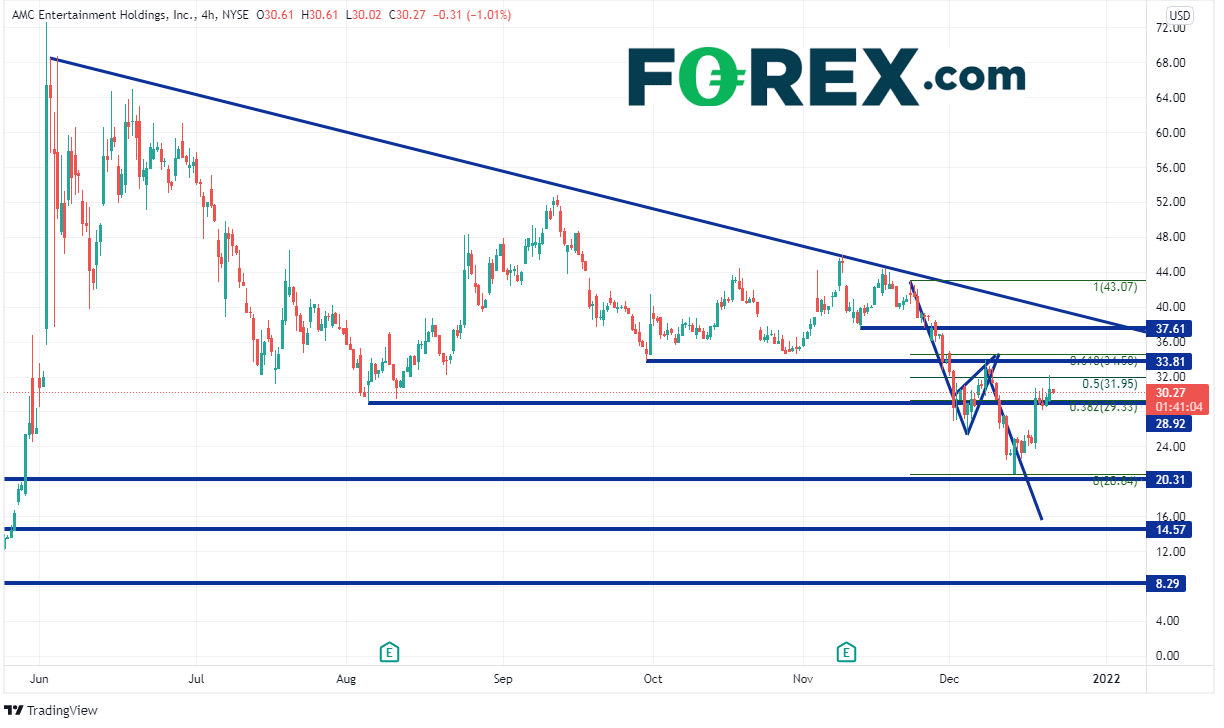 On July 29th, Robinhood Markets debuted on the NASDAQ with little fanfare, closing slightly lower for the day.  However, on August 3rd and 4th, the price of HOOD began to pick up steam as the internet got behind in.  Over the course of those 2 days, price traded from 38.00 to a high of 84.98.   However, as with other meme stocks, price pulled back.  There is no point in looking at a daily timeframe, and there isn’t much data to analyze.  On a 240-minute timeframe, the correlation coefficient is very high at +0.93.  A perfect positive correlation is +1.00. (For your information, the correlation coefficient on the 240-minute timeframe for GME and AMC are lower than their daily correlations).  Therefore, one can use the direction of the Russell 2000 as a guide to help determine the direction of HOOD.  After making highs on August 4th, the stock pulled back, making lower highs. On November 18th, HOOD broke below its IPO price and is currently continuing lower in a downward sloping channel.  HOOD has stalled at the 127.2% Fibonacci extension from the low of July 30th to the high of August 4th, near 19.23. Support is at the bottom, lower trendline of the channel near 13.80.  If price continues lower from there, next support isn’t until the 161.8% Fibonacci extension from the same time period near 1.35 (yes, 1 dollar and 35 cents!).  Resistance is at the top, downward sloping trendline of the channel near 19.25, the downward sloping trendline from early August near 28.25.  Lows on the day of the IPO act as the next level of resistance at 33.29. 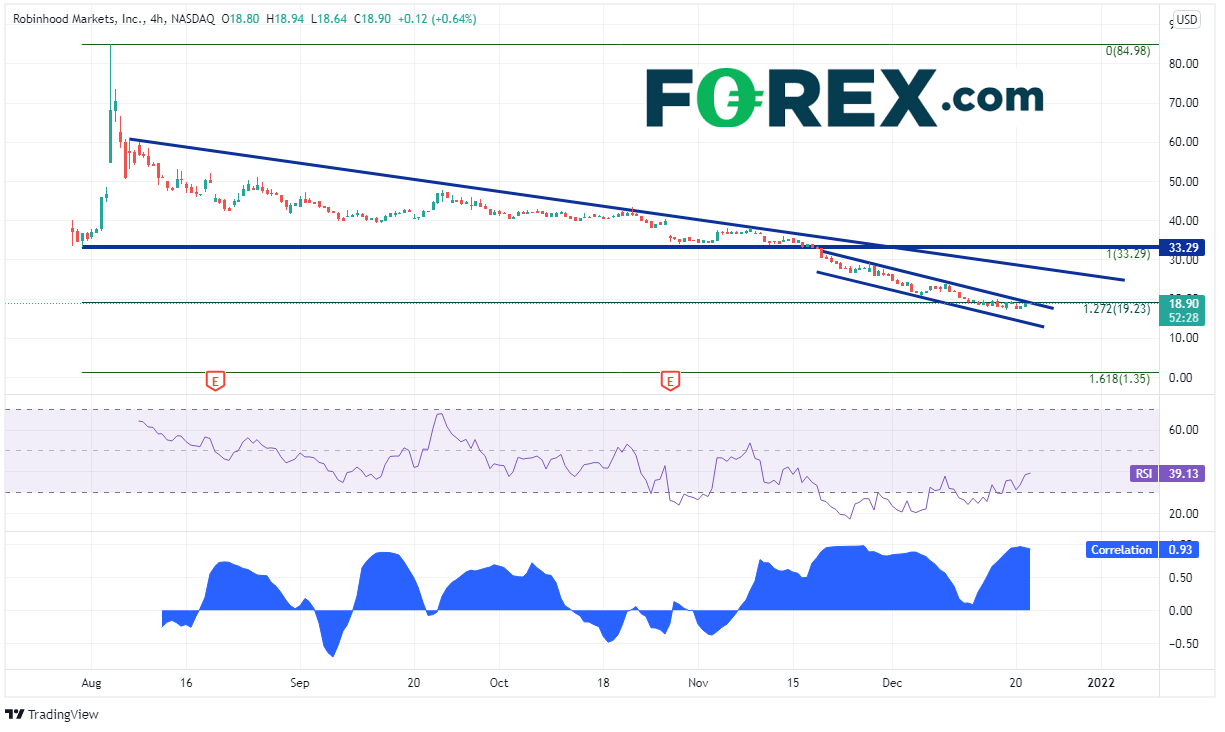 Meme stocks have been moving lower for the last few months.  Will prices continue to move lower in 2020? Right now, there is no reason to believe these stocks will abate any time soon.  The Russell 2000 may be able to help provide guidance for direction, but not for magnitude.  Keep an eye out for storylines as to what may be the new meme stocks in 2022!

View more
JOLTS job openings - an employment miss (not to be missed)
Could the Non-Farm Payrolls print be…….BAD?
US banks Q3 earnings preview: High interest rates help, but is a recession around the corner?
Technical Tuesday: Gold, EUR/USD and S&P 500
Meta Connect 2022 preview: Where next for Meta stock?
Reddit stocks: what meme stocks are trending?