As we discussed in our FOMC meeting preview report, the decision for a 50bps interest rate hike was never really in doubt, even after yesterday’s bigger-than-expected decline in inflation, and to the surprise of no one, that’s exactly what Fed Chairman Jerome Powell and company delivered.

Despite the as-expected decision, there is still plenty of new information to digest around the central bank’s monetary policy statement, the Summary of Economic Projections (SEP) and Fed Chairman Powell’s ongoing press conference:

When looking at the statement, you’d be mistaken for assuming there were exactly zero changes at first glance. As the “track changes” document below shows, there was only one change outside of updates to the current interest rate and date: The Committee revised its statement on the war in Ukraine to say it’s “contributing to” rather than “creating” inflationary pressures and weighing on the global economy. 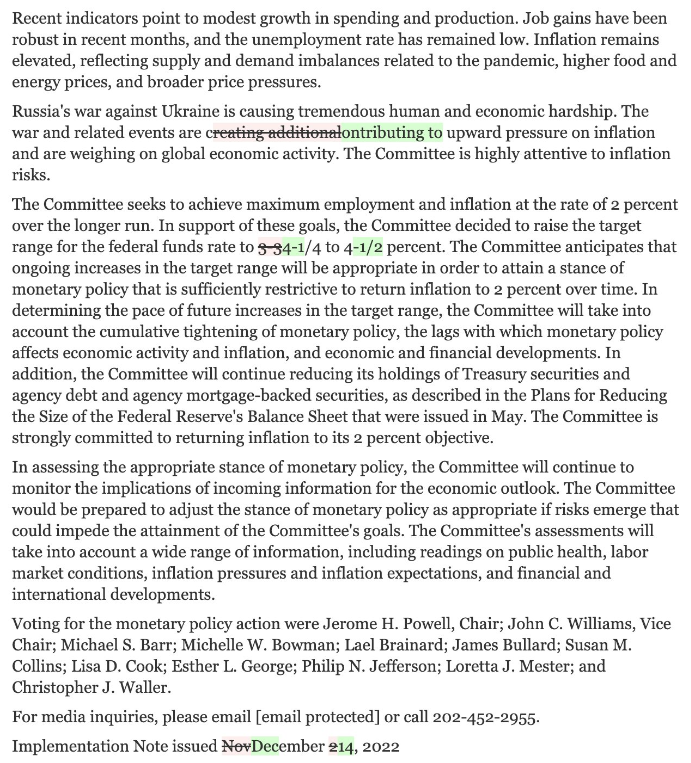 At the margin, this tweak might suggest that Jerome Powell and company believe inflationary pressures are becoming more entrenched, but the other components of today’s Fed festivities are more substantial and significant for determining the future path of monetary policy.

A summary of the changes to the central bank’s economic forecasts for the next couple of years follows:

On balance, these revisions show that the Fed is more concerned about inflation being sticky while growth sputters in the next couple of years (a step in the direction of the feared “stagflation” scenario), and that the central bank will have to raise (and hold) interest rates at a higher level throughout next year to combat price pressures.

Fed Chairman Powell is still speaking as we go to press, but so far he’s broken the recent mold by emphasizing the main (hawkish) message of the statement and economic projections, rather than softening/reversing it as he had in the past handful of meetings.

As you can see, the Fed Chairman isn’t yet willing to entertain a pause in rate hikes or the prospect of rate cuts in 2023, though he continues to emphasize the central bank’s data dependence.

As we go to press, the market isn’t necessarily buying that view, with over 50bps of rate cuts priced in for H2 2023, according to the CME’s FedWatch tool, so this tension between the Fed’s plan and the market’s expectations (which have actually been more accurate over the last decade+) will be a key theme to watch as we move through 2023.

The initial reaction to the FOMC statement and SEP reflects a more hawkish outlook than traders were anticipating, with the US dollar and treasury yields rising, while equities and gold fell. When Powell took the stage to confirm that message, the moves in yields and gold moderated, but the selloff in major stock indices accelerated.

Overall, it’s clear that the Fed isn’t willing to hint at a pivot until it sees the proverbial “whites in the eyes” of inflation, and with Jerome Powell and Company leaving a potential 50bps interest rate hike on the table for February, we could see continued profit-taking in stocks (along with tax-loss selling), and a bounce in the US dollar, into the new year. As we’ve seen, inflation data is likely to be the most important variable to watch in the coming year, so it will be important for readers to mark CPI and PCE release days on their calendars!