It seems like just yesterday that we were talking about how NFP reports could cause less market volatility because the path of the Federal Reserve’s monetary policy was set for more than half a year (in fact, it was just two months ago). How quickly things change!

However, after this week’s hawkish FOMC meeting minutes, traders are now pricing in more than a 70% chance of a rate hike in March, meaning that the next three NFP reports could well determine if interest rates lift off in about two months or closer to four when the Fed meets in May. After nearly two full years of ZIRP (zero interest rate policy) from the Federal Reserve, interest rate increases are nigh, and market volatility is likely to pick up from here.

With that background, we note that traders and economists are looking for 426K net new jobs in Friday’s report, with wages expected rise by 0.4% m/m, in the first NFP report of 2022: 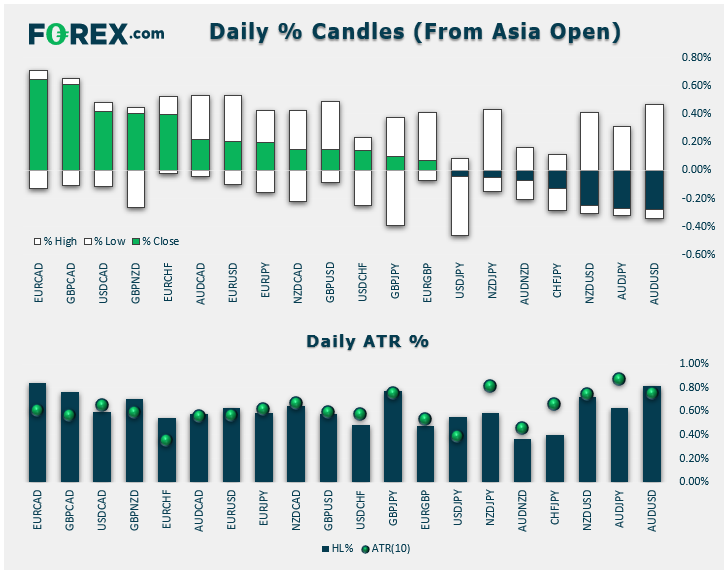 As a reminder, the state of the US labor market remains more uncertain and volatile than usual as it emerges from the unprecedented disruption of the COVID pandemic. That said, weighing the data and our internal models, the leading indicators point to a slightly above-expectation reading in this month’s NFP report, with headline job growth potentially coming in somewhere in the 425-525k range, albeit with a bigger band of uncertainty than ever given the current global backdrop.

Regardless, the month-to-month fluctuations in this report are notoriously difficult to predict, so we wouldn’t put too much stock into any forecasts (including ours). As always, the other aspects of the release, prominently including the closely-watched average hourly earnings figure which rose 0.3% m/m in November, will likely be just as important as the headline figure itself.

The US dollar index had a quiet December, consolidating in its well-trodden 95.50-97.00 for the entirety of the month. As of writing, the greenback remains near the middle of that range, giving no strong technical bias heading into the jobs report.

As for potential trade setups, readers may want to consider GBP/USD sell opportunities if the jobs report is strong. Earlier this week, cable tested strong resistance at the top of its broad bearish channel dating back to May, as well as its 200-day exponential moving average in the 1.3600 area. After a 400-pip rally since Christmas week, GBP/USD bulls may be eager to take profits if we get bullish fundamental news for the USD (bearish for GBP/USD).

On the other hand, a soft jobs report could present a sell opportunity in USD/CAD, which near the upper end of its six-month range and may be carving out a potential head-and-shoulders pattern since mid-November. As a reminder though, Canada will also release its monthly jobs report at the same time as NFP, so USD/CAD traders will want to keep an eye on both releases before trading the pair aggressively.