When the biggest takeaway from a first debate is that perhaps we shouldn’t have any more debates (or at least that the moderator should be able to mute the participants’ mics), it’s probably not a good sign.

In a microcosm of 2020 as a whole, last night’s Presidential debate was chaotic, disorienting, and frankly depressing. Rather than actually debating substantive policy proposals, Donald Trump and Joe Biden more often devolved into a series of personal attacks and name-calling between two geriatric men who clearly detest one another.

When it comes to markets, there are three major takeaways for traders from the debate debacle:

1)     Biden Rejected Being Labeled as a Leftist

Perhaps in an effort to play up ideological divisions among the Democrats, one of President Trump’s most consistent lines of attack against Biden was to label the former Vice President as a radical leftist. Biden pushed back aggressively on this label, refusing to endorse the “Green New Deal” championed by more liberal members of the Democratic Party or to commit to expanding the Supreme Court. In one of the most salient lines of the debate, Biden asserted, “The party is me, right now. I am the Democratic Party.” Whether this neutrality was simply an effort to avoid offending anyone in his party ahead of the election or a true sign of how Biden would govern remains to be seen, but at the margin, his comments suggest that some investors’ fears of a dramatic lurch leftward if Biden triumphs in November may be overblown.

After a “miss” in the 2016 election, traders are understandably skeptical of polls of all stripes, but for what it’s worth, post-debate polls gave the slight edge to the former Vice President. A SSRS/CNN poll found 60% of viewers said Biden did better in the debate vs. just 28% favoring Trump’s performance, while CBS News found 48% giving the edge to Biden vs. 41% for Trump.

Looking at the bigger picture, polls have shown a consistent 6-8% lead for Biden nationally (notably larger than Hillary Clinton’s edge at this time four years ago). With neither man doing anything to meaningfully broaden their appeal to undecided voters (indeed most viewers likely turned the debate off within 15 minutes in disgust!), most Democrats would chalk up anything but a catastrophic setback for Biden as “good enough” to maintain his current lead.

3)     Trump’s Continued Aspersions on the Legitimacy of the Election Raise the Risk of Election Night (Week?) Chaos

Arguably the biggest takeaway for investors came toward the end of the debate when President Trump declined to condemn white supremacists or tell his supporters to avoid civil unrest. When asked to condemn “Proud Boys” a far-right group widely condemned as a hate group, Trump declared that they should “Stand back and stand by.” Later, Trump urged his supporters to go to polls and “watch very carefully.”

The clearest reaction to the debate debacle was in US stock index futures. As the chart below shows, Dow Jones futures rallied through the majority of the debate before selling off sharply when Trump questioned the legitimacy of the election. That said, the US stock market has since recovered from its overnight swoon and is currently trading up by roughly 1% in early US session trade. 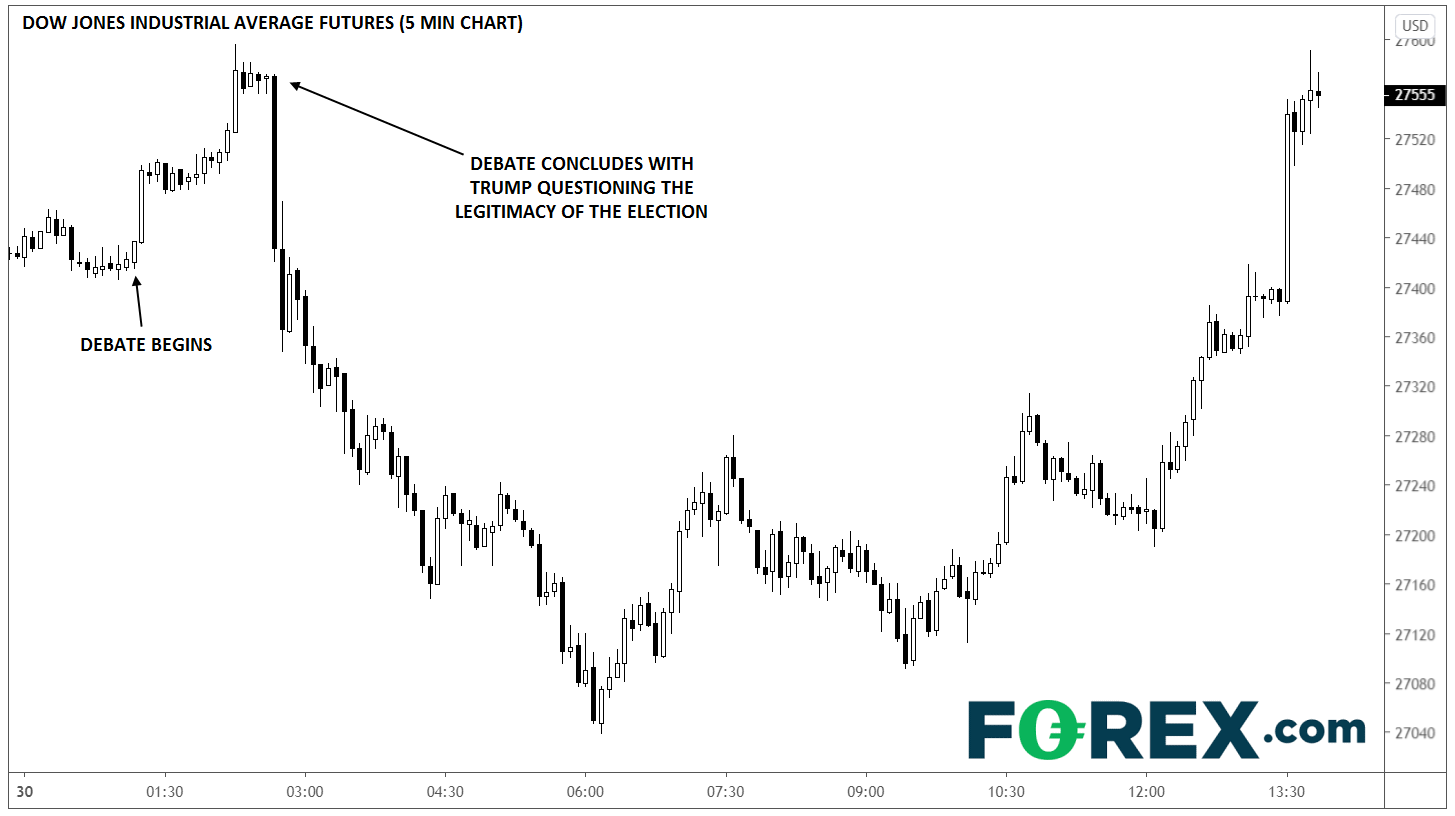 Outside of that, the market reaction to the debate was subdued. The US dollar ticked lower during the proceedings before rallying overnight to erase some of yesterday’s losses. Gold and oil were similarly quiet throughout the debate, though gold has since edged lower while WTI crude is ticking higher in early US trade.

Moving forward, traders are likely to key on economic data more than political developments, with the focus shifting to Friday’s highly-anticipated Non-Farm Payrolls report sooner rather than later.

European Open: USD drags itself up from its lows, Biden - Xi in focus
By:
Matt Simpson