Top nickel stocks: How to trade the surge in nickel prices

The Russia-Ukraine conflict has sent the price of commodities soaring as markets fret the isolation of Russia by western governments will remove significant supplies of everything from wheat and corn to palladium and nickel from the market.

Reports surfaced overnight that the price of three-month LME nickel hit a new all-time high after briefly surpassing the $100,000 per metric tonne mark. The surge was so great that the London Metal Exchange (LME) suspended trading of nickel this morning, citing an ‘unprecedented overnight increase’ and noting that the ongoing escalation of events in Ukraine was contributing to the volatile price movements. This will remain in force for at least the rest of today but could stay in place if things continue to prove too volatile.

Importantly, analysts also flagged that the extreme rise in nickel prices in recent days has also been the result of a short-squeeze, as large numbers of investors with short positions on the metal have had to exit their positions to counter their losses, which in turn has only fuelled the price increase.

Read more: What is a short-squeeze and why do they happen?

Below is the spot price of nickel (which is different to the three-month price) to demonstrate the significance of the surge in nickel prices this week alone: 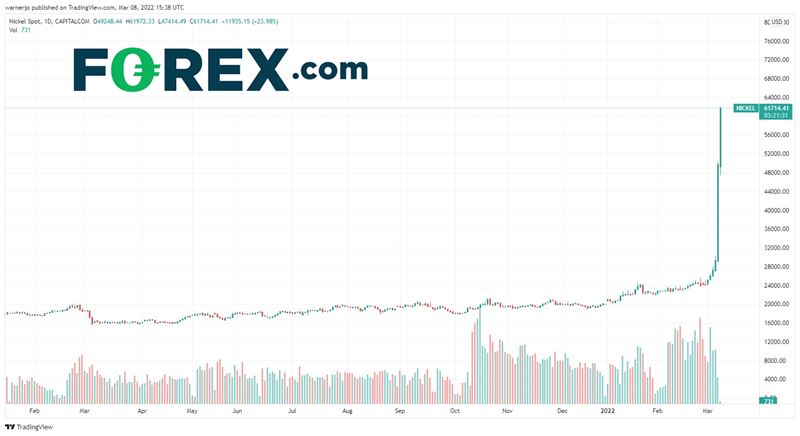 PGM prices are also on the rise

The conflict has also caused prices of other metals to surge considering Russia is a huge producer of other commodities. It is important to flag that nickel is found alongside other metals in the ground, meaning it is often a by-product and that companies mine a variety of other metals such as other Platinum Group Metals (PGMs) like palladium and platinum, both of which have also risen in value since the Russia-Ukraine crisis erupted.

Notably, BHP said just today that the surge in the price of nickel will spill over into the price of other commodities, fuel further inflation and hinder global growth. 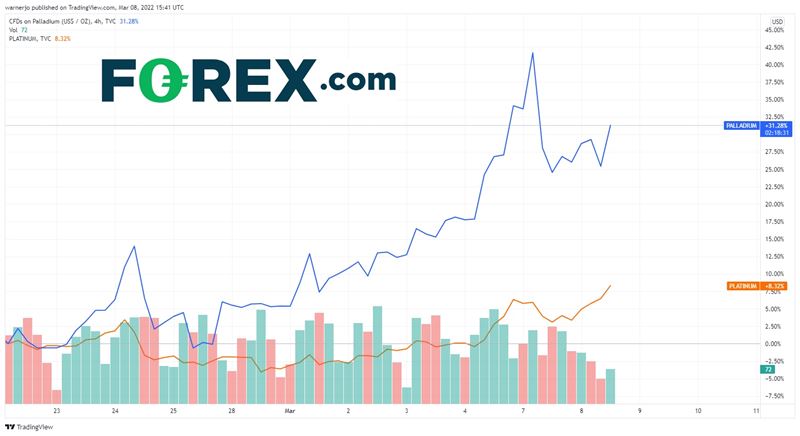 Let’s have a look at some of the major publicly-traded nickel producers and how they are performing amid higher nickel prices. Although some of the largest mining companies in the world, including Rio Tinto, BHP and Anglo American, count nickel within their portfolio they produce a wide-range of commodities compared to some other players in the market that can offer more direct exposure even if there are no pure plays on offer.

These can offer an alternative way to trade the nickel market and, although they often track movements in the price of the nickel and the other commodities they mine, there are additional drivers that move their share prices, as demonstrated by the first mining stock on our list, Norlisk Nickel.

Norilsk Nickel is the largest mining company in Russia and one of the biggest producers of nickel in the world. It mined 200,000 tonnes of the stuff in 2021 but only generated around one-fifth of its revenue from the metal as it is also a sizeable producer of other minerals including palladium, platinum, copper, cobalt and gold.

Still, the threat that sanctions could cut off Russian supplies of key commodities means global supplies could take a significant hit. Norilsk Nickel accounts for over 8% of global nickel supplies alone based on data from Statista, helping to explain why the price of the metal has surged so much in recent weeks.

Meanwhile, Norilsk Nickel shares have plummeted as investors dump Russian stocks on fears the company will be cut-off from international markets and unable to sell their products outside Russia’s sphere of influence.

Norilsk Nickel shares have plunged over 80% since the conflict in Ukraine started and now sit at all-time lows. The stock will remain out of favour so long as current geopolitical situation continues, but could become a strong recovery play should tensions ease. 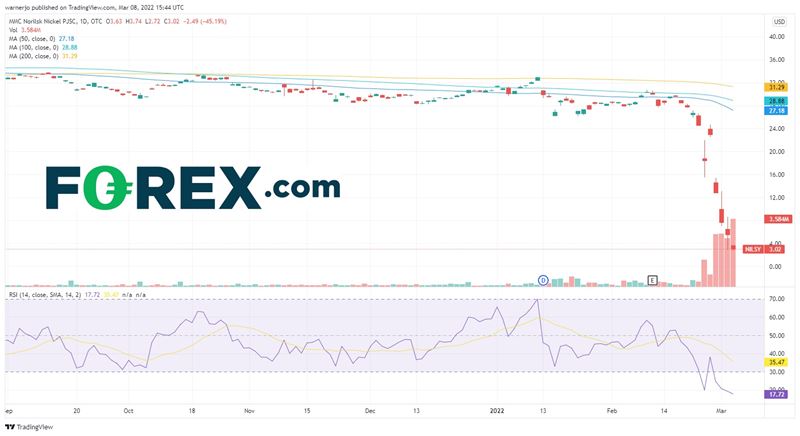 Vale is a mining behemoth that has operations in 30 countries around the globe and is the single biggest producer in the world of not only nickel but also iron ore. The Brazilian company’s high-grade nickel is perfect for batteries and making steel. Its nickel operations are in Brazil, Canada and Indonesia while its mines with iron ore, also a key ingredient in the steelmaking process, are also in its home country and complimented by plants that produce iron ore pellets in Oman and China.

Vale managed to significantly ramp-up production of nickel in the fourth quarter of 2021 after being hit earlier in the year by strike action, allowing it to fully benefit from the rise in prices, although this is being countered by higher production costs.

Vale shares have been rising in an uptrend since mid-November and the recent spike in commodity prices over the past two weeks has helped the uptrend accelerate. Buyers managed to push the price to a seven-month high of $21 at the start of this week before it slipped into overbought territory and prompted sellers to start cashing-in profits. If the current trend continues, we could see it recapture that high and target $23. The stock could slip to as low as the 200-day sma at $17 and still keep the current uptrend alive, but any move below there opens the door to the 100-day sma at $16 and then the 50-day sma at $14.50. 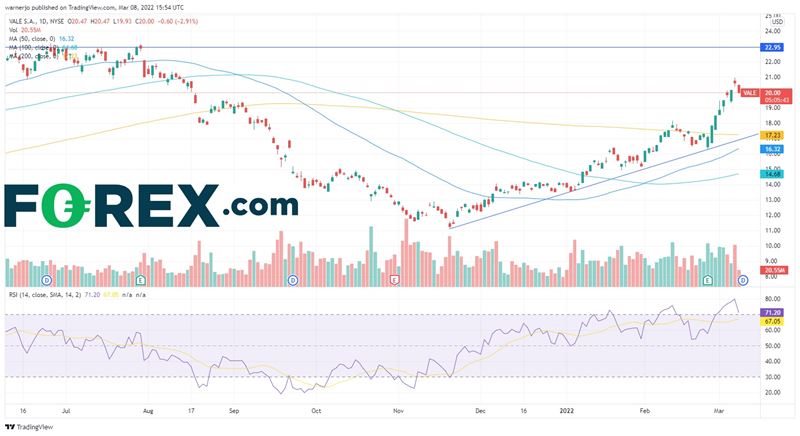 Hong Kong-listed Jinchuan Group is a China state-owned mining outfit and is the world’s third largest producer of nickel and the fourth biggest miner of cobalt. It is also a notable producer of copper and PGMs. Its mining operations are based in the Democratic Republic of Congo and Zambia, but it also has a metals trading arm that is active on a broader scale. Jinchuan saw revenue rise over 23% in 2021 as higher prices offset lower production.

Russia and China do a lot of trade with one another and the latter has refrained from becoming embroiled in the geopolitical crisis in order to keep relations alive with both sides, which investors may keep in mind when considering how to gain exposure to the market.

Jinchuan shares have been trending higher since the middle of November but have struggled to push above HKD1.49, which has acted as a ceiling on several occasions for the stock over the past month. The stock needs to close above here to kick the short-term uptrend into overdrive and bring the HKD1.55 high seen in February 2021 back into play. If the ceiling holds and the uptrend runs out of steam, then we may see the stock slip back below all three moving averages swiftly to end up below HKD1.26. 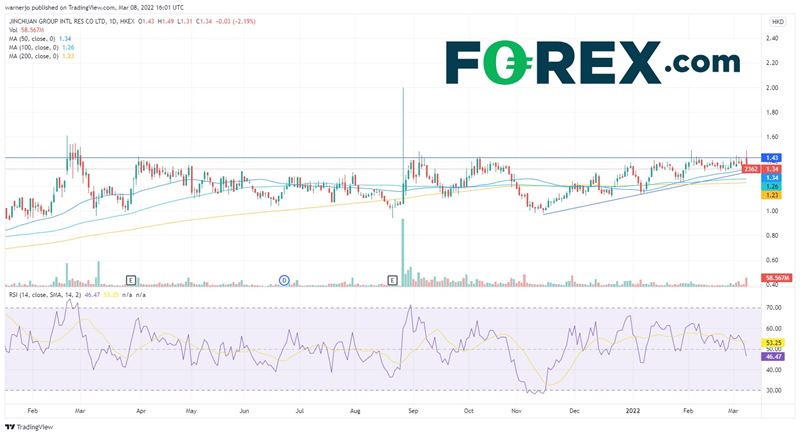 Sibanye Stillwater mines a variety of commodities including platinum, palladium and gold, but the sheer size of its operations means its mines significant amounts of nickel as a by-product that makes it among the biggest producers in the world. The company’s mines are spread across North America, Latin America and Africa, but its biggest nickel operation is located in France.

The South African company reported record results in 2021 as higher prices offset lower production of PGMs, and the fact it managed to cut production costs at a time when they are rising across the wider industry meant it was able to fully capitalise by improving its margin at both ends.

Sibanye Stillwater shares have risen over 62% since hitting a 14-month low in December and the uptrend has accelerated since the conflict began. However, the trend has recently lost momentum after hitting a high of $20.64 yesterday, in-line with the all-time high seen last April. The stock needs to break above here to signal a move higher, a view supported by the bullish RSI and reinforced by rising trading volumes. The fact the 50-day sma has recently crossed back above the 200-day sma is another bullish sign. However, we could see the stock slip to as low as $17 and keep the current uptrend alive. The fact the stock has diverged from the RSI suggests we could see a temporary pullback toward the trendline. A move below there would break the uptrend and open the door toward the 50-day and 100-day smas at around $15. 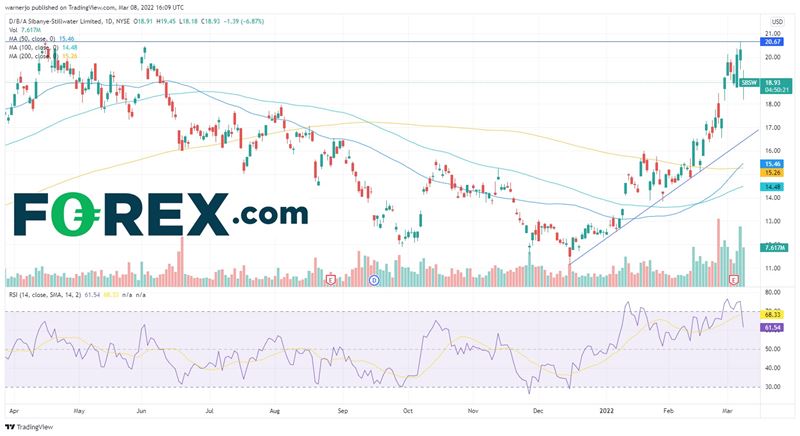 What will nickel price volatility mean for electric vehicle stocks?

Nickel is predominantly used in the steel-making process but is better known for its growing role in the makeup of batteries for electric vehicles, and Russia is the biggest producer for battery-grade nickel in the world.

Forecasts suggested nickel supply would lag behind growing demand this year before the conflict in Ukraine started, causing severe concerns that the imbalance will only increase going forward.

Electric vehicle stocks are already grappling with shortages of other key components and semiconductor chips, and we have started to see some hike the prices of their vehicles to counter rising costs. Higher prices will deter people from making the switch to electric considering most manufacturers admit they need to bring prices down to accelerate the transition to greener transport.

The timing is notable too. While there is no shortage of players in the market, a number of companies are set to enter the market and 2022 and hundreds of new models are set to be launched this year alone. Companies like Rivian and Lucid have only recently started rolling cars off their production lines, and companies spanning from startup Fisker to traditional automakers like Ford are set to introduce new EV models this year. That will only intensify competition for resources within the industry and increase demand at a time when supplies are set to tighten.

Traditional automakers are also at risk too considering palladium and other metals are key to make catalytic converters. Volkswagen has already announced it has stopped taking orders for certain hybrids as it battles against the range of headwinds hitting the industry.

How to trade nickel stocks

You can trade a variety of nickel mining and electric vehicle stocks with Forex.com in just four steps: