AB Foods reported steep falls in revenue and profit during the first half of its financial year, driven by the billions in lost sales whilst Primark stores were closed during lockdown, but reinstated the dividend and said it expects to be highly cash generative after it reopened stores.

Primark’s food-based businesses selling everything from sugar to Twinings tea performed well during the period, generating an adjusted operating margin of 30%, but it was not enough to absorb the lost sales and profits from Primark during the period.

The performance was much better on a statutory basis, with reported pretax profit down just 8% to £275 million after it booked considerably less exceptional costs compared to last year when the pandemic erupted.

Still, with most Primark stores now reopen again, AB Foods said it saw ‘record sales’ during the first week since UK stores started to welcome customers again on April 12. However, stores in the likes of France, Ireland and in some parts of Germany are still closed and awaiting a date for when they can reopen.

‘Looking ahead, with stores reopening and Primark once again becoming cash generative, our confidence is reflected in our decisions to repay the job retention scheme monies in respect of this financial year and to declare an interim dividend,’ said AB Foods.

The interim dividend will be for 6.2 pence per share and AB Foods said it will decide whether to pay a final dividend based on its trading in the second half and the outlook at the time.

AB Foods said it expects its food-based businesses to deliver a softer performance in the second-half following the strong growth seen in the first, and said Primark’s profit this year to be ‘somewhat lower’ than the previous year.

Associated British Food’s share price has been trending higher since early November. However, the run higher had been losing momentum in recent weeks.

Today’s drop in the open saw the share price briefly fell through the ascending trendline.

However, it has regained its poise to find support on the trendline and its confluence with the 50 EMA on the daily chart.

This level at 2375 is proving to be a tough nut to crack. A meaningful move below this level is needed in order for sellers to gain momentum and head back down towards 2290 the low March 25. Beyond here 2195, the low from February 12 could come into play.

On the upside, should 2375 hold then a move back towards the 20 EMA at 2434 could be on the cards. A close above here could see the buyers look towards 2525 the post pandemic high. 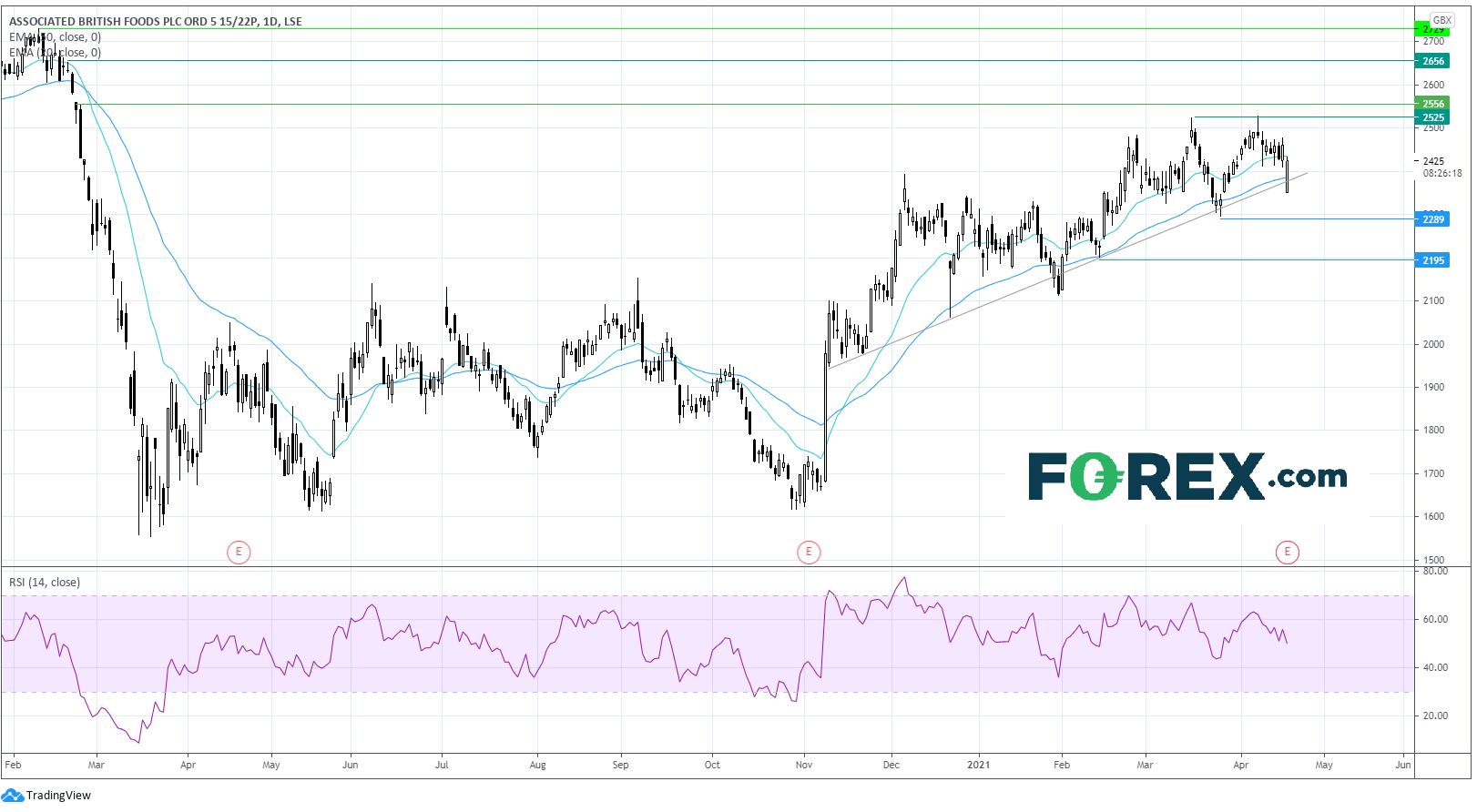 Avast said revenue and earnings both grew by more than 10% during the first quarter of 2021 as the cybersecurity firm raised its expectations for the full year following the recent sale of its Family Safety mobile business.

The company said revenue rose 10.5% to $237.1 million in the first three months of the year from $214.6 million the year before. Excluding the impact of acquisitions, disposals and discontinued operations, revenue grew 10.9% to $236.4 million from $213.1 million. Demand for Avast’s cybersecurity products has risen as people and businesses shift online during the pandemic.

Adjusted Earnings before interest, tax, depreciation and amortisation rose 10.3% to $133.7 million on a margin of 56.4%.

‘Avast has made a good start to the year with continued demand for the company's security, privacy and performance solutions. The business is trading in line with expectations as we successfully execute on our stated goals to drive customer engagement and monetisation. We look forward to the remainder of the year with confidence,’ said chief executive Ondrej Vlcek.

Avast recently announced it had sold its Family Safety mobile business and the loss of income from the business will ‘modestly’ hit earnings but benefit reported results.

‘As a result, for full year 2021 the group now expects to deliver at the upper end of the 6% to 8% organic revenue growth guidance, with the Consumer Indirect segment likewise revised to low single-digit percent growth,’ said the CEO. ‘Due to continued R&D and marketing investment, which is second half weighted, guidance for the group's adjusted Ebitda margin percent remains broadly flat versus FY 2020.’

Hammerson said it is still collecting significantly less rent than is due from its tenants as they continue to struggle during lockdown, but said it is encouraged by the return of shoppers since rules were eased last week.

Hammerson owns and runs shopping centres and retail parks and said around 90% of its tenants in the UK are currently operating after lockdown rules were eased last week and allowed non-essential retailers to reopen.

‘Footfall is competitive with pre-pandemic levels.  Across a seven-day average, footfall at our flagships is around four-fifths of that achieved in the same week in April 2019.  This is an improvement of approaching 50% points on reopening in June 2020,’ said Hammerson.

Tighter restrictions remain elsewhere. Only around 30% of its tenants in Scotland are currently open but this should significantly improve when lockdown rules are eased next Monday. Its sites in France are being hit by ‘stringent restrictions’ as all non-essential retail remains closed. Although France is due to review its rules on May 3, it is yet to outline a roadmap out of lockdown. Ireland, which has ‘endured the longest lockdown in Europe’, has indicated retailers can reopen in May or June.

Hammerson said it has collected 51% of the rent due for the first quarter and 40% of the rent for the second. That compares to the 78% of rent collected over the course of 2020.

‘The company continues to work hard with brand partners to focus on improving collection rates on agreed rents.  Looking forward to when all occupiers are able to operate, we expect collection rates for both the current year and FY20 to continue to improve as restrictions are eased across territories,’ said Hammerson.

Moneysupermarket.com said revenue was down 20% in the first quarter of 2021 as demand for products like insurance, financial services and travel all fell because of the pandemic.

Quarterly revenue fell to £85.5 million from £107.3 million the year before. Income fell across all its divisions.

Money, which allows users to compare financial products like loans and credit cards, suffered the biggest fall with revenue down 26%. The company said fewer people searched for credit products because of tighter lending criteria but that there has been an improvement in both conversion and demand.

Insurance reported a 21% decline after demand for home insurance fell and fewer people take out car insurance while stuck at home during the pandemic.

Home services, offering the likes of broadband and energy switching, saw revenue slide 15% while Travelsupermarket’s revenue was negligible during the period as travel remains severely disrupted by the pandemic.

Moneysupermarket.com said it still expects to meet expectations outlined back in February. Analysts currently expect the company to report adjusted Ebitda of between £97.1 million to £118.5 million in 2021. That would compare to the £107.8 million delivered in 2020.

‘We continue to help millions of households save money on their bills through lockdown and the energy price cap rise. We are moving ahead with our updated strategy, enhancing how we manage our data and starting to attract customers more efficiently. Several channels remain impacted by COVID-19, but we are well positioned to weather this period and return shortly to profitable growth,’ said chief executive Peter Duffy.

Moneysupermarket.com shares were trading 1.9% lower in early trade at 265.8.

Revenue for the first nine months of the financial year was broadly flat year-on-year at $284.2 million on lower production of 2.5 million carats compared to over 3.0 million the year before.

‘Production during the period reflected continued out-performance from Cullinan, with remedial action to address waste ingress at Finsch delayed as a result of excessive rainfall levels, which also negatively impacted Koffiefontein, whilst the Williamson mine remains on care and maintenance. We expect to see improved performance from Finsch as underground water ingress reduces and the remediation steps are implemented,’ he added.

Petra said it is now in a ‘far stronger position’ after it recently restructured its capital, which helped cut net debt to just $290.7 million from over $700 million at the end of 2020.

Petra Diamonds shares were trading 2.6% higher in early trade at 1.57.