Lloyds Banking Group said profits came in higher than expected during the first quarter of 2021 as it was able to release funds it had set aside for bad loans thanks to an improving economic picture, prompting it to upgrade its full-year guidance.

The UK-focused bank said net income fell 7% to £3.7 billion as low interest rates weighed on its topline. However, pretax profit jumped to £1.89 billion from just £74 million the year before as it unwound £459 million worth of credit loss provisions. Its return on tangible equity jumped up to 13.9% from 3.7% the year before.

Net income came in lower than expected but pretax profit was well ahead of the £1.12 billion expected by analysts.

‘The coronavirus pandemic continues to have a significant impact on people, businesses and communities in the UK and around the world. Whilst we are seeing positive signs, notably the progress of the vaccine roll-out and the emergence from lockdown restrictions, the outlook remains uncertain. The group remains absolutely focused on supporting its customers and Helping Britain Recover from the financial effects of the pandemic,’ said chief executive Antonio Horta-Osorio.

It is the CEO’s last set of results before he steps down from his role later this month to become the chairman of Credit Suisse. He will be replaced by Charlie Nunn, who previously lead HSBC’s wealth and personal banking operations.

Lloyds believes the economic outlook has improved enough to upgrade its guidance for the full-year. The bank is now expecting to deliver a net interest margin in excess of 245 basis points and for a statutory return on tangible equity of between 8% to 10%. That is up from its previous target for a net interest margin of 240 basis points and returns of between 5% to 7%.

Lloyds broke lower last week but found support on its 50 SMA on the daily chart. The Lloyds share price trades above its 50 & 100 DMA and within the ascending channel dating back to the start of the year in an established bullish trend.

Resistance can be seen at 46.5p the upper band of the ascending channel ahead of 48p, which is the low from 2019.

Strong support can be seen at 42p the confluence of the lower channel and the 50 sma which could prove to be a tough nut to crack. A move below this level would negate the current bullish trend. Below here horizontal support at 41p ahead of the key psychological level 40p come into focus. 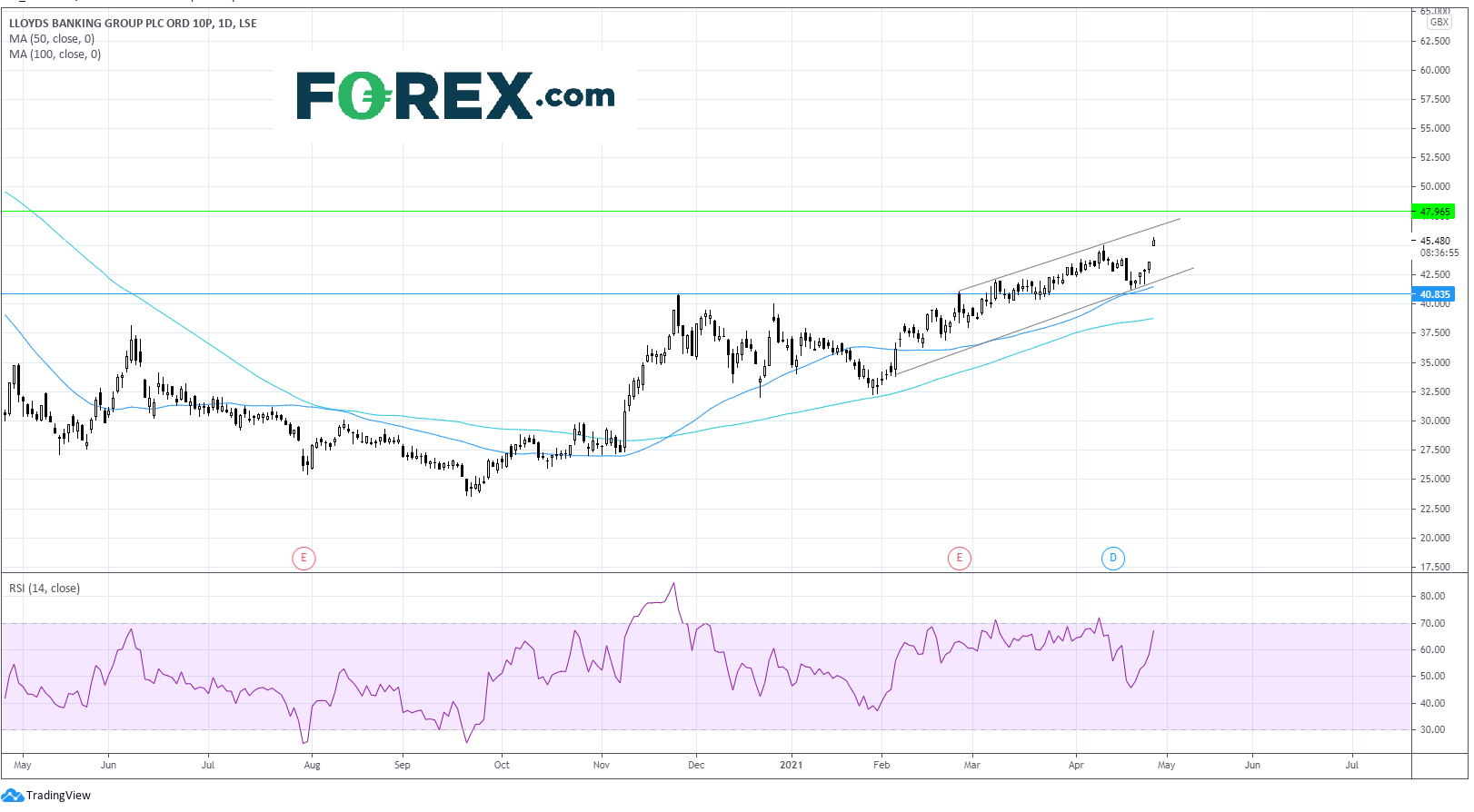 Sainsbury’s pushed into the red by the pandemic

Sainsbury’s reported higher sales during its recently-ended financial year but was pushed into the red after booking £485 million worth of Covid-19 costs, stating it expects its underlying profit to start growing again this year as things normalise.

However, the rise in sales did not translate to higher profits as they were offset by £485 million worth of Covid-19 costs. Underlying pretax profit dropped 39% to £356 million from £586 million as a result. That was ahead of the £330 million minimum target set by Sainsbury’s but below the £394.5 million expected by analysts.

At the bottom-line, Sainsbury’s was pushed to a pretax loss of £261 million for the year from a £255 million profit the year before.

Sainsbury’s said it expects underlying pretax profit in the new financial year to come in around £620 million.

The supermarket will pay a final dividend of 7.4 pence for the year, taking the total for the year to 10.6p, which was supplemented by a further special payout of 7.3p in lieu for the previous financial year.

Reckitt Benckiser said it made a strong start to the year as demand for its hygiene products offset weaker sales of its health and nutrition products, keeping it on course to deliver its goals for the full-year.

The company said like-for-like sales rose 4.1% in the first quarter of 2021. Hygiene sales jumped 28.5% thanks to strong demand for Lysol, Finish and Air Wick. That offset a 13% fall in LfL sales of health as demand for cold and flu products fell and a 7.4% drop in sales from nutrition due to difficult conditions in Hong Kong and tougher comparatives from the year before in the US.

‘Our Health business is seeing improved trading in sexual wellbeing, very strong growth in Gaviscon and improved execution overall.  Meanwhile, we expect the difficult current market conditions for our cold and flu relief products to improve over time,’ the company said.

‘In Nutrition, trading continues to be strongly affected by the closure of the Hong Kong border, although we are beginning to annualise the impact of this. IFCN performance in the US and Latin America remains strong and we are seeing improved trends in parts of ASEAN. Our portfolio is constructed to benefit pre- and post- COVID, and the inherent balance in our portfolio leaves us favourably placed to perform well in both the short- and longer-term,’ Reckitt added.

The company is expecting LfL revenue to stay flat to reporting 2% growth over the full-year while its operating margin is expected to tighten slightly from last year.

Reckitt said it remains on track to deliver its medium-term goals and released a new 2030 sustainability roadmap that aims to cut the company’s carbon footprint by 50% and for half of its net revenue to come from sustainable products by the end of this decade – supported by a £1 billion investment.

Reckitt Benckiser shares were trading 1.9% lower in early trade at 6432.5.

Dixons Carphone said sales of electrical goods experienced double-digit growth during its recently-ended financial year despite the fact its stores were closed for much of the period.

Electrical sales were up 14% in the 51 weeks to April 24, driven by 13% growth in the UK & Ireland and 16% growth in its international markets. Although most of its stores were severely disrupted by lockdown restrictions during the year, Dixons Carphone managed to counter this with a strong online performance – with sales more than doubling to over £4.5 billion during the year.

The company said its strong performance prompted it to return all the £73 million in government support it received from the furlough scheme. Taking this into account, Dixons Carphone said it expects to report full-year adjusted pretax profit of around £151 million when it releases its annual results on June 30.

That would compare to the £166 million adjusted profit delivered in the previous financial year.

Dixons Carphone said it expects to book exceptional costs of around £130 million to account for the disruption caused by the pandemic, and that profits will take a £30 million hit from items that would previously have been capitalised. It is aiming to end the year in a net cash position of around £150 million.

Dixons Carphone shares were trading down 1.2% in early trade at 155.2.

Travis Perkins has formally completed the separation of the Wickes Group this morning, with both companies now publicly-trading as standalone independent businesses.

The separation has been in the works for years and was briefly paused when the pandemic hit before being resumed when Wickes continued to perform well. It is designed to allow both businesses to pursue their own strategy and maximise returns for shareholders, with investors receiving one Wickes share for each Travis Perkins they owned.

Travis Perkins and Wickes operate in the same space but serve different segments of the market. Travis Perkins will now be focused on cementing its position as the UK’s leading distributor of building materials to the likes of large contractors and housebuilders, expanding Toolstation (particularly in Europe), which serves small tradespeople, and its plumbing and heating division.

Wickes has evolved into a very different beast and has been growing at a faster rate than Travis Perkins, especially since the pandemic started. There has been significant investment into Wickes digital capabilities over the years and this has paid-off during the pandemic. In fact, Wickes said it is ‘moving towards’ two-thirds of all sales involving a digital journey – whether that is customers researching products online to actually buying them through its website or app.

Travis Perkins shares were trading 10.9% lower in early trade this morning at 1435.8, with the fall expected as investors strip Wickes contribution out from the rest of the business. Travis Perkins intends to conduct a share consolidation tomorrow to counter any drop in its share price today, which should see its share price return to similar levels to before the demerger.

Wickes shares started trading at 250.0 a share this morning and had risen to 272.0 in early trade.