Burberry earnings preview: where next for Burberry stock?

Investors are hoping that British fashion house Burberry will be posting positive interim earnings, despite declining demand from China and worsening economic conditions.

When will Burberry release its interim earnings?

Burberry is set to release its interim earnings for the 6 months to September 2, on Thursday November 17th.

Burberry is expected to announce revenues of £1.3 billion in H1, up 9% year on year (YoY), and a net operating profit of £227 million.

It’s expected the company will announce a 24% increase YoY in adjusted earnings per share, up to an estimated 41p.

Analysts are also predicting an increase in Burberry’s dividend per share by 10% from last year’s 11.6p payment.

Demand for luxury fashion in general has continued in H1 and with the Christmas season approaching, interest in stocks like Burberry is rising.

The company’s interim results will give investors an indication of whether it’s faring as well as other luxury brands like Watches of Switzerland and Moncler – which both unveiled strong first half earnings, with revenues rising by 31% and 12% respectively.

There’s been a dim view of Burberry’s sales, as almost a third are made in China, where the resurgence of COVID-19 lockdown measured has slowed the reopening of stores. However, other brands have noted recovery in the Asian market, such as the Swiss luxury brand Richemont which posted strong sales in the region.

So, investors will be looking to see whether Burberry has seen any benefit too. Investor's will also be hoping for some insights into how Burberry fared on Singles Day, an unofficial holiday celebrated in China where unmarried individuals buy themselves luxury gifts.

So, we could see this trend continue. Current estimates are that comparable retail sales could rise anywhere from 3-4%. Largely because, despite the waning economic activity in the United Kingdom and rest of Europe, the company’s core target market of higher-income earners is likely to be insulated from the cost-of-living crisis.

The company’s total expenses are expected to increase to £690 million, up 8% YoY, so passing on costs to consumers may be unavoidable. But estimates of Burberry’s operating margin are up too at a consensus of 19.6% - which is just shy of the company’s 20% target – due to cost-cutting measures such as reducing outlet activity and stopping in-store discounts.

In its Q1 statement, Burberry said it expected “high-single digit revenue growth and 20% margins in the medium term.” and that “based on the July effective FX rates as of 11th July, [it] now expects a currency tail wind of c.£190m on revenue and c.£90m adjusted operating profit in FY23.”

Where next for Burberry stock?

Burberry shares have rallied 37% since bottoming-out six months ago and the stock is on course to recapture the February-peak of 2,063p if it can keep up the momentum. From there, it can look target the 2,085p level of resistance seen in April and July 2021.

However, the stock has faced more resistance since hitting 2,030p, which has pushed the RSI into overbought territory. That could lead to the stock coming under renewed pressure if we don’t see a positive catalyst from the update this week. Notably, the 25 brokers that cover Burberry are already fearful that the recent rally has been overdone considering they have an average target price of 1,917.7p – roughly aligned with the peak in October. A slip below here could see it slide back toward the 1,813p level of support saw last month. 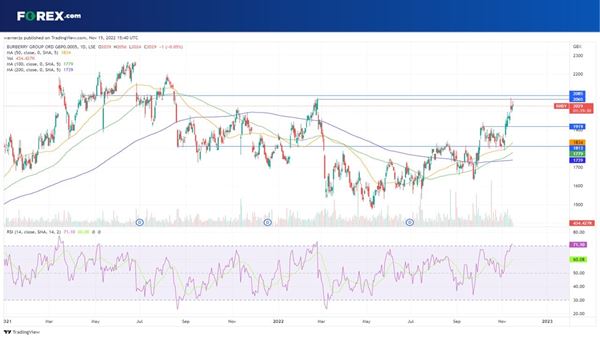 How to trade Burberry stock

You can trade Burberry shares with FOREX.com in just four easy steps:

Or you can try out your trading strategy risk-free by signing up for our demo trading account.