JD.com Q1 preview: Where next for JD stock?

JD.com will release first quarter earnings before US markets open on Tuesday May 17.

JD.com describes itself as a ‘supply chain-based technology and service provider’ and can be broken down into four segments. JD.com is known for its major ecommerce platform in China that sells everything from electronics to luxury goods to almost 570 million customers and boasts a significant strength thanks to its vast logistics network that makes it a key partner for other retailers keen to get their products to people around the country. It also runs JD Health, the largest online healthcare platform in the country, and JD Industry, which provides infrastructure and tools to help businesses with supply chains. Both divisions also leverage its expertise in logistics.

Wall Street forecasts revenue will rise 16.5% year-on-year during the first quarter of 2022 to RMB236.8 billion, but its operating profit is forecast to plummet over 85% year-on-year to RMB505.3 million. JD.com has reported heavy net losses at the bottom-line in the last two quarters but is expected to report a profit of RMB310.2 million, although that will be just a fraction of the RMB3.64 billion in earnings reported the year before.

Although its topline continues to rise, this is set to be the fourth consecutive quarter of slower sales growth. China’s economy has been severely disrupted by fresh Covid-19 lockdowns and is seeing a slowdown in consumer spending. This occurs at a time when competition has also intensified as companies like Pinduoduo and Tik Tok-owner ByteDance capture more market share in China amid an already competitive environment involving formidable players like Alibaba, which is also suffering right now after reporting its slowest sales growth since 2014 last month.

Plus, it has been sunk into the red as costs soar and squeeze already razor-thin margins. Fulfilment costs are expected to have risen over 15% in the first quarter, marketing expenditure is forecast to have jumped 47% and general day-to-day running costs are set to rise over 40%. R&D costs are also starting to climb once again. Costs continue to rise despite the surge seen in 2021 as inflation continues to rattle the global economy.

It is worth noting that this will be the first set of earnings since JD.com shuffled the top of its management last month, when president Lei Xu became CEO to run the business and succeed Richard Liu, who remains chairman and focused on the longer-term strategy of the business.

Chinese companies that have listings in the US have suffered in recent years due to regulatory challenges both at home and abroad. China has been overhauling rules and cracking down on the dominance of internet-driven businesses, while the US has been threatening to delist Chinese companies because the two countries are still struggling to find a mutually agreeable way to audit the books of businesses with dual-listings in both nations. Just last week the US SEC put JD.com, along with around 80 other firms, on its list of foreign companies that could be forced to delist from American exchanges because it has failed to comply with the rules. In JD.com’s case, the SEC is concerned that it can’t inspect or investigate the numbers checked by the company’s auditor in China.

The threat that Chinese companies like JD.com could lose their US listings is significant. Ride-hailing giant DiDi is set to ask shareholders to vote on a proposal to abandon its listing on the New York Stock Exchange later this month. That comes just months after it completed its botched US listing that was scuppered by Chinese authorities launching an investigation into the company just days after its IPO after accusing it of violating data privacy and national security laws. The fear is that more could follow.

Even if the SEC decides against ousting Chinese firms from exchanges, there is the threat that the constant to-and-fro between the regulators of both countries could prompt more to leave the US if the two countries can’t agree on how the auditing process should work. If faced with a decision between the two, they will always pick China as this is where they do business. For example, DiDi has said it is considering applying to join the Hong Kong Stock Exchange once it has delisted from the US and resolved the issues flagged by regulators. For now, Chinese companies face an impossible task in trying to please both the US and China and the ongoing dispute between the two countries continues to weigh on sentiment. Any breakthrough here would undoubtedly be a catalyst for not only JD.com but for all dual-listed Chinese equities.

Where next for JD stock?

The latest leg of the downtrend has accelerated and the fact the RSI is in bearish territory, reinforced by the fact trading volumes have continued to steadily rise over the last five sessions, suggests we could see the stock continue to drift lower toward the $41.50 low. The fact it rebounded after entering oversold territory when it hit this level in March suggests it should hold as a floor. This must hold to avoid the opening the door to sub-$40 for the first time in over two years. 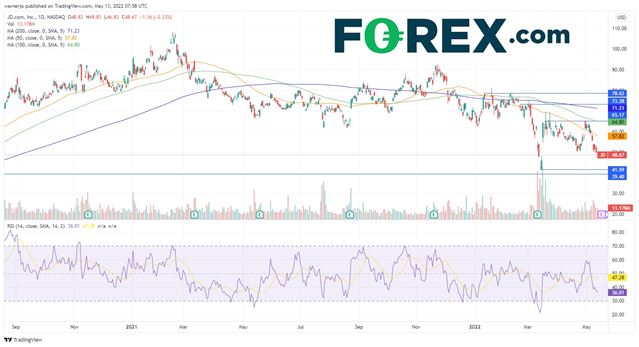 How to trade JD.com stock

You can trade JD.com shares with Forex.com in just four steps: