BP announced yesterday that it plans to sell its 19.75% stake in Rosneft and said its CEO Bernard Looney has also resigned from the Russian company’s board with immediate effect. Former CEO Bob Dudley, who was also nominated to the Rosneft board by BP, has also stepped down.

BP has also terminated its other joint ventures with Rosneft in Russia.

Why is BP selling its stake in Rosneft?

BP has been operating in Russia for over 30 years and has held the stake in Rosneft since 2013. However, the company said Russia’s attack on Ukraine ‘represents a fundamental change’ that has prompted the company to decide it simply cannot justify holding a stake in one of Russia’s largest state-owned enterprises.

‘We can no longer support bp representatives holding a role on the Rosneft board. The Rosneft holding is no longer aligned with bp’s business and strategy and it is now the board’s decision to exit bp’s shareholding in Rosneft. The bp board believes these decisions are in the best long-term interests of all our shareholders,’ BP chair Helge Lund said.

The decision also follows on from the UK’s business secretary Kwasi Kwarteng raising concerns with BP over its stake in Rosneft. He said that ‘Russia’s unprovoked invasion of Ukraine must be a wake up call for British businesses with commercial interests in Putin’s Russia’.

Rosneft said BP’s decision to exit from 30 years of successful cooperation was down to ‘unprecedented political pressure’, according to reports from Russian news agencies.

What will this mean for BP?

BP warned the move will require it to change how it accounts for Rosneft on its books, which is likely to lead to a ‘material non-cash charge’ in the first quarter of 2022.

BP said this change has to be made because it can no longer claim to have ‘significant influence’ over Rosneft despite its large stake, especially after its nominees stood down from the board.

How will BP sell its stake in Rosneft?

BP has not outlined how it plans to offload its stake in Rosneft – or when - but analysts say the company could write-off the entire shareholding, sell the stake back to the Russian company, or offload it to another potential buyer. Some have even raised the prospect of the stake being seized.

There is some speculation that state-backed businesses in regions like China or the Middle East could emerge as potentially interested parties, but it is unclear how willing another country is to publicly conduct such a deal in the current environment.

Notably, Sky News reported that FTSE 100 asset manager abrdn was prevented from selling its stake in Rosneft due to restrictions on foreign share trades on Moscow’s stock exchange. The report said abrdn supported BP’s decision to divest from the Russian firm and that it decided to sell up itself immediately after the invasion began, but has been prevented from doing so.

What will this mean for BP shareholders?

The biggest concern for investors is how the severance with its long-established and often lucrative ties to Russia will impact its financial performance and whether it will impact shareholder returns.

The dividends Rosneft pays BP will no longer be able to boost payouts to BP investors, but the London-listed company said the significant rise in oil prices means it can continue to deliver the shareholder distributions it has promised investors through to 2025.

BP said it still has the ability to increase its ordinary dividend by around 4% through to 2025 while maintaining investment and a strong balance sheet, and said it can return around $4 billion in buybacks per year through to 2025 at $60 per barrel, with current prices suggesting significantly more could be returned if they remain high.

The conflict in Ukraine has prompted concerns about global energy supplies and has pushed the price of oil past the $100 per barrel mark for the first time since early 2014, providing support for oil stocks. However, BP’s close ties to Russia has seen the stock diverge and lose ground.

BP shares have been trending lower since hitting a post-pandemic high earlier this month and the news over the weekend has pushed the stock down over 4% this morning to 361p as markets get their first chance to react. However, this has rebounded after initially sinking to a two-month low of 351p early this morning.

The RSI is trending lower and sinking further into bearish territory, suggesting the downtrend could continue. The 200-day sma, which currently sits at 335p, should be treated as the ultimate floor for the stock considering shares have only briefly traded below this level before attracting buyers back into the market over the past 12 months.

The stock is currently flipping above and below the 100-day sma this morning and this is the first level that needs to be recaptured to convince investors it can push higher, back toward the 50-day sma at 375p. Beyond there, the stock can start to target the January high of 400p. 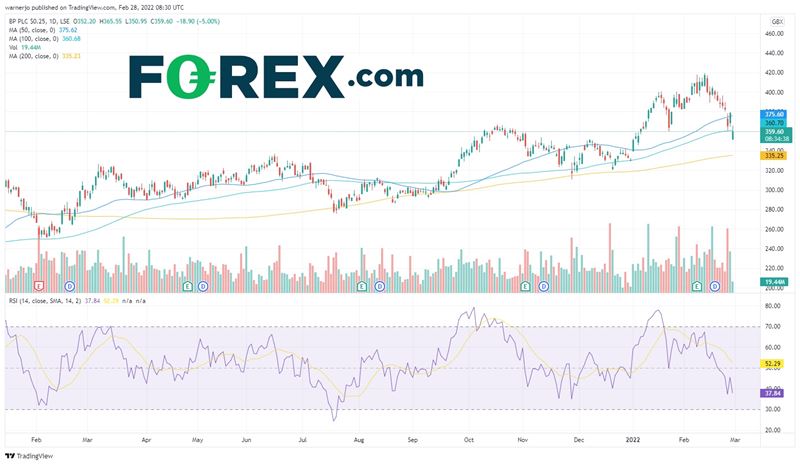