Tencent Music Q4 preview: Where next for TME stock?

Tencent Music Entertainment Group will release fourth quarter and full year earnings for 2021 after US markets close on Monday March 21.

Tencent Music is predominantly an online music streaming platform, but it offers a wider social element built around likes, follows and sharing that is driven by a slew of other features spanning from live streaming and concerts to video and karaoke services.

Wall Street forecasts revenue will fall 8.6% year-on-year to RMB7.62 billion in the fourth quarter, with net profit expected to plunge over 53% to RMB561.4 million as costs and investments rise at a faster pace than sales.

Analysts expect Tencent Music to have ended 2021 with 76.3 million online music paying users, up from 71.2 million at the end of September as it continues to shift users to its lower-margin subscription business.

Overall online music Monthly Active Users (MAUs) is expected to come in at 627 million, down from 636 million three months earlier but up 0.8% from the year before. Social entertainment MAUs are expected to drop 10% year-on-year to 200.5 million, and that will mark a steep fall from the 205.0 million it had at the end of September.

User growth has been under pressure since the start of 2020 because of the ongoing regulatory overhaul of the tech and digital industries in China, as well as increased competition in the social space. For example, regulators tore-up the exclusive licensing deals it had agreed with key music labels and introduced new rules for live-streaming platforms. Plus, although Tencent Music owns the three most popular music streaming apps in China, competition has intensified as it battles for customers against the likes of Bytedance, Xiaomi, Baidu and Alibaba. Below is an outline of the largest music streaming apps in China as of November 2021, according to Statista:

This has all impacted pricing, with the average revenue per paying user for online music forecast to come in at just RMB8.55 in the fourth quarter – its lowest price on record.

Tencent Music is taking action to improve the music content on its platform and the way it monetises it. For example, it has launched the Tencent Musician Platform for aspiring artists and has upgraded video and social features on the likes of QQ Music and Kugou Music. It has also expanded the amount of long-form audible content it has, helping attract a different type of user. It also continues to benefit from cross-selling its music services on the platforms owned by its biggest shareholder Tencent, such as Weixin, Tencent Games and Tencent Video.

Its unrivalled market-leading position and strong ties with Tencent should keep Tencent Music in pole position going forward. But the heavy investments being made to grow its subscription business, improve relations with artists and introduce new products such as podcasts does not come cheap and is likely to weigh on earnings going forward.

Tencent Music has been one of many Chinese stocks listed in the US to rally higher this week after the Chinese government intervened in the recent rout by pledging to support financial markets and overseas listings, removing some key uncertainties for the digital industry. Some analysts had suggested the regulatory overhaul on tech could last for years to come but the government has now promised to draw a line under the review soon. China and the US are also thought to be coming close to an agreement on a suitable audit process and new rules that satisfy both sides, reducing the threat that Chinese stocks will have to abandon their US listings.

Tencent Music Entertainment shares have been drifting lower and lost over 80% in value during the past year. Shares hit an all-time low of $2.95 at the start of this week, which has formed a floor for the stock that has since gapped higher to trade closer to $4.63 following the supportive news from the Chinese government.

The sharp move upwards we saw yesterday pushed the RSI out of oversold territory and saw daily trading volumes hit their highest level in just under one year, supporting the view that the stock can go on to find higher ground now some key uncertainties have been removed.

However, the stock is likely to remain volatile until details of the government’s plan are revealed. The $2.95 floor must hold to prevent opening the door to fresh all-time lows. If a reversal can gain momentum, then the stock may swiftly recapture the 50-day sma at $5.70 and the 100-day sma at $6.50. Considering much of the pressure on shares has come from the regulatory pressure and economic uncertainty in China, the news could allow Tencent Music to quickly recover the heavy losses seen over the past year if the government’s actions prove effective, suggesting it isn’t too early to bring the 200-day sma target at $8.59 onto the radar. The 22 brokers covering the stock agree and have an average target price of $9.43 on the stock, implying it can more than double over the next 12 months. 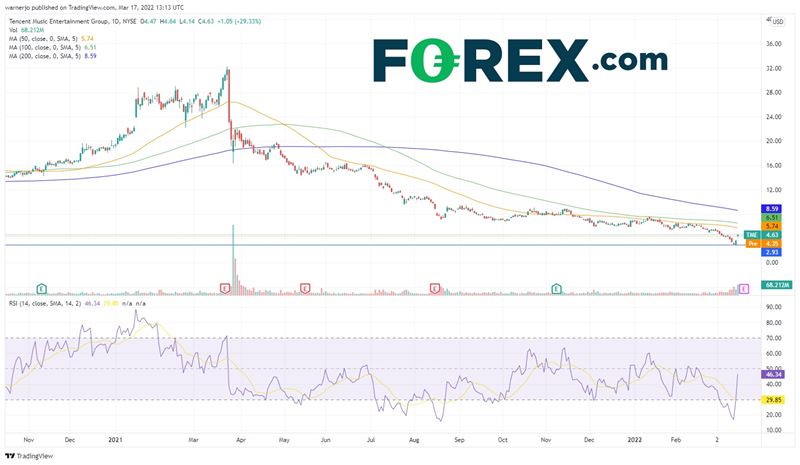