When will Zoom release its Q4 results?

Zoom Video Communications will release its results for the fourth quarter and full year on Monday March 1 at 1400 PT (2200 GMT). This will cover the three-month and 12-month periods ending on January 31, 2021.

Zoom earnings consensus: what to expect

Zoom has been one of many tech stocks that was propelled into the spotlight when the coronavirus pandemic erupted as its video communication tool became essential for people and businesses to communicate during lockdown.

Business has boomed since people started to work at home. The number of businesses using its service has risen more than five-fold and the number of large customers has doubled.

As a result, Zoom has said it expects revenue to quadruple for the full year to a range of $2.575 billion to $2.580 billion compared to the $622.7 million reported the year before. A Reuters-compiled consensus shows analysts are expecting Zoom to narrowly beat its guidance with revenue of $2.581 billion.

Zoom has said Non-GAAP income from operations (operating profit) will rise to a range of $865 million to $870 million from just $88.7 million the year before. However, analysts believe Zoom will miss its target range with profit of $864.5 million.

In terms of the fourth-quarter numbers, Zoom has said revenue will be between $806 million to $811 million and that Non-GAAP operating profit will be in the range of $243 million to $248 million.

Can Zoom keep up the momentum?

The pandemic has played into Zoom’s hands, forcing businesses to move to remote and flexible working and adopt new technology to ensure everyone can still communicate.

Zoom had 433,700 customers with more than 10 employees at the end of the third quarter which ran to October 31. That compared to just 81,900 at the end of January 2020, before the pandemic swept globally. It had 1,289 customers that were paying more than $100,000 a year, double the 641 it had before the pandemic as businesses ramp-up their spending.

It also announced earlier this year that it has sold its one millionth Zoom Phone less than two years since launching the all-in-one business phone that unifies traditional and traditional telecoms systems. This is available to subscribers to Zoom Pro and Zoom United plans.

The momentum that Zoom has gathered over the last year is incredible. The question is how long it can keep delivering these sort of numbers. The outlook appears fairly buoyant over the short-term. Although countries are hoping to exit lockdown this year there are no signs that offices will be jam-packed again anytime soon, and governments are likely to leave it down to businesses to decide when their employees should return, if at all.

Things look bright over the long-term too. Although the reopening of offices could see people use Zoom less, many people and businesses are expected to embrace a more flexible approach to work even once the pandemic ends and this will mean Zoom and other communication services will remain a vital part of infrastructure for virtually all businesses.

It could struggle to keep delivering the kind of growth it has experienced over the past year, but the long-term fundamentals remain strong for the industry. Investors will want to see evidence that momentum is gathering pace for now and eagerly watching for any signs that pandemic-induced growth has peaked.

How to trade Zoom’s results

Zoom has significantly beaten expectations during the last three quarters, which as resulted in its share price rising between 1.5% to 8.8% on the days it has announced results. Zoom shares have more than trebled over the last year but have lost momentum since peaking at $559 on October 16.

Brokers are bullish on Zoom shares in the long-term. They currently have an average Buy rating on the stock, comprised of 6 Strong Buys, 6 Buys, 15 Holds and 1 Sell. The average target price of $466.1 implies there is around 20% potential upside to the current share price. 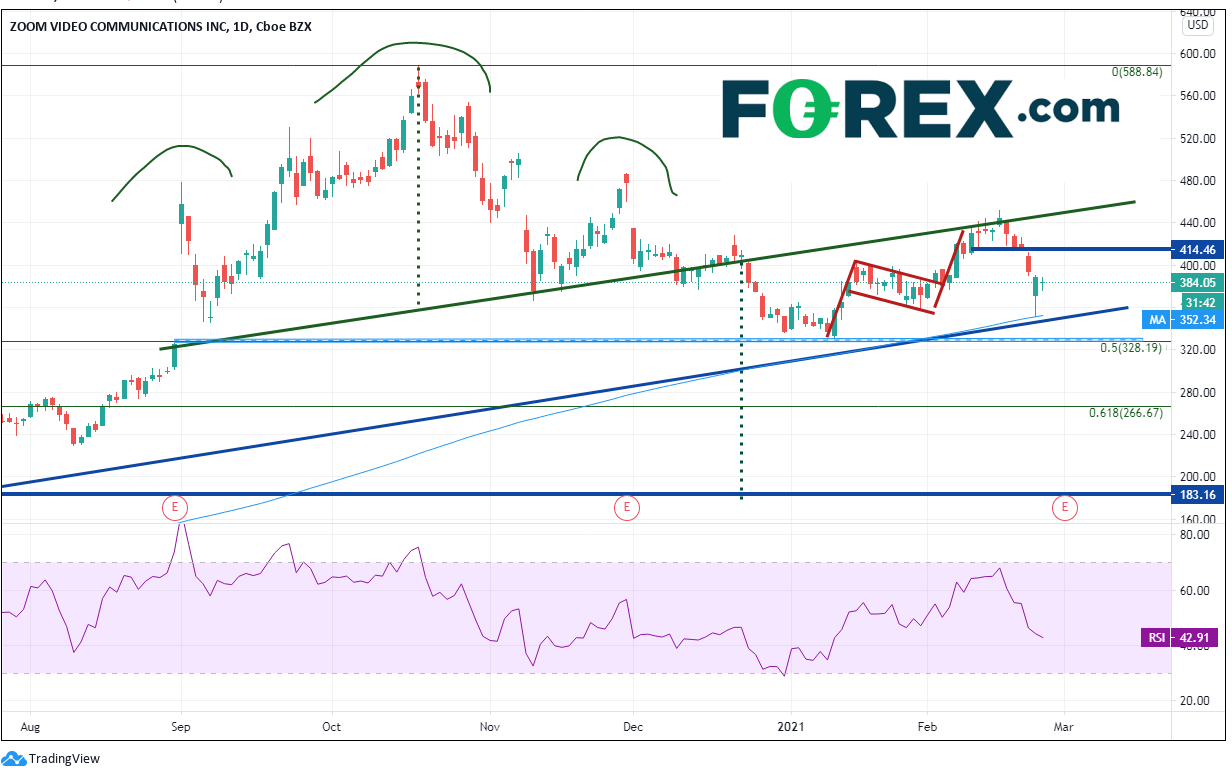 If price breaks below this key support zone, if can fall to the 61.8% Fibonacci retracement level of the previously mentioned timeframe near 266.67. Resistance is at the gap fill from February 23, up to 394.77. Above there, horizontal resistance is near 414.46 and then the confluence of resistance levels from the neckline of the head and shoulders and the February 16th highs near 451.70. 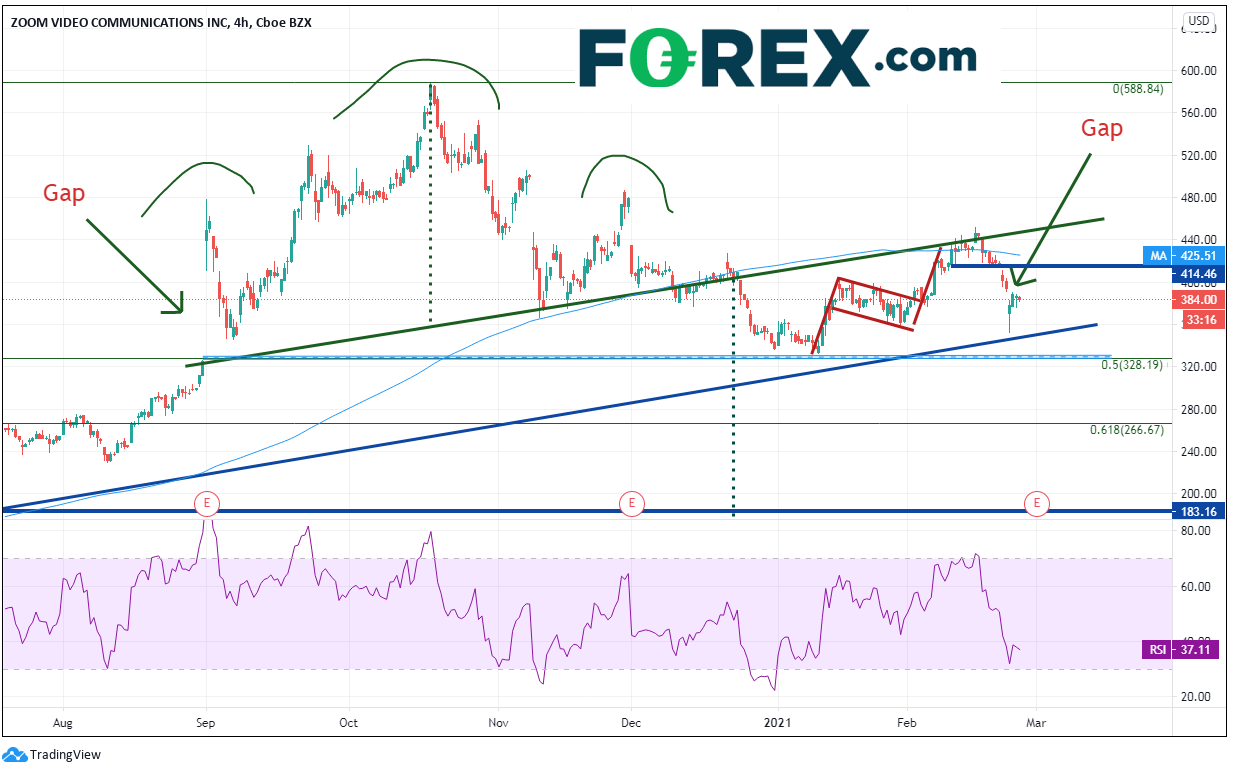 How to trade Zoom shares

You can trade Zoom shares with Forex.com. Follow these easy steps to start trading the opportunities the Zoom share price has to offer.